Buy Photo
The Lucky Dragon No. 5, a fishing boat that was exposed to radioactive fallout from the first hydrogen bomb test at Bikini Atoll, is on display at Yumenoshima Park in Tokyo. (Leon Cook/Stars and Stripes)

Buy Photo
The Lucky Dragon No. 5, a fishing boat that was exposed to radioactive fallout from the first hydrogen bomb test at Bikini Atoll, is on display at Yumenoshima Park in Tokyo. (Leon Cook/Stars and Stripes) 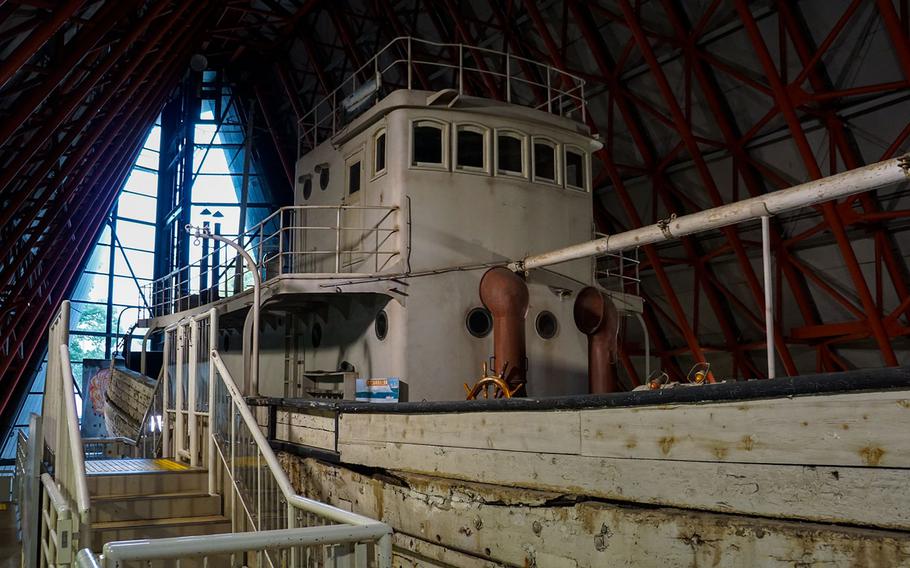 Buy Photo
On March 1, 1954, the Lucky Dragon was fishing near Bikini Atoll when the U.S. conducted the Castle Bravo test of the world's first hydrogen bomb. (Leon Cook/Stars and Stripes)

The Daigo Fukuryu Maru, or Lucky Dragon No. 5, sailed into history in 1954 when it was accidentally exposed to fallout from the U.S. military’s first hydrogen bomb test.

The boat — small for an ocean-going vessel at 97 feet long and 140 tons and only capable of 5 knots — proved anything but lucky during its ill-fated voyage.

On March 1, 1954, the Lucky Dragon was fishing near Bikini Atoll when the U.S. conducted the Castle Bravo test of the world’s first hydrogen bomb. The blast was more than twice as powerful as predicted with 1,000 times the energy of the bomb that leveled Hiroshima. Fallout spread well beyond the no-sail zone, which had been declared in advance.

The fishing boat’s crew reported a flash in the west before ash started falling from the sky. The crew decided to sail away but were covered in fallout during the several hours it took to reel in their costly fishing gear.

The ash — calcinated and highly-radioactive coral from the atoll — coated the fishermen’s hair and skin and got inside their mouths. By the time they arrived at their home port near Tokyo, two weeks later, the entire crew suffered from acute radiation sickness.

All were sent to hospitals, and radio operator Aikichi Kuboyama died several months later. He was the first person killed by a hydrogen bomb.

The incident was an inspiration for the movie “Godzilla,” released that year.

The Japanese government bought the boat and renamed it Hayabusa Maru. After radiation levels abated, it served as a training vessel for the Tokyo Department of Fisheries before being decommissioned in 1967.

The Lucky Dragon sat rotting and forgotten in a garbage heap on Yumenoshima Island until a group of concerned citizens petitioned for its preservation. In 1976, it went on display at the park.

Admission to the Daigo Fukuryu Maru Exhibition Hall, where the boat is displayed, is free. It isn’t much larger than the vessel itself and includes information in Japanese and knick-knacks from the crew.

One of the few English-language signs is outside, next to an unassuming stone monument to the Lucky Dragon’s haul of fish. The ship’s catch was, incredibly, sent to market despite the crew’s condition, and authorities had to scramble to find the radioactive tuna before anyone bought it. They were mostly successful, and the contaminated catch was buried near Tsukiji Market.

The boat is a popular destination for Japanese school trips, but the scarcity of information for foreigners made me glad I’d researched the place before I went.

DIRECTIONS: Located at Yumenoshima Park, the Lucky Dragon is a 10-minute walk from Shin-Kiba Station on the Rinkai Line.

FOOD: No food onsite or in the park, but dining opportunities abound near Shin-Kiba Station.