Father of American teenager missing in S. Korea says last time he saw her was to say good night 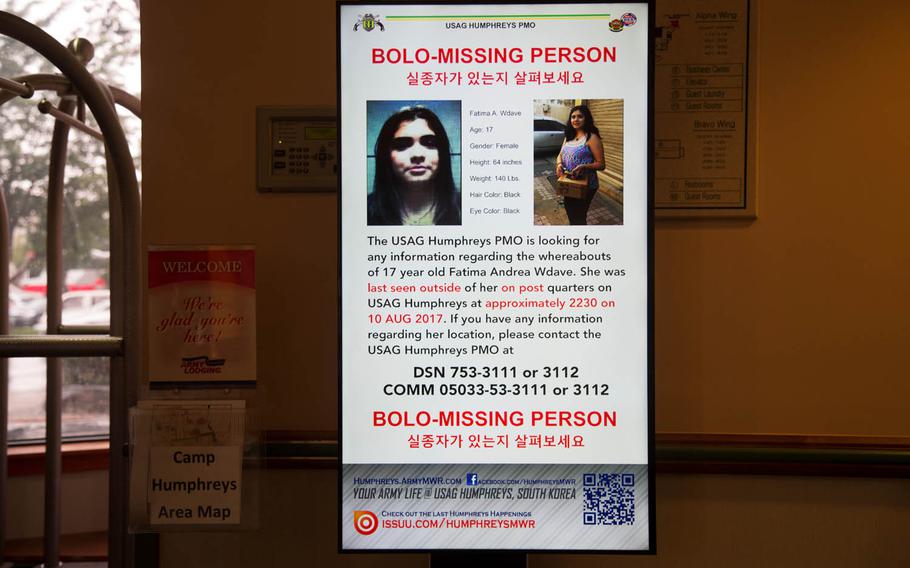 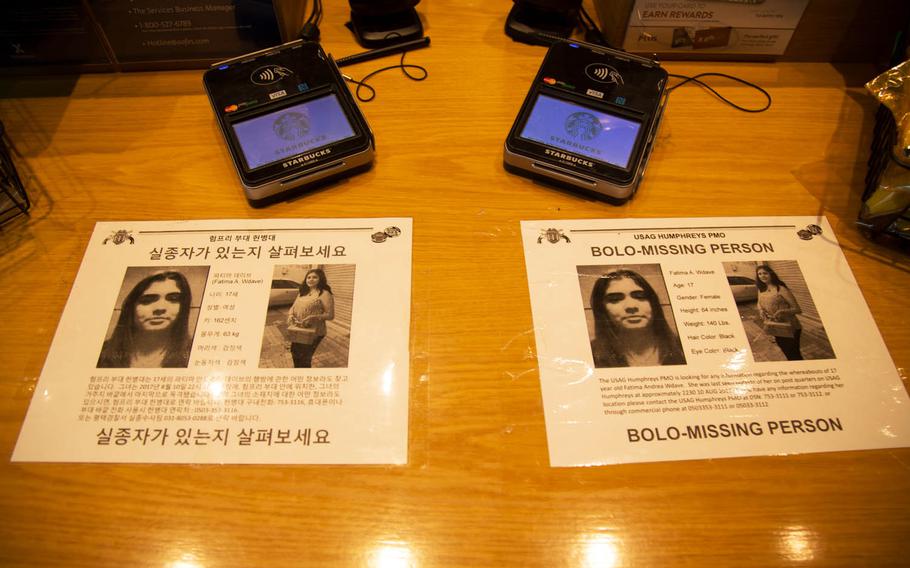 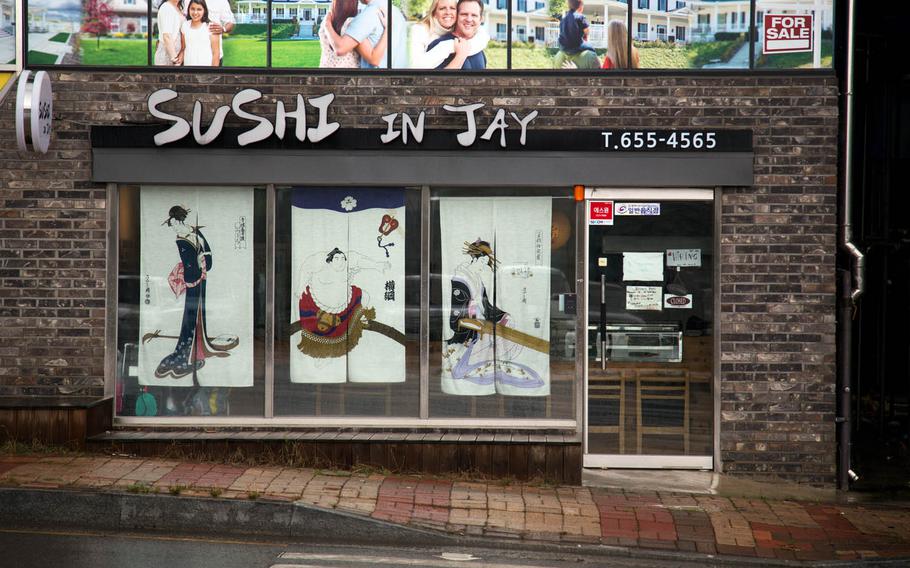 Buy Photo
The U.S. military has put out an all-points bulletin seeking information on the whereabouts of 17-year-old Fatima Andrea Wdave, who it said was last seen at about 10:30 p.m. on Aug. 10, 2017, outside her residence at Camp Humphreys, South Korea. Her father said the family sensed something was wrong after Fatima failed to report to her summer job at a sushi restaurant outside the Army garrison. (Marcus Fichtl/Stars and Stripes) 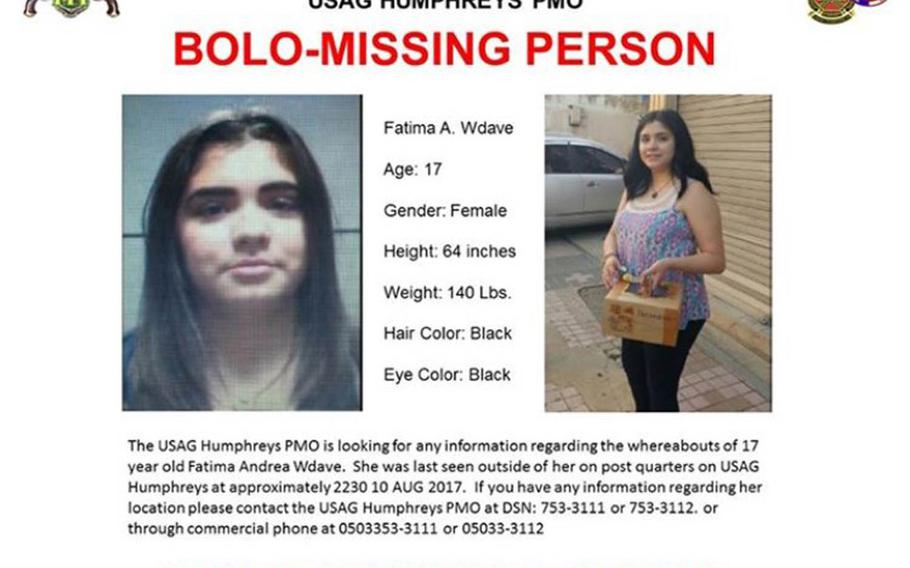 Fatima Andrea Wdave, 17, was last seen outside of her on-post quarters at about 10:30 p.m. on Aug. 10, 2017, according to a notice posted to Camp Humphreys' official Facebook page. (Screenshot from Facebook)

SEOUL, South Korea – The father of an American teenager who went missing from Camp Humphreys more than a week ago says his daughter “is a very happy person” and he and his family desperately want her back home.

The U.S. military has put out an all-points bulletin seeking information on the whereabouts of 17-year-old Fatima Andrea Wdave, who it said was last seen outside of her on-post residence at about 10:30 p.m. on Aug. 10.

Sgt. Francisco Wdave, 39, of El Paso, Texas, said the last time he saw his daughter was to say good night before he went to bed that night.

Nothing appeared out of the ordinary, he said, recalling that “she actually baked some cookies that day.”

The family only began to sense something was wrong the next day when Fatima failed to report to her summer job at a sushi restaurant in the local community outside the Army garrison, he said, adding they waited until Sunday to report her missing in hopes that she was off with friends and would return home.

“We just want her to come back. We worry about her a lot,” he said. “At this point we’re worried we’re not going to see her ever again.”

Military police put out an all-points bulletin known as a BOLO, or “be on the lookout,” to military law enforcement channels “peninsula-wide,” including South Korean national police, and began search efforts after receiving the report on Sunday, garrison spokesman Bob McElroy said.

Investigators have “talked to family and friends, as many people as possible who knew her” and have been monitoring her social media accounts, McElroy said.

Posters and flyers have gone up around the area, and the Army has issued notices on electronic billboards and American Forces Network radio.

Her family has her passport and other IDs so she’s not presumed to have left the country.

“To the best of our knowledge she’s still here,” McElroy said.

Wdave, who is assigned to the 602nd Aviation Support Battalion, 2nd Combat Aviation Brigade, said he transferred to Camp Humphreys with his wife and three other children, ages 20, 18 and 3, from Fort Riley, Kansas, some 14 months ago.

Fatima loved being in South Korea and immersed herself in the culture.

“She’s a very outgoing person. She’s a very happy person,” he said Sunday in a telephone interview from the garrison’s public affairs office.

“She took Korean classes and she started to get a little fluent at it. She practiced it a lot,” he added. “She made Korean friends.”

The family, whose last name is pronounced OO-dah-vay, began to worry when her employer called to say she hadn’t shown up as scheduled.

He said his older kids usually get ready on their own and sometimes leave the house early, so his wife assumed Fatima was at work.

After the call, his wife checked Fatima’s room and everything was normal, except for some missing money.

“At first I thought OK maybe she went shopping or something so we kind of figured OK let’s wait,” Wdave said. But when she hadn’t returned by Sunday, he started making calls.

Camp Humphreys, an Army garrison in Pyeongtaek, about 35 miles south of Seoul, is the site of a years-long expansion aimed at making it the main headquarters for U.S. Forces Korea as part of a 2004 relocation agreement with South Korea.

About 28,500 U.S. servicemembers are stationed on the divided peninsula after the 1950-53 Korean War ended in an armistice instead of a peace treaty.