Father fights to get son's name on memorial 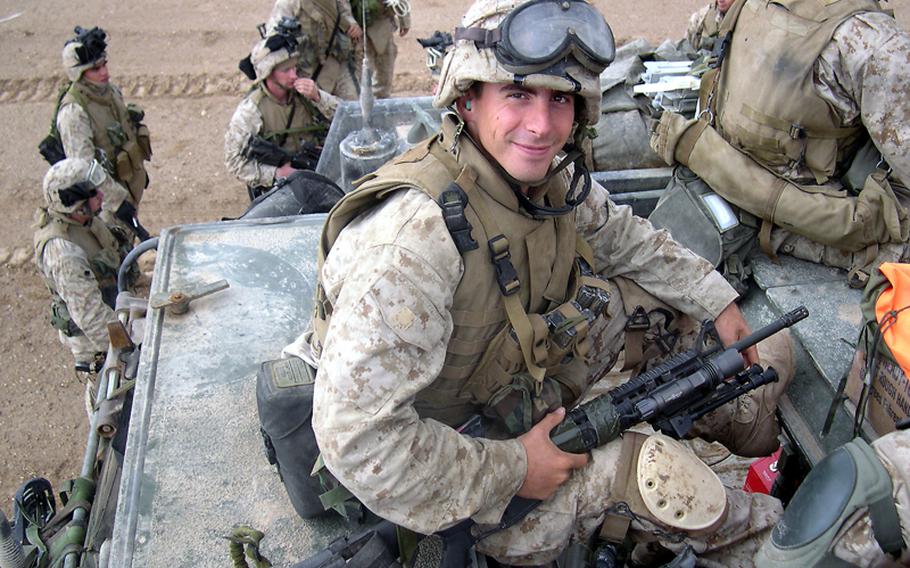 Marine Corps Lance Cpl. Darrell J. Schumann had just finished fighting in Fallujah in January 2005. He was en route to the Syrian border with his unit when the helicopter they were in crashed. Schumann, 25, was killed. A few years later, his father, Rick, discovered that his son&#39;s name would not be included on the Virginia War Memorial in Richmond. Since then, Rick Schumann has fought to get his son&#39;s name and the names of other Virginians not killed in combat onto the wall. He notes that the wall already contains the names of those not killed in combat from previous wars. (Courtesy of Rick Schumann)

The families of servicemembers who die by suicide are not the only ones who struggle to have their loved ones remembered.

Rick Schumann&rsquo;s 25-year-old son, Marine Lance Cpl. Darrell J. Schumann, had just finished fighting in Fallujah, Iraq, when he died on Jan. 26, 2005. He was en route to the Syrian border when the helicopter he was in crashed.

In Virginia, where his family lives, the names of those who lost their lives in combat are inscribed on the Shrine of Memory at the Virginia War Memorial in Richmond.

Since learning in 2008 that his son&rsquo;s name wouldn&rsquo;t appear on the shrine, Schumann has waged a war of his own. He&rsquo;s fighting to add the names of his son and about 30 others who have been banned because theirs were noncombat deaths.

&ldquo;They said it was because they weren&rsquo;t killed in action, they were only killed in accidents,&rdquo; he said. &ldquo;I was very angry, not only for the fact my son wasn&rsquo;t on there but for the 30 or so other names that weren&rsquo;t up there.&rdquo;

Schumann researched the memorial, which goes back to World War II, and found that it included noncombat deaths from previous wars. Of the nearly 12,000 names inscribed there, at least 1,900 &mdash; roughly one in six &mdash; were noncombat-related deaths, according to an analysis that The Virginian-Pilot newspaper did after talking to Schumann.

Still, members of the memorial board &mdash; a mix of state legislators and appointed officials &mdash; maintain that the memorial was intended only for combat deaths.

The memorial board told Schumann that they were following protocol, which allows only combat deaths from Iraq and Afghanistan to be included.

As the policy stands, after the end of the wars, Virginians killed in action will be listed on the Shrine of Memory, while those who died of &ldquo;nonhostile causes&rdquo; will be honored in an adjacent education center, board chairman Jon Hatfield said in an e-mail. He said the board was revising its policy to be more inclusive. The new policy will allow the board to review each case individually, he said.

&ldquo;I believe that the board is very sensitive to wanting to properly honor all Virginians for their service to our country,&rdquo; he said in the e-mail.

The debate in Virginia has also divided the state&rsquo;s veteran groups. Veterans of Foreign Wars officially supports Schumann&rsquo;s position while the American Legion maintains the wall should only be for combat deaths.

Dale Chapman, adjutant for the American Legion in Virginia, did not return requests for comment.

&ldquo;To say somebody who was shot in a battle is more deserving to be put on the wall than someone who was flying into that combat zone who crashes is just absurd,&rdquo; Roesch said.

He said the question of military suicide deaths and their place on the wall is &ldquo;probably the biggest bone of contention&rdquo; between those for and against including all deaths on the memorial.

&ldquo;Personally, when somebody&rsquo;s over there on their second, third, even the first time, there&rsquo;s things that they see and do that people will never know,&rdquo; he said in supporting the inclusion of all war deaths. &ldquo;I would not have any heartburn with that.&rdquo;

Entering the third year of his effort, Schumann remains determined to ensure that people remember what his son gave for the country, no matter how he died.

&ldquo;Had I not lost a son and saw this, I would still be doing this, because this is so wrong on so many levels,&rdquo; Schumann said. &ldquo;I can&rsquo;t stop.&rdquo;