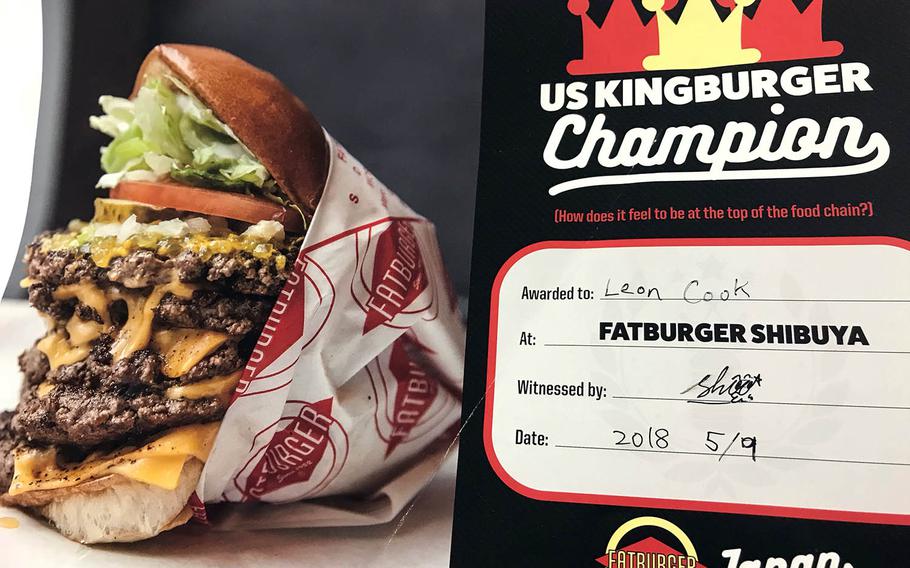 Those who finish the monster, 690-gram Kingburger at Fatburger in Tokyo receive a certificate and their photo on the wall. (Leon Cook/Stars and Stripes)

Those who finish the monster, 690-gram Kingburger at Fatburger in Tokyo receive a certificate and their photo on the wall. (Leon Cook/Stars and Stripes) 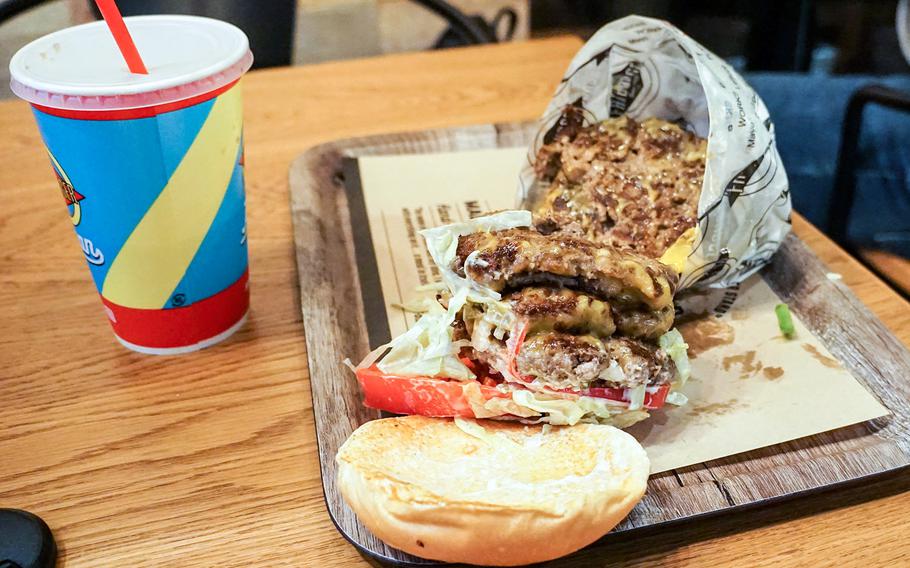 The U.S. Kingburger at Fatburger in Shibuya contains over a pound and a half of beef -- making it not only one of the most massive burgers in Tokyo, but also one of the most difficult to eat as well. (Leon Cook/Stars and Stripes) 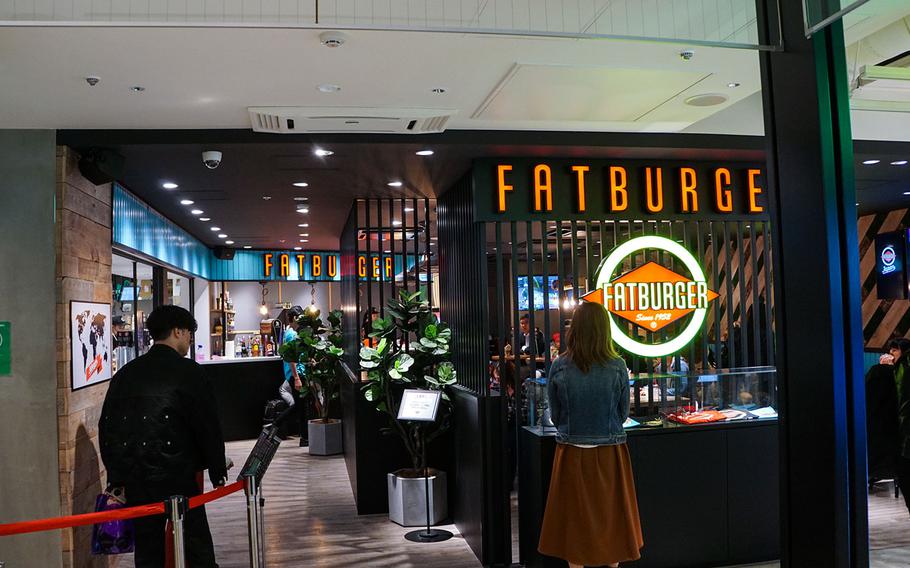 Fatburger, a popular fast food chain from Southern California, opened its first Japan location in Shibuya in April, 2018. The restaurant serves up some of the iconic burger joint's most popular menu items, as well as the Japan-only U.S. Kingburger. (Leon Cook/Stars and Stripes)

Tokyo is a sprawling metropolis filled with thousands of exotic dining experiences, replete with flavors found nowhere else in the world. But, for the city’s many expats, there often comes a time when the local fare simply cannot quell the cravings of something comforting and familiar. When confronted with these hunger pangs myself, hunting down an American-style burger is often the only solution to my food-based homesickness.

Thankfully, Tokyo recently welcomed the arrival of Fatburger — a Southern California-based fast food chain famous for its vast selection of hamburgers, served up in a variety of combinations with multiple patties and a variety of classic burger toppings.

The first Japanese branch of the cult-favorite burger joint, which opened at the Magnet by Shibuya 109 shopping center in the bustling neighborhood of Shibuya at the end of April, seemed like it might just provide the taste of home I was looking for.

But before I could experience Fatburger’s American-style burgers for myself, I’d have to contend with the confusing map on their website — which, at the time of the grand opening, provided an incorrect location for the restaurant, which required I take a 15-minute detour before I ended up at the right place. (Don’t worry, the map has since been fixed.)

Once inside, my hunger directed me towards something called the U.S. Kingburger — a six-patty burger containing a whopping 690 grams of beef for 2,560 yen (about $23). While I noticed the restaurant’s “Wall of Fame” honoring those who had finished the Triple Fatburger featured several lucky diners, not one diner had managed to complete the U.S. Kingburger.

My mind was made up.

Although my editor had suggested I try the behemoth burger before I embarked on my journey, I privately wondered if I wanted to abuse myself (and my body) in such a manner. Yet, the fact no one had successfully attempted the feat before gave me just the resolve I needed.

When the U.S. Kingburger burger arrived at my table, I was shocked at its size. Six hundred-ninety grams is an impressive-sounding number, for sure — but since I don’t think in the metric system, I hadn’t realized that amounted to over a pound and a half of beef.

I also observed that my custom order was, sadly, lost in translation, as the toppings I wanted on the burger were instead subtracted from it. Instead of a cheeseburger with ketchup, mustard and pickles, I ended up with mayonnaise, lettuce, tomato, onions and relish. Undaunted, I removed as many of the unwanted toppings as I could and began my burger challenge.

How does one even eat a burger with six patties? With a bit of ingenuity, of course.

Due to its massive size, my U.S. Kingburger disintegrated as soon as I pulled it out of the paper sleeve. I decided I would have eat the burger instead as two triples, with a half-bun on the bottom and two fingers on the top holding the entire thing together. This, surprisingly, worked well.

The burger itself tasted fine, despite it being the opposite of my usual special order. What I wasn’t prepared for was just how much food I would have to eat to take down the U.S. Kingburger.

I ate the first triple burger without a problem. However, as I started on the second, I soon realized the folly of this culinary misadventure.

Each bite was a gamble — a gamble in which the end result was another chance to keep gambling, or the alternative of losing my lunch in public.

Fortunately, Fatburger, like its American counterpart, offers free drink refills — a rarity in Japan. My unlimited access to soda made washing down the hefty burger much easier.

It took a while, but eventually the final bite arrived. I had done it.

In that moment, however, I felt anything but triumphant. So, I sat for a bit, fighting the queasiness. Eventually an employee walked by and I flagged him down to prove I had indeed conquered the U.S. Kingburger solo.

For my exercise in gastric distress, my picture was placed on the Wall of Fame, and I received a certificate proclaiming me a “U.S. Kingburger Champion.”

But how did it taste?

Fatburger is good — but nothing is truly good when you’re eating far past the limits of your appetite. For me, the challenge was worth it — but because I was the first to do so. If anyone else had already been crowned U.S. Kingburger Champion, I’d have stuck with a double or triple burger instead.

Still, at the end of my meal, I became the first person in Japan to finish the U.S. Kingburger. I have getting lost — and, my growing hunger due to it — to thank.

Directions: From Shibuya Station, take the Hachiko exit. Fatburger is located on the 7th floor of the Magnet by Shibuya 109 shopping center, right next to the Shibuya Crossing.