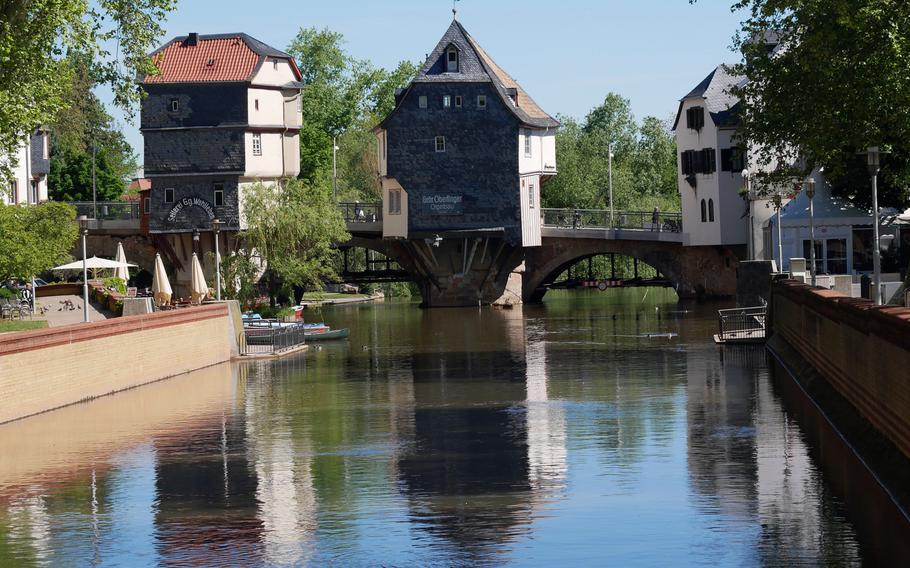 Bad Kreuznach's most famous sight is the old bridge over the Nahe with its Brueckenhaeuser, or bridge houses. The bridge was built around 1300 and the houses about 200 years later. (Michael Abrams/Stars and Stripes)

Bad Kreuznach's most famous sight is the old bridge over the Nahe with its Brueckenhaeuser, or bridge houses. The bridge was built around 1300 and the houses about 200 years later. (Michael Abrams/Stars and Stripes) 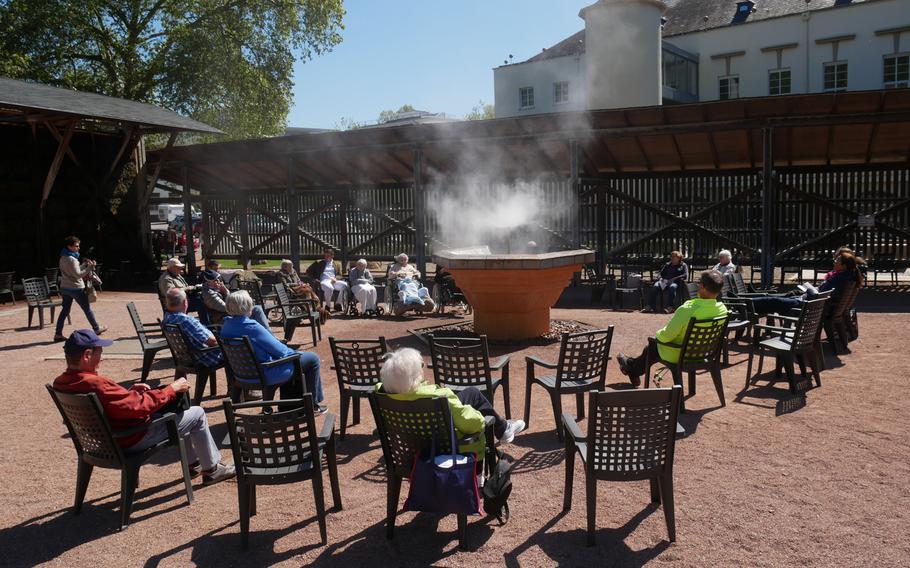 Visitors in the spa quarter of Bad Kreuznach, Germany, inhale the salty mist spewed from the fountain. The city is a popular spa town and salt was produced here for about two centuries. (Michael Abrams/Stars and Stripes) 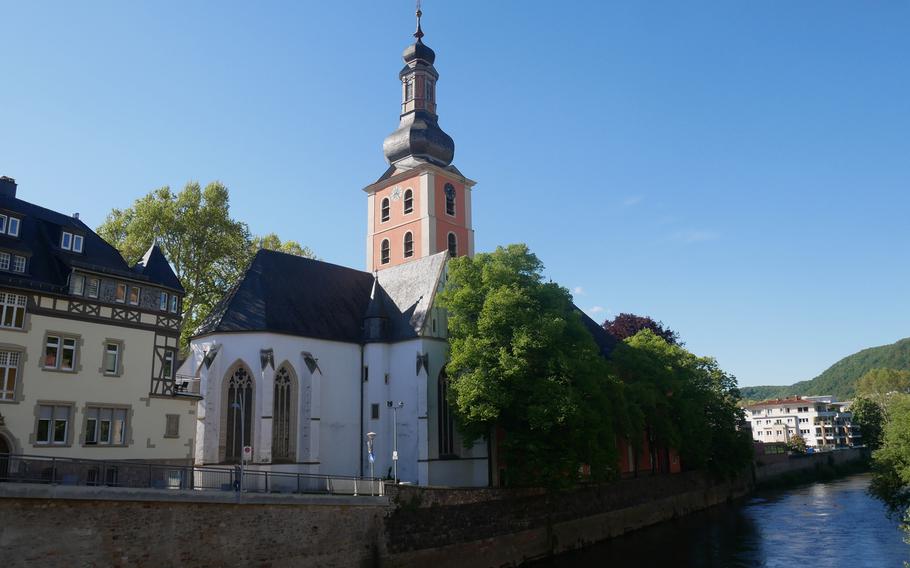 The Pauluskirche looks down on the Nahe River in Bad Kreuznach, Germany. First built in the 14th century, the church was destroyed by the French in 1689 and rebuilt 90 years later. Its baroque steeple is just over 200 feet tall. (Michael Abrams/Stars and Stripes) This statue on the Kornmarkt depicts well-known citizens and animals of the town's past, topped by Marie Probeck, who alerted the townspeople with her horn when fire broke out. A market is held here every Tuesday and Thursday. (Michael Abrams/Stars and Stripes) When the hustle and bustle of downtown Bad Kreuznach gets to be too much, take a walk along the Nahe River. Walk far enough and you come to Salinental, an area that features numerous brine graduation towers used as inhalatoriums. (Michael Abrams/Stars and Stripes) 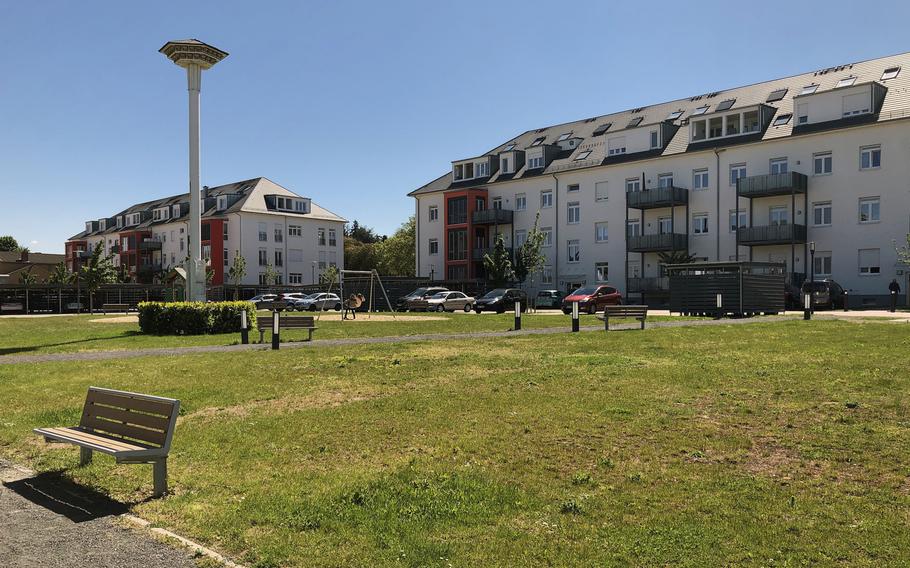 The former Rose Barracks in Bad Kreuznach, Germany, was once home to various U.S. Army units, including the 3rd Armored Division, 8th Infantry Division and 1st Armored Division. The military left the city in 2001. (Michael Abrams/Stars and Stripes) People enjoy the healthy waters of the Crucenia Thermen in Bad Kreuznach, Germany. The thermal spring baths, the center of the town's spa area -- bad means baths in German -- features three salt-water pools and one fresh-water pool for rest and relaxation. (Michael Abrams/Stars and Stripes) 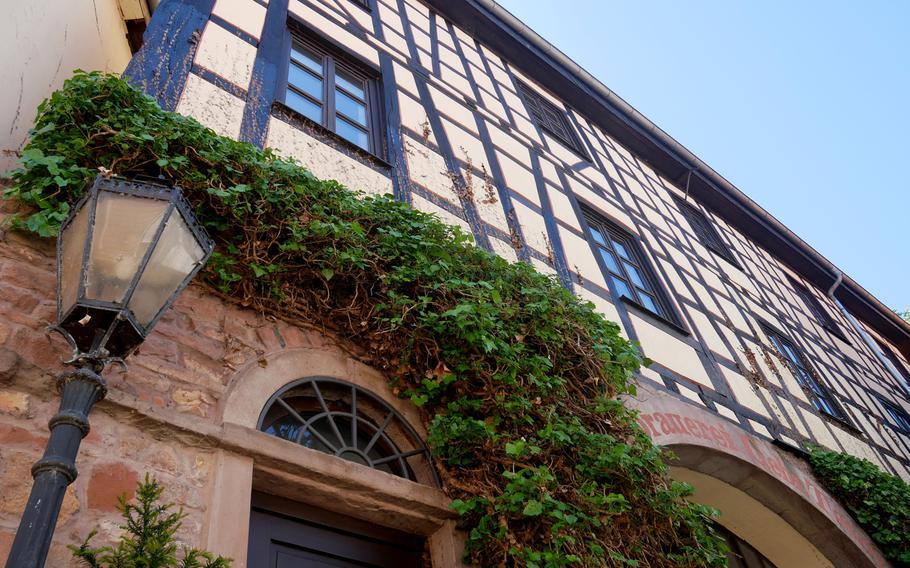 This big, beautiful half-timbered house in Bad Kreuznach once housed a brewery. Now it is a private residence. (Michael Abrams/Stars and Stripes) People walk past a Bad Kreuznach, Germany, monument that commemorates the city's Jews who were murdered by the Nazis. (Michael Abrams/Stars and Stripes) The Kauzenburg was once a castle and is now a hotel and restaurant with a great view of the town. But not a good example of reconstruction of a medieval fortress. Note the vineyards -- Bad Kreuznach is in the Nahe valley, one of Germany's wine-producing regions. (Michael Abrams/Stars and Stripes) 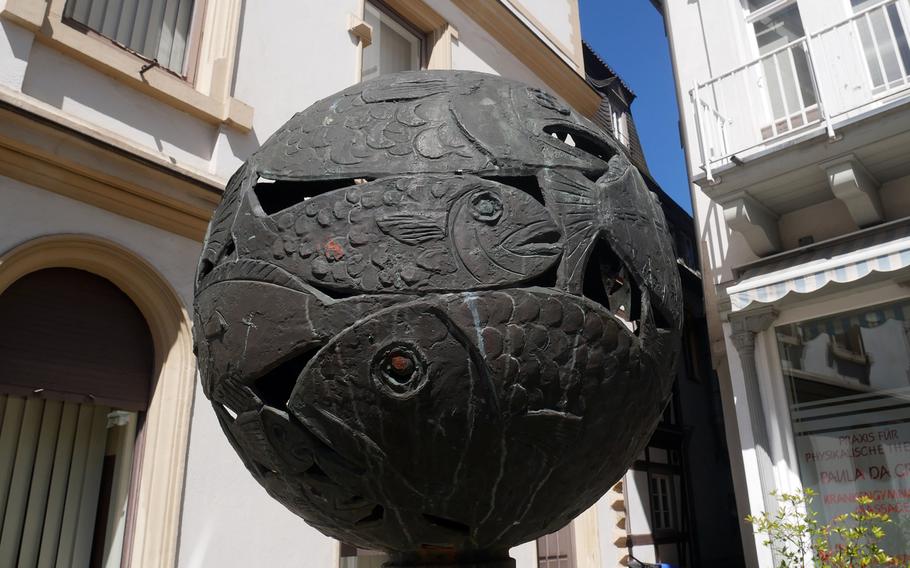 Next to St. Nicholas church is a sculpture that looks sort of like a golf ball, but a closer look shows fish on the ball, marking the spot where a fish market in Bad Kreuznach, Germany, was once held. (Michael Abrams/Stars and Stripes) A view of Bad Kreuznach, Germany's old town. Although since medieval times it known as the "new town," it is home to the city's oldest buildings. (Michael Abrams/Stars and Stripes)

Looking for a place where you can squeeze in a hike, enjoy a spa and do some sightseeing all in a day?

Bad Kreuznach, on the Nahe River, might be just the place.

First, a little history: The Celts lived in the area, and so did the Romans. Like many towns in Germany it changed hands many times over the centuries. For a long time it belonged to the counts of Sponheim, who did much of the medieval building here.

The Swedes occupied Bad Kreuz-nach during the Thirty Years War, and the French later sacked it. The U.S. Army had a long history in the city following World War II, with the 3rd Armored Division, 8th Infantry Division and 1st AD among the units stationed here before leaving in 2001.

The center of Bad Kreuznach has two distinct quarters, the old town and the spa district.

The heart of the old town and its most popular sight is the 700-year-old Alte Nahebruecke, the bridge over the river with houses standing on it, the so-called Brueckenhaeuser.

It actually spans the Muehlenteich, an arm of the Nahe. The north end was destroyed in World War II and replaced with a modern bridge.

From the bridge you see St. Paul’s Church, built in 1332, and its 18th-century baroque tower. It was once the only building on the island formed by the Nahe and the Muehlenteich. Today the island is the center of the spa district.

From here you also have a view of the Kauzenburg, today a hotel, but not a good example of a reconstruction of a medieval fortress.

While walking through Bad Kreuznach, be on the lookout for some of its fountains and sculptures. On the Kornmarkt, where a farmers’ market is held twice a week, stands the Corn Market Fountain that depicts well-known citizens of the town’s past topped by Marie Probeck, who alerted the townspeople with her horn when fires broke out. Next to St. Nicholas church is a sculpture that looks like a golf ball on a tee, but a closer look shows fish on the ball, marking the spot where a fish market was once held.

The Crucenia thermal spring baths, the center of today’s spa quarter, features three saltwater pools and one freshwater pool for rest and relaxation.

There are many marked walking trails in and around the city, but one — the Panoramaweg — takes you past the town’s sights, the Kauzenburg with a great view of the town, and through the vineyards with a view of the baths.

It was the Romans who brought viniculture to the Nahe valley, so if you get a chance, give a Nahe wine a try.

Another nice stroll is along the banks of the Nahe. Walk far enough and you come to Salinental, an area that features numerous brine graduation towers.

Originally these constructs were used to produce salt. Today they are used as inhalatoriums. Visitors inhale the saline vapors, which supposedly clear the respiratory system.

Below the castle is Schlosspark Gardens, which features three museums — the Schlosspark, the Roemerhalle with Roman artifacts, and a puppet museum.

But that’s for another Quick Trip.

TIMES: The Crucenia Thermen is open from 8 a.m. to 9 p.m. daily. The farmer’s market on the Kornmarkt is Tuesday and Friday mornings.

COSTS: Parking in most of the city’s parking garages is 50 euro cents per half-hour. Four hours at the Crucenia Thermen costs 8.50 euros for adults and 4.80 euros for children 3 to 15 years of age.

FOOD: There are plenty of restaurants in all price classes downtown and in the spa quarter.

INFORMATION: The city’s tourism website is bad-kreuznach-tourist.de/en, and the site for the thermal baths is crucenia-thermen.de. The tourist office is next door to the baths.