Buy Photo
A family assembles puzzles as an Albertosaurus stands nearby at Expedition: Dinosaur at the Bishop Museum in Honolulu. (Wyatt Olson/Stars and Stripes)

Buy Photo
A family assembles puzzles as an Albertosaurus stands nearby at Expedition: Dinosaur at the Bishop Museum in Honolulu. (Wyatt Olson/Stars and Stripes) 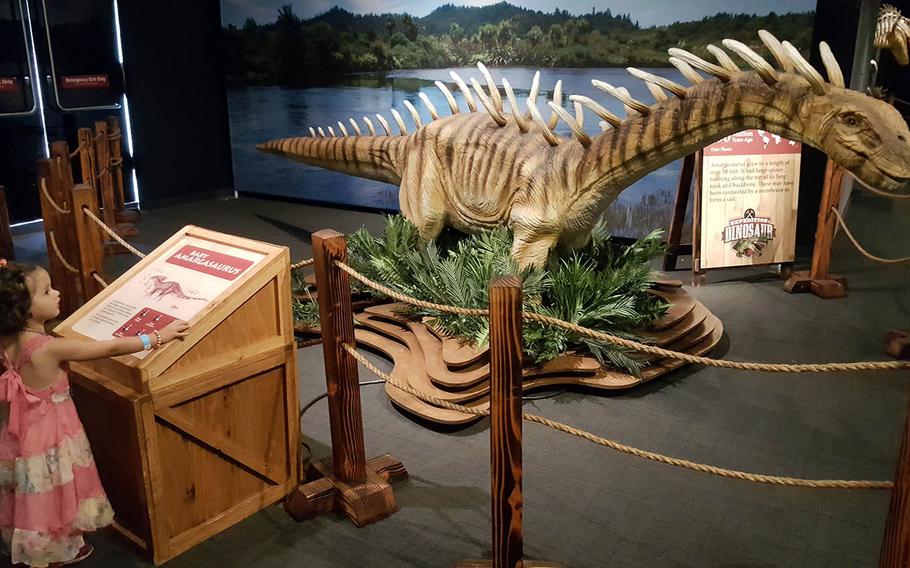 Buy Photo
A visitor at Expedition: Dinosaur at the Bishop Museum in Honolulu moves controls to make the baby Amargasaurus move its head and tail. (Wyatt Olson/Stars and Stripes) 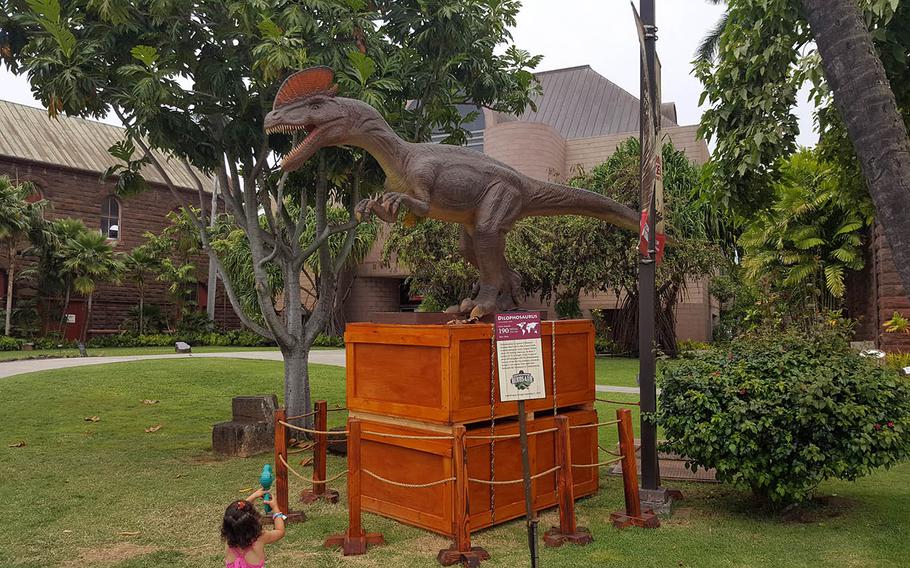 Buy Photo
A prehistoric creature keeps watch outside the entrance to Expedition: Dinosaur at the Bishop Museum in Honolulu. (Wyatt Olson/Stars and Stripes)

I recently tried to explain to a 3-year-old the why and whence of dinosaurs, her newly found object of fascination. I failed.

After all, how can you break down geologic timespans of millions of years, mass extinctions and fossilized remains to someone who doesn’t yet distinguish minutes from hours?

Best to pack up the youngsters and take them to the Expedition: Dinosaur exhibit at Honolulu’s Bishop Museum.

No, it won’t give preschoolers a full understanding of all things Jurassic, but it’ll keep their minds occupied with animatronic dinosaurs, interactive wizardry and video displays.

Dinosaurs captivate kids, but the educational focus of much of this exhibit is how dinosaurs have lured paleontologists — those are bone-hunters, kids — into the field for the past 150 years in a quest to understand these ancient creatures.

Several displays are plastic replicas of fossils embedded in the ground and covered with faux dirt. Kids can use the hand brushes paleontologists use to sweep away the chunks of dirt to discover the dinosaur bones spread below.

Elsewhere there’s a tent set up displaying the tools of the trade, which have remained largely unchanged since the first complete dinosaur remains found in America were dug up and described in 1858.

As Americans moved westward to farm, railroad and prospect, the discovery of dinosaur bones boomed. Robots aren’t taking the jobs of paleontologists. They still wander through remote areas known for hiding bones, searching for newly exposed outcroppings that provide hints to what is underneath.

It’s then the same painstaking process it was in the 19th century, brushing away limestone and dirt so as not to disturb the fossils, screening dirt by the bucket full to capture even the smallest bones.

The exhibit offers some fun tidbits of info.

First, it is not and will not be possible to clone creatures trapped inside prehistoric amber — the method used to create modern dinosaurs in the movie “Jurassic Park.” Amber is porous enough that the strands of DNA are utterly corrupted by the exchange of gases.

Second, fossils aren’t the only thing preserved that gives us an understanding of dinosaurs. Preserved tracks allow scientists to understand their behavior, such as whether they moved in packs. Bite marks on fossilized bones reveal who was biting whom, and how. And fossilized Tyrannosaurus rex poop, for example, shows they only partially digested their meals of meat and bone.

Third, some dinosaurs had scales while others had feathers.

Last, “Billions of dinosaurs laid trillions of eggs during the Mesozoic Era, yet egg fossils are rare,” one placard explained. In general, meat-eating dinos laid oblong eggs, plant-eaters laid round ones.

And speaking of eggs, the “Dinosaur Hatchery” allows kids to maneuver a robotic arm and fingers to grab, lift and move dinosaur “eggs,” in this case the oblong variety.

In other kiosks, kids can trace their favorite dinosaurs or put together prehistoric-themed puzzles.

But it’s the dozen life-sized and lifelike animatronic dinosaurs that are likely to interest — or scare — kids.

Some operate through motion sensors, and when you walk up to get a better look, that Kentrosaurus — which means pointed-tail lizard — swings its head and lets out a blood-curdling scream.

The fiercest looking is the Albertosaurus, a smaller cousin to the famed T-Rex, but still offering up a huge head filled with pointed teeth.

The display of two Pachycephalosauruses is downright comical. The skull of this type of dinosaur looks like a World War II-era Army helmet, and in the display the pair is engaged in a head-butting duel to determine dominance.

Other automated dinosaurs have a series of buttons that let you control their breathing and movements of mouth, head, neck and tail. One of them is the Carnotaurus, the only meat-eating dinosaur yet discovered that had horns.