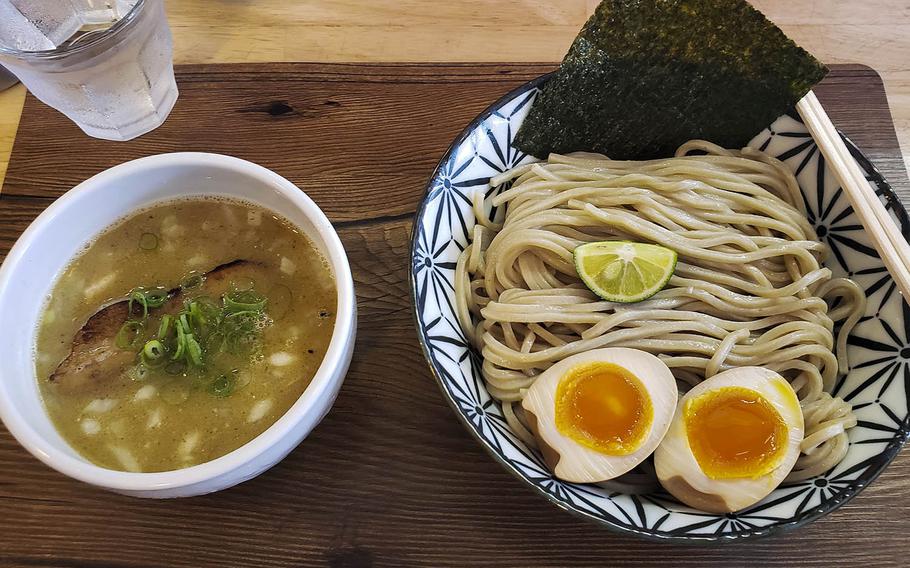 Buy Photo
This serving of tsukemen-style udon from 611 Ramen near Yokota Air Base, Japan, was packed with flavor. (Theron Godbold/Stars and Stripes)

Buy Photo
This serving of tsukemen-style udon from 611 Ramen near Yokota Air Base, Japan, was packed with flavor. (Theron Godbold/Stars and Stripes) Buy Photo
There's no English menu at Ramen 611 in Iruma, Japan, not far from Yokota Air Base, but food here is well worth crossing the language barrier. (Theron Godbold/Stars and Stripes)

Fifteen minutes north of the main gate at Yokota Air Base in western Tokyo you’ll find a tiny restaurant called Ramen 611 that packs a flavorful punch with every bowl it serves.

Located on Route 179, the shop has seating for 16 people at two tables with four chairs each. A counter can fit another eight. You may have to sign in at the entrance and wait until space opens.

As in many ramen shops, ordering is handled by a ticket vending machine at the front door. There is no English menu, so a smart device with a translator on it could come in handy.

Feeling adventurous, I decided to forgo the translation, looked at the prices and decided that for about 10 bucks I should end up with a decent meal. I pressed the 1,050-yen choice and handed my ticket over to the server.

Not long afterward, out came my meal.

Instead of traditional ramen, I ended up with two bowls. One was filled with thick udon noodles freshly cooked with a soft-boiled egg and a slice of lime. A creamy broth with a slice of pork, chives and bamboo shoots filled the other.

Not used to having my noodles and broth separated, I looked around and watched as others ate. I mimed dumping the broth over the noodles to the server. He shook his head and mimed back dipping the noodles in the broth, so I did.

Turns out, this style is known as tsukemen and was developed in the 1960s. I used the thick and creamy broth almost like a dip, the large noodles soaking up the flavors.

The quarter-inch slice of pork belly was the thickest I have ever seen in a bowl of noodles and was seared to perfection, with a slight crisp.

No tea or flavored drink came with the meal, so I chose water.

I have spent more than an hour in line for ramen while in Shibuya, I have eaten a $100 bowl of piranha ramen and have tried numerous chain ramen restaurants, but none have compared to the flavors that I found in this tiny shop off Route 179.

Directions: Turn right out of Yokota Air Base’s main gate, follow Route 16 for about 10 minutes and then turn right onto Route 179 and travel for about five minutes. Ramen 611 will be on your left. The Google plus code is Q9VJ+22 Iruma, Saitama