Buy Photo
A snack bar at the summit of Mount Moiwa is a good place to refuel after spending time outside in the cold in winter. (Seth Robson/Stars and Stripes) 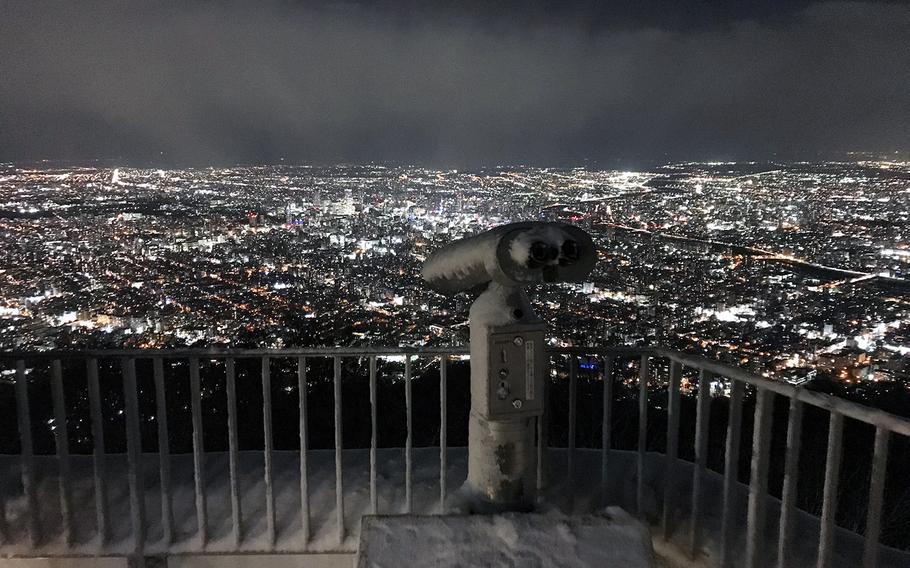 Buy Photo
High above Sapporo, Mount Moiwa offers an epic view of the city to enjoy with family, friends and significant others. (Seth Robson/Stars and Stripes) 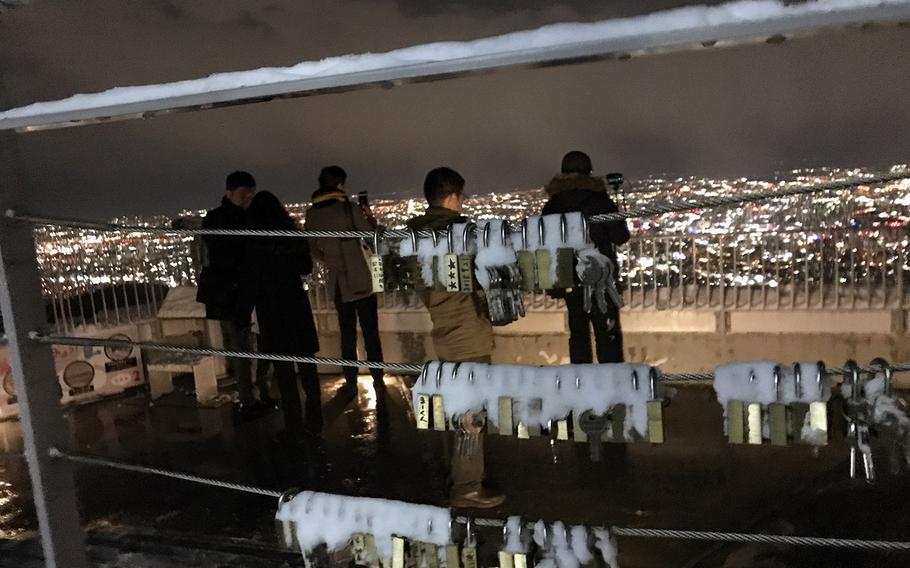 Buy Photo
Couples can lock their love by leaving a padlock near the summit of Mount Moiwa with Sapporo's bright lights as a romantic backdrop. (Seth Robson/Stars and Stripes)

If you fare well in cold weather, or own enough warm clothing, you can experience some spectacular views of Hokkaido’s largest city from the summit of Mount Moiwa.

At 1,742 feet tall, the mountain towers over Sapporo’s western suburbs and offers a panoramic view of the city, Ishikari Bay and nearby peaks.

Visitors can reach the top of Mt. Moiwa by riding the ¾-mile-long Mount Moiwa Ropeway, before transferring to a smaller cable car that stops at an observation platform.

Up here, you might bump into the mountain’s mascot, Mo-risu, who looks a little like the forest-dwelling Totoro from the beloved Japanese animated film “My Neighbor Totoro.” Mo-risu is supposed to resemble the Siberian flying squirrels that inhabit the area — although he doesn’t look particularly capable of flight.

The indigenous Ainu people called this mountain Inkarushibe, describing a place where people climbed up and looked out.

There are five main hiking trails that range in length from about 1.5 miles to 2.8 miles, all of which take visitors through a primeval forest that was designated a national monument in 1921.

On winter nights, you can see countless twinkling lights from the city below while standing on the summit’s viewing platform. How long you’ll spend looking at them might depend on the wind chill and the quality of your cold-weather gear.

Locals flock to the lookout due to its reputation as a popular date spot. Many padlocks left behind by lovebirds, known as “love locks,” hang from a fence at the summit. If you want to leave behind a love lock of your own, they’re sold at a nearby shop. There’s also a large “Bell of Happiness” that visitors can ring, if they’re so inclined.

Those who want a closer look at what’s below can take advantage of the various binoculars bolted to the viewing platform — but after a few minutes marveling at the lights, you’ll probably want to seek shelter and warmth inside.

For those looking to keep warm, the area has a planetarium and The Jewels, a French restaurant with a view. Visitors seeking a quick snack can check out the small shop on site, which sells hot drinks, ice cream and other treats. Despite the low temperatures, the view from Mt. Moiwa makes it worth adding to any Hokkaido itinerary.

DIRECTIONS: From Maruyama Koen Station on the Sapporo Municipal Subway Tozai Line, take the JR Hokkaido Bus (Junkan Maru 10/11) and get off at the Moiwa Sanroku or Ropeway Iriguchi bus stops.TIMES: Winter, 11:00 a.m. to 10:00 p.m; Summer, 10:30 a.m. to 10:00 p.m.COSTS: Adult tickets for the railway and cable car are 1,700 yen (about $15.00), while tickets for children are 850 yen.FOOD: The Jewels, a French restaurant, has a menu that ranges from 900 yen for a pasta salad during lunch to 9,500 yen for a dinner course including local ham, seafood and beef. There is also a small gift shop selling snacks and souvenirs.INFORMATION: tinyurl.com/y75jn2ut