DOD: Money for outside health care could run out this week 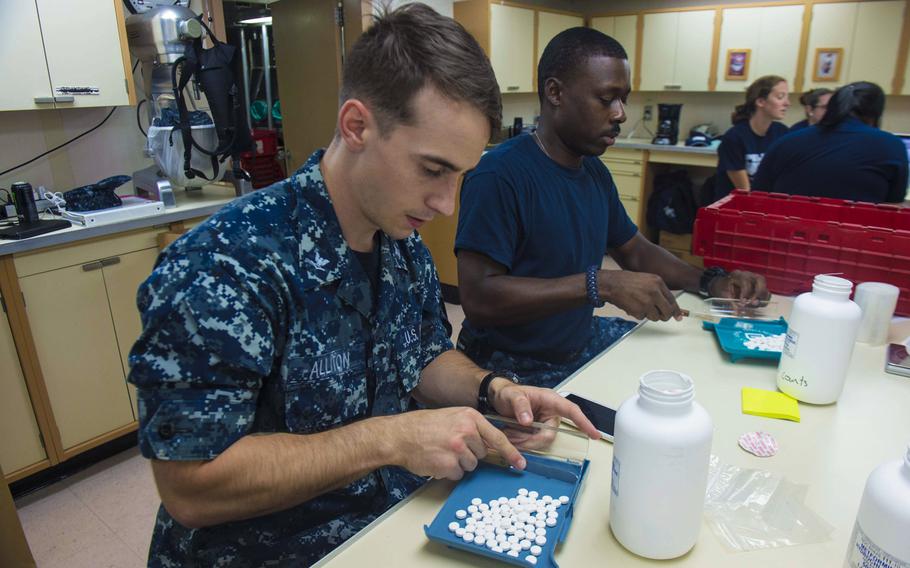 Hospital Corpsman 3rd Class Kory Alliton and Hospital Corpsman 3rd Class Roy Lightner package medications in preparation for the next mission stop aboard Military Sealift Command hospital ship USNS Comfort on July 24, 2015. The Defense Department has warned Congress that by the end of this week its health care system could run out of money to provide outside treatment for troops and dependents. (Brittney Cannady/U.S. Navy)

WASHINGTON — The Defense Department has warned Congress that by the end of this week its health care system could run out of money to cover outside treatment for troops and dependents.

High retail pharmacy prescription costs have carved out a $2 billion shortfall in the military’s worldwide health care system this year, according to a letter sent by DOD Health Affairs to lawmakers on July 16.

The budget crunch underscores the growing cost of providing drugs to an aging group of Tricare beneficiaries and a debate this summer on Capitol Hill over increasing fees to cover the expenses.

Lawmakers in the House and Senate have been divided on higher pharmacy copays. Now, they appear faced with making an emergency fix to the military’s overall health care budget or risking a critical budget shortfall that could affect treatment for troops, families and retirees.

“Without your support, we run the real risk of exhausting funds needed to pay private sector care costs in late July 2015, which could also have negative spillover effects on the direct care system,” Jonathan Woodson, assistant secretary of defense for health affairs, wrote in the letter obtained by Stars and Stripes.

The Defense Health Program, which is facing the $2 billion shortfall and had a $41 billion budget this year, handles Tricare health insurance as well as worldwide medical and dental services to active-duty troops, according to budget documents. Private care includes medical and dental treatment at non-defense facilities.

The DOD has raised the alarm for years over the ballooning costs of health care, prescriptions and other servicemember benefits. Pentagon brass have been urging lawmakers to pass reform measures to curb costs and allow the military to focus on training and warfighting.

Woodson said the department has shifted money with two reprogramming requests to Congress but still needs to move $900 million to cover the shortfall in health care funding, which could also affect treatment at the military’s own facilities.

“If we fail to secure funding proposed in the reprogrammings from the identified sources, the direct care system would likely have to scramble for alternate sources with the potential of causing an adverse impact on operational support and readiness,” Woodson wrote.

The revelation comes as the armed services committees of both chambers of Congress are negotiating its defense policy bill for the coming year and possible increases in Tricare prescription drug copays. On Tuesday, lawmakers were just days away from starting a month-long August recess when they typically return to their states and districts.

The Senate proposed a schedule of pharmacy copay increases that would raise the average copay for a 30-day generic prescription from $8 to $14 by 2024. Sen. John McCain, R-Ariz., is leading conference committee negotiations for the chamber on the National Defense Authorization Act, which may include the changes. His staff declined to comment.

The House has proposed a program to study the savings of using a network of preferred retail pharmacies. Rep. Mac Thornberry, R-Texas, is heading the House side of the negotiations, and his staff did not immediately return a request for comment.

The armed services committees typically do not discuss ongoing negotiations for the National Defense Authorization Act, which sets military priorities and could address the drug costs.