‘Dishonored 2’ delivers 2 heroes for a double dose of action 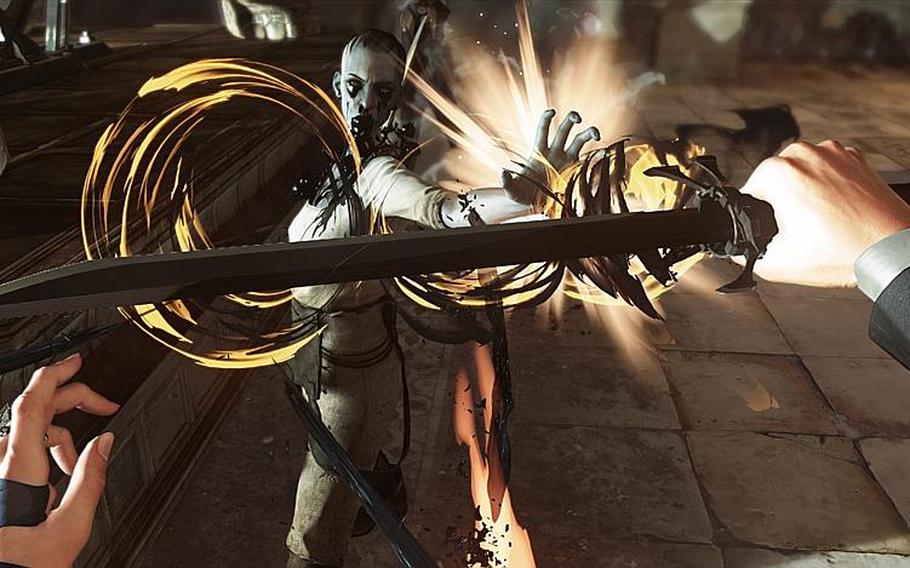 A shadowy avenger once again must find a way to reclaim honor and the imperial throne in "Dishonored 2." (Bethesda Softworks)

Intrigue and betrayal again stalk the rat-infested streets of Dunwall. And once again, a shadowy avenger must find a way to reclaim honor and the imperial throne.

“Dishonored 2” — developed by Arkane Studios for Bethesda Softworks — is set 15 years after Corvo Attano was framed for the assassination of Empress Jessamine Kaldwin, the catalyst for the original game’s action. Since clearing his name, Corvo has raised the young Empress Emily to take her mother’s place on the throne. He also has trained her to take his own place as a royal avenger.

The game opens with talk of a “Crown Killer” who has been murdering enemies of the royal family. Corvo and Emily are chief suspects. However, things get much worse when a dark sorceress appears in the palace and initiates a bloody coup.

At this point, you have to make your first major choice of the game: take the role of Corvo or of Emily.

Emily is nimble and stealthy, using her wits and her abilities to glide through a mission like a shadow. Corvo is sturdier and better able to face enemies with a swift blade. However, he’s not a heavyweight who can take on a room of soldiers single-handed. He, too, needs to rely on stealth and cunning to a large degree.

“Dishonored 2” offers many more choices as it progresses. You can decide whether to base your gameplay on stealth or brutal combat, or a combination of the two. You can choose whether to use the supernatural powers granted by the otherworldly Outsider, or rely on your natural abilities. And almost every challenge and encounter can be approached in multiple ways.

As a result, you’ll probably want to play this game several times to experience all it has to offer.

The game unfolds in a series of missions that focus on tracking down coup plotters. Each mission requires climbing up, over, under and through buildings, tunnels and alleys as you try to locate your target and avoid unnecessary entanglements. Along the way, there are clues to discover and puzzles to solve.

An assortment of guards, gangsters, vicious animals and mechanical soldiers also stand between you and success. It’s your choice whether to carve a bloody trail or sneak undetected toward your goal.

Weapons include sword, pistol, crossbow, grenades and mines. If you decide to take the lethal route, the takedowns can be extremely brutal, with severed heads and limbs littering the ground afterward. Those taking the more humane route will rely on evasion, sleep darts and choking foes into unconsciousness. Keeping the kill tally low keeps a lid on chaos in the empire and leads to a brighter ending for the game.

In addition to foes, each map is packed with hidden “bone charms” and “runes” that will help you increase your abilities.

“Bone charms” are totems that give you a slight advantage, such as the ability to hold your breath underwater or take less damage when falling or enhance your supernatural powers. “Runes” unlock or improve supernatural abilities. Depending on which character you choose to play, these include the ability to teleport, slow down time, see through walls, mesmerize foes, possess animals and people, summon a doppelganger to fool enemies, summon a pack of killer rats or link opponents together so that the fate of one becomes the fate of all (i.e. if you stab one, they all die of stab wounds).

The game can get pretty intense when you pour all of your abilities into one quick assault. Imagine sneaking into an area as a rat, slowing time to attack a few foes and then teleporting to safety before anyone else is aware of your presence. It can be downright exhilarating.

No matter how you balance your use of stealth, combat and magical abilities, the missions are engaging and exciting. Paths are always complex and puzzles intriguing — at least on the first playthrough. And even though you might know most of the secrets when you begin a second playthrough, it will be radically different if you change your play style. Taking the nonlethal path is radically different from playing with lethal intentions. And it gets even more challenging if you avoid using magical abilities.

The graphics are very stylized but do an excellent job of depicting the decaying steampunk settings and menacing inhabitants of Dunwall and Karnaca.

The movement and ability controls are very smooth and efficient. The combat controls seem a bit sluggish, but that simply encourages you to rely more on stealth.

The game earns a mature rating for its extremely brutal combat.

“Dishonored 2” delivers an exciting adventure and a multitude of options — every one of them satisfying.