'Diablo III': Devilish fun with the Lord of Terror Blizzard takes the opportunity to let loose with neon blues, greens and purples when the magic flies in battle, but in the muted moments, the color scheme is understated and drab. (Courtesy of Blizzard)

Blizzard takes the opportunity to let loose with neon blues, greens and purples when the magic flies in battle, but in the muted moments, the color scheme is understated and drab. (Courtesy of Blizzard) 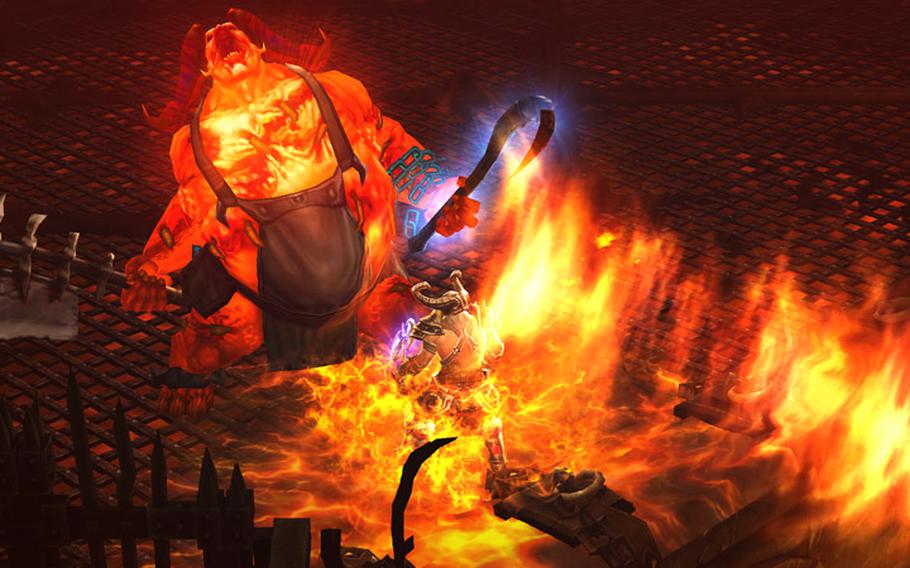 The action is generally more zoomed out than this, but the fire is pretty representative of your stay in hell. (Courtesy of Blizzard) 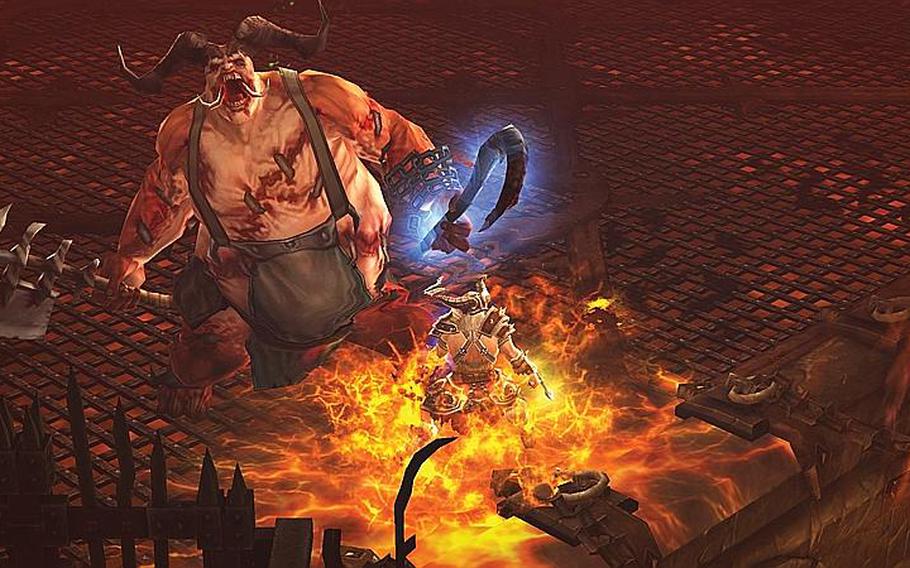 It's been 12 long years since the last time I told this girl scout I didn't want any cookies. (Courtesy of Blizzard)

Is there a thing such as love at first sight? I don’t think I believed in such a possibility until I was recently fighting the minions of hell with a little dart gun. Suddenly, one kill too many put me over the level 3 threshold. A help box appeared at the bottom of the screen. A new option highlighted next to my dart gun: “Corpse Spiders.”

Curious, I selected it. There is no penalty for experimenting with this new ability, the game told me. As I closed the tech tree menu, my character reeled back and hurled a jar at the next mindless skeleton wandering my way. The jar broke, and out popped several large spiders, all of which attacked the confused victim. I, too, was confused. Did I really just throw pottery full of arachnids, who were under my side, at that fleshless spawn?

Yes. And it turns out I’ve got an inexhaustible amount of jars, all full of spiders, to back it up. Oh my, I thought, I might be in love.

Despite its dark premise, “Diablo III” is a game both extremely whimsical and fun. The story has been told over the previous two games as a bleak, end-of-days plot of mortals doing their best to contain a war between upper echelons of heaven and hell — containing the souls of things in crystals and turning on each other in the process. That melodramatic, convoluted story is somewhat concluded in this third entry into the series, but it’s also wonderfully marginalized.

Much of the long, morose background is optional — seemingly hidden away, actually. There are still many pretty CGI movies to watch — developer Blizzard does those with an even greater eye for detail than the animation studios at Square-Enix or Pixar — but they still need to work on their delivery, characters and cliche-catching before we start giving out any storytelling awards.

That’s all forgivable, however, when you balance throwing a jar of corpse spiders, releasing trios of exploding frogs and summoning walls of zombies to fell the minions of hell. “Diablo III” has stripped away everything from this series that was tedious, and by doing that, is able to add scores of more interesting things for players to manage and fall in love with.

Of all the improvements “Diablo III” makes, the most remarkable is the ability to remake your character on the fly. One of the most frustrating things in modern RPGs, be they massively multiplayer or traditional, is the exploration of the skill tree. Decisions you make early on can literally ruin your character 40 hours down the road. That’s a lot of time wasted and a lot of time players have to put back into the game to restart. “Diablo III,” ingeniously, says to hell with all that. Let’s just have some fun.

In the game’s default configuration, each character has six skill slots. Each slot has three to four abilities to assign, and each of those abilities, unlocked as you progress in character level, has ‘rune’ modifiers that change the abilities themselves. This might seem intimidating if it weren’t for Diablo’s freewheeling approach to the skill tree. In many games, picking the wrong ability means your whole character is wasted. You’d have to spend a lot of gold or go somewhere to rebuild. Instead, you’re free to pick anything you’d like to try on the fly. Want to stop using endless spiders and go back to shooting darts? No problem. In fact, each skill is balanced so as not to be replaced by later unlocked abilities. The darts are just as powerful as the spiders or frogs, they just attack and behave in a different way.

The streamlined stuff doesn’t stop there. You no longer have to click on gold to pick it up; weapons all take up the same amount of space in your inventory; town portal spells are free to cast; identifying a unique dropped item no longer means going back to town and buying some scroll — now just click it and wait a few seconds.

With all these changes, Blizzard has recognized the weaknesses of the series so far. All of the punishing decisions have been stripped away; all that’s left is your ability to manage yourself and just have fun with some friends in the hellscape.

Speaking of multiplayer, “Diablo III” seems to think of itself as a single-player game that happens to have a cooperative option. One player hosts the game and up to three friends can join. The game smartly drops all notions of chronology when going into co-op mode, allowing players to play ahead of where they’ve been in the game, or go back as far as necessary to play with a friend. For those of us without any friends, a handful of friendly townsfolk rise to the occasion throughout the game. These helpers can be equipped with a small assortment of your weapons, and there’s no real penalty when they die.

The control improvements are slight, but remarkable for a PC game. Many years ago, first-person shooters set the standard control style for pretty much all PC titles. Many other genres, especially RPGs such as Diablo, have bucked conforming to that, spreading important keys across the QWERTY landscape, and making it more difficult to access things quickly without a lot of touch memorization.

“Diablo III” gets extra credit for embracing this keyboard standard, however. Left and right click do two of your attacks, while the 1-4 number buttons do the rest, and Q quick-heals. It might seem slight, but it’s hugely important when juggling those large amounts of unlocked abilities. “Diablo III” nails the controls, and that’s what allows the rest to shine through.

The fun doesn’t stop after the first time you fell the lord of terror, either. “Diablo III” keeps you hacking and slashing after that with four basic draws: five character classes to explore; better loot in harder, unlockable difficulties; new spells (I beat the game at level 30 in 20 hours, but characters continue to unlock abilities until they max out at level 60); and a cavernous crafting system that even includes an online marketplace for buying and selling loot for real dollars.

It’s too early to see exactly if this will stop the “grinding” black market — playing for nothing but loot and gold, then selling that on eBay — but there’s a solid chance it will set a precedent other games will want to follow. It might eventually offer players the chance to skip the endless grinding for a small fee. It’s difficult to see how this will change the game’s economic landscape long term, but bringing the whole system off of eBay and into the light is definitely a good idea.

Left with the story in the marginalized category are the actual graphical demands of the game. There’s not a whole lot of visual evidence that this is a top-tier game from 2012. "Crysis 2" or "Skyrim," it is not. Blizzard takes the opportunity to let loose with neon blues, greens and purples when the magic flies in battle, but in the muted moments, the color scheme is understated and drab.

This fits well with the dark tone of the story, but it doesn’t give a lot to write home about in the eye-candy category. It seems that the developers instead decided to focus on a lot of enemies on the screen, providing you with a flurry of magical spells to get them out of your way, and a lot of breakable surroundings to make it all just a bit more believable.

The only part of the “Diablo” formula that didn’t get as much revision as it needed was the game’s level structure. Dungeon quests are as they ever were: go here, trigger this, report back to a townsperson with your progress. Even the settings of Acts I and II, a damp swamp and desert, seem ripped straight out of the “Diablo II” playbook.

These two contrast sharply with the game’s third act, which pops a sense of urgency as it showcases scene after scene of moving pieces and auxiliary action you’re not a part of. This act really shows interesting ideas about where the series can go, and I can only hope the inevitable expansions mimic this act more than anything else.

Honestly, though, it doesn’t matter how repetitive the game’s structure is — all you’ll want to do is get to the next area, find a horde of demon spawn and test your multitasking mettle with a flurry of rabid dogs, giant frogs, walls of zombies, hands from the ground, bouncing fire bombs, acid clouds, and a small army of spear-wielding devils.

Bottom line: “Diablo 3” drags point-and-click dungeon crawlers into the next generation with a streamlined interface and a frictionless upgrade tree.