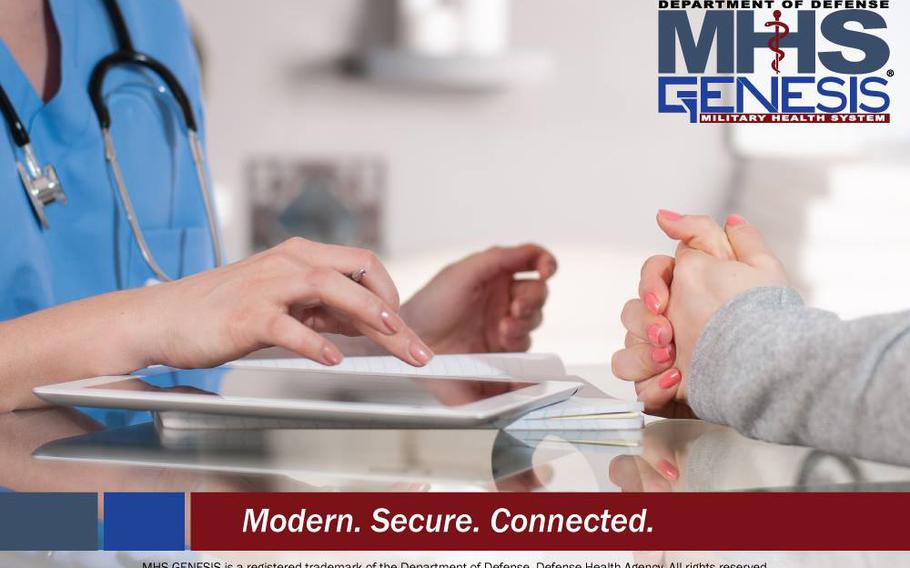 MHS Genesis still needs capabilities added, software kinks eliminated and design changes made to achieve optimal workflows for every medical specialty. But it will improve staff efficiency over time and has improved patient safety, she said.

“For me, charting is much quicker. The open documentation in the patient portal is a huge benefit for patients to see, as part of their health care record and their health care in general. We can see lab [results] easier. We can communicate with each other and our nurses a lot easier. I can leave at the end of the day with no records or charts open because I’ve closed them all during encounters with patients. And that was huge for me,” Alderson said.

Admittedly Alderson might be more comfortable with MHS Genesis than some other providers testing the new system. In the past year, she has attended two conferences where Genesis’ full potential was displayed including enhanced wearable technology, virtually delivered health care and clinical decision support.

“All this makes AHLTA look so antiquated, with how slow it is and how little you can do with it,” Alderson said. Genesis “really will allow us to grow into a very beautiful electronic health record. We just need to get it stabilized and working for us at the basic level, and then those other steps will come along.”

I asked to interview a care provider who has used Genesis for months after hearing conflicting reports of how satisfied staff are with the new system at IOC, or initial operational capability sites, in the Pacific Northwest.

In January Rep. Phil Roe, R-Tenn., chairman of the House Veterans’ Affairs Committee, visited the first MHS Genesis test site, the hospital on Fairchild Air Force Base, Wash., and said the Department of Veterans Affairs might have made a mistake choosing to piggyback onto Genesis to replace its own legacy system.

Roe told me Fairchild physicians complained that so little patient data transferred to Genesis from AHLTA that providers would have to rely on both systems for years. This, Roe feared, would mean higher costs than planned and could hamper the efficiency of physicians if they frequently had to consult the old system for patient histories.

Alderson, however, said that hasn’t been her experience. Indeed, she hasn’t had to log on to AHLTA since Oak Harbor began testing Genesis last July.

The biggest challenge for care providers, said Col. Michael L. Place, commander of Madigan Army Medical Center (on Joint Base Lewis-McChord, Wash.), another IOC site for MHS Genesis, is learning how to use the new system optimally.

“Every clinic, every specialty, does things a little bit differently, so they have to explore how to make that work for them. Everything — from entering data, to compiling data, and learning from the system to make themselves more efficient and improve performance — it’s really a learning cycle they have to go through iteratively,” Place explained during a recent press conference that the Military Health System hosted to describe the latest developments with MHS Genesis.

Available by phone were executives responsible for implementing the $4.3 billion, 10-year contract to modernize the military’s health care management system. Deployment is led by Leidos Inc., which is combining the popular commercial record systems of Cerner Millennium for medical and Dentrix Enterprise for dental care.

When MHS Genesis went live at Madigan last year, Place said, primary care providers could treat only 60 percent of their usual number of patients given the time involved in re-creating family and medical histories. They have since recovered to 88 percent of previous patient loads and “we set criteria to make sure we safely go up to 100 percent,” he said.

It is true, Alderson said, that a minimum amount of patient data in AHLTA is formatted in a way to transfer to Genesis. Consequently, patients seen for the first time after Genesis went live were advised to arrive at Oak Harbor 20 minutes early so medical assistants could input family and personal histories into the new system.

It irritated some patients, she conceded. Comments were heard “like, ‘I’ve been a patient in the system for 20-plus years. Why do you not have that all in there?’ And we understand the frustration. But it actually is creating much cleaner documentation for us.”

Alderson said the goal is not necessarily to see more patients in a day with Genesis. Primary care physicians, she said, still want 15 to 20 minutes with each patient even if charting time is reduced from, say, four minutes to two.

“But what I think the system allows, and we have to test it fully, is the virtual health option,” she said, having patient encounters online without them being physically present. “This system may allow us to do that so we can add on like six virtual patients to our day. We haven’t started yet but have the potential.”

Currently physicians will review patient responses to questions used to re-create medical histories in Genesis before they enter examining rooms, and occasionally they will notice that medical histories aren’t captured in full.

“We will say, ‘Hey, I see your blood pressure is high but they didn’t say that you have hypertension. Am I missing something,’ ” Alderson said.

The goal ultimately is do charting in exam rooms, with providers asking “patients face to face and be charting in live time. And, actually, some providers are doing that. But usually the corpsman or medical assistant will ask social or medical history and [physicians] will confirm if those are accurate, and make sure we’re not missing anything, especially when we go to diagnose someone.”

Importantly, embedded in Genesis, is a link to the Joint Legacy Viewer (JLV), a tool familiar to health care providers in the Department of Veterans Affairs. They have used JLV for years as a platform on which patient information from AHLTA can be loaded and reviewed without logging into AHLTA.

So, while Alderson hasn’t used AHLTA since last July, she said she has used the JLV from time to time to view a patient’s “past labs, past treatments or medications if the patient isn’t sure what they were on.”

JLV can be harder to use than AHLTA, she said, and sometimes physicians “find something in AHLTA that they can’t find in the JLV. I think that’s the biggest issue. If it’s easy to find a diabetic lab in AHLTA and you’re struggling to find it in JLV, I can see where that would be a potential problem or frustrating.”

Alderson said developers are working to make the JLV more user-friendly and to make sure physicians using MHS Genesis know how to use the JLV.

“I never even knew how to use JLV correctly, so that might be a big part of why people are getting frustrated with it,” she said.

Genesis is “provider centric,” Alderson said. Nurses or other non-physicians, for patient safety, must do more screen clicks than they did under AHLTA to access data. And some specialists including dentists and pharmacists are making a huge leap from paper charting to their first experiences with electronic records, she said.

Genesis “is still in its infancy,” she added. “There is still stuff to work out, to modify, and they’re focusing on that. It’s not perfect and we knew it wouldn’t be. But for patient safety, this is the way to go.”

Alderson predicts that providers trained on the new system won’t look back fondly at the old. And yet some will have to return there because Genesis won’t be deployed across all of military health care before 2022.

“I don’t look forward to going back to AHLTA,” said Alderson. If and when assigned to a hospital that still uses AHLTA, she quipped, “I’ll be pulling out my hair. It will be slow and cumbersome. Oh, it will be awful.”