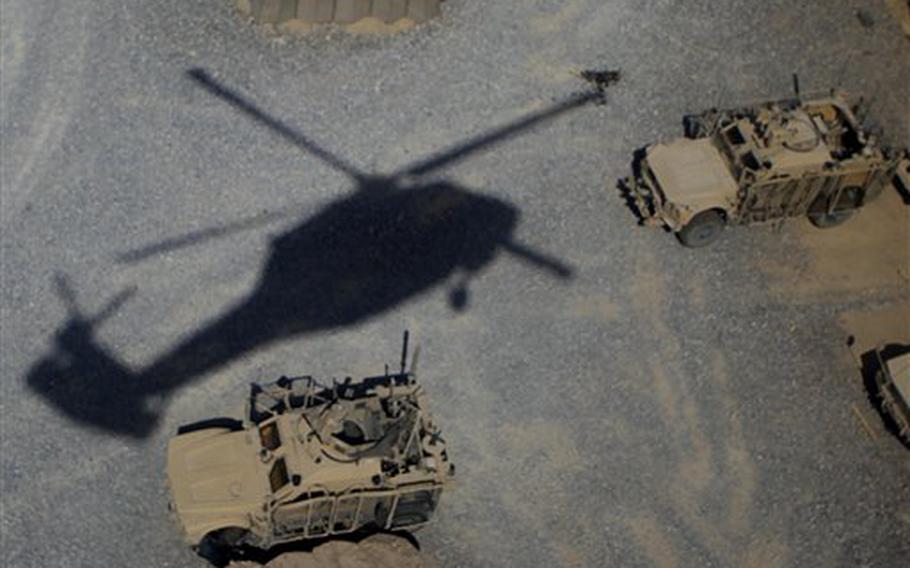 The shadow of a helicopter is shown as the aircraft comes in for a landing on the outskirts of Kandahar, Afghanistan, on Aug 5, 2011. (Rafiq Maqbool/AP)

WASHINGTON - Though America&rsquo;s adversaries will furiously spin the Taliban&rsquo;s shooting down of a U.S. helicopter on Saturday that took the lives of dozens of elite troops, it&rsquo;s unlikely to affect the strategy of special operations forces bearing an ever-increasing burden in the war on terror.

At least 17 members of the Navy&rsquo;s secretive SEAL Team 6 were killed in the Tangi Valley of eastern Afghanistan&rsquo;s Wardak province, along with a crew of Army special operations aviators.

Seven Afghan commandos were also reported killed in the crash of the CH-47 Chinook helicopter.

It&rsquo;s the second incident in three months to drag the special ops war out of the shadows and into the international spotlight.

The first was in May, when members of the same two units flew covertly into Pakistan to kill terrorist mastermind Osama bin Laden and spirit away his body.

Al-Qaida and its allies will argue that Saturday&rsquo;s tragic counterpoint to the bin Laden raid shows that SEALs and others aren&rsquo;t invulnerable, and that insurgents in Afghanistan and elsewhere can go toe to toe with America&rsquo;s best, said Paul Pillar, former CIA Counterterrorism Center director.

But such bluster won&rsquo;t change the basic strategy of the war, said Pillar, now director of graduate studies at Georgetown University&rsquo;s Center for Peace and Security Studies.

&ldquo;This one costly incident, though obviously very disturbing, is unlikely to affect judgments about the need for, and effectiveness of, special operations forces in the missions they currently perform,&rdquo; he said in an email interview. &ldquo;The shooting down of the helicopter was not due to any fundamental shortcoming in special operations themselves.&rdquo;

The public never hears about the vast majority of raids special operators conduct nightly against high-value targets in Afghanistan and Iraq. It&rsquo;s such an important part of overall U.S. operations that even as other Pentagon functions come under scrutiny for painful budget cuts, Department of Defense leaders have signaled their desire to spare special operations budgets.

But the Taliban and their allies will take their good fortune against America&rsquo;s first string in Afghanistan and try to run with it, said Juan Zarate, former deputy national security adviser.

&ldquo;This will certainly be spun by the [Taliban] and [al-Qaida] as an important strike back at the forces that have been pummeling their networks in Afghanistan and that took out [Osama] bin Laden,&rdquo; wrote Zarate, now senior counterterrorism adviser at the Center for Strategic and International Studies, in an email interview.

Within the United States, the political fallout is likely to be limited, because &ndash; tragedy notwithstanding &ndash; almost no one questions the value of the work these troops, Zarate said.

The tactic of helicopter night raids won&rsquo;t stop either, a military expert said.

Concentrating a number of troops in a helicopter has inherent risks, said Jim Gavrilis, a security consultant and former Army Special Forces office,. But even the loss of such a high number of troops isn&acute;t likely to alter how the military operates in Afghanistan.

As the drawdown of regular forces begins, the role of special operators is only likely to escalate further, as signaled by President Barack Obama, who highlighted the contribution of special operations to the war in a June speech outlining his drawdown plans.

The Pentagon likewise has increasingly devoted itself to ramping up the role of special operations. The 2010 Quadrennial Defense Review directs increases in Special Forces infrastructure, according to a Congressional Research Service report released in March.

Since Sept. 11, 2001, U.S. Special Operations Command manpower has nearly doubled, the budget has nearly tripled, and overseas deployments for the ranks have quadrupled, the report states.

SOCOM&rsquo;s fiscal2012 budget request is $10.5 billion, a seven percent increase over the fiscal 2011 budget request, according to the report.

In the short term, however, the loss of so many SEALS who had been deeply enmeshed in the fight in Afghanistan and elsewhere is going to have an operational effect, Gavrilis said.

Stars and Stripes reporters John Vandiver and Geoff Ziezulewicz contributed to this story.