Buy Photo
The brisket fries appetizer from La Mesa Flying Geckos in Pyeongtaek, South Korea, offers a taste of both sides of the menu: Mexican and smoked meat. (Matthew Keeler/Stars and Stripes)

Buy Photo
The brisket fries appetizer from La Mesa Flying Geckos in Pyeongtaek, South Korea, offers a taste of both sides of the menu: Mexican and smoked meat. (Matthew Keeler/Stars and Stripes) 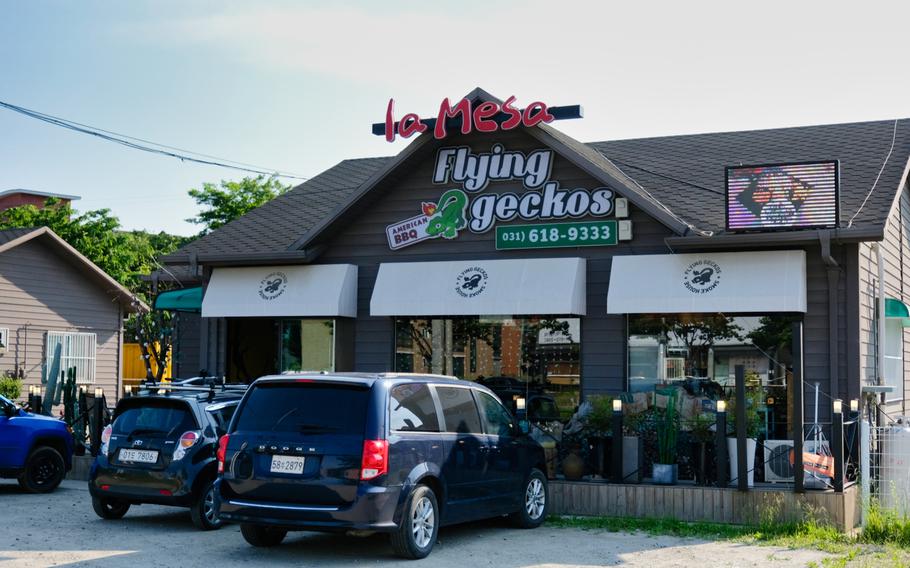 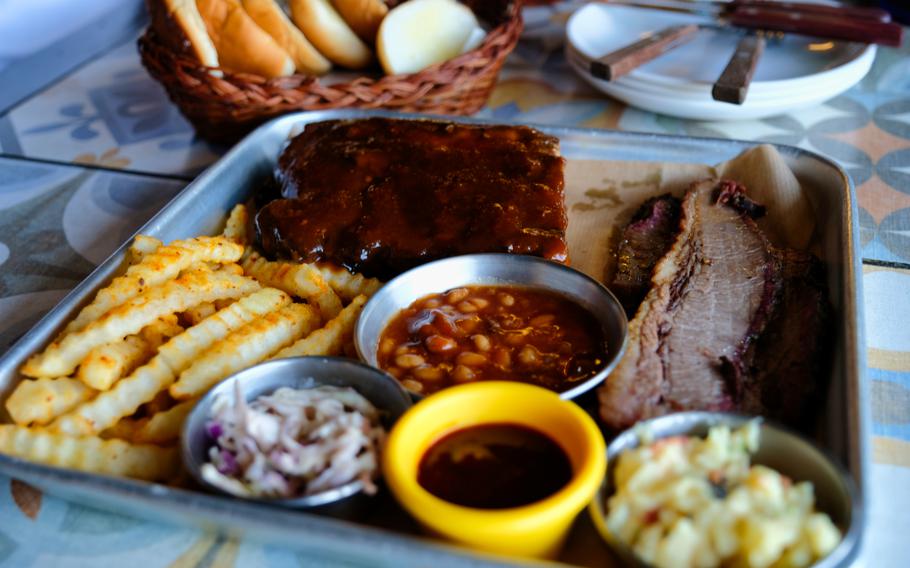 Buy Photo
The ribs and brisket platter for two from La Mesa Flying Geckos in Pyeongtaek, South Korea, is a combo worth sharing with friends or family. (Matthew Keeler/Stars and Stripes) For those living on or near Camp Humphreys, it’s difficult to overlook the large building outside the pedestrian gate that belongs to the La Mesa Mexican restaurant.

The popular sit-down restaurant had its name plastered on nearly every exterior wall. Unfortunately, as restrictions were enforced to protect personnel from the spread of the coronavirus in March, the restaurant closed its doors for good when its lease expired.

The good news is that all is not lost. La Mesa’s owners merged its Mexican-inspired menu, along with its staff, with Flying Geckos, another restaurant they own nearby, closer to the Dongchang-ri gate.

Established about a year ago and becoming a success for its smoked ribs and brisket, Flying Geckos absorbed what remained of La Mesa, said manager Hong Jae-sun, and has since rebranded as La Mesa Flying Geckos.

The restaurant is open year-round; doors open every day at 11 a.m. and food orders are accepted until 9:30 p.m. The bar, which serves a wide variety of beer and cocktails, will remain open until the last customer leaves, Hong said.

The idea of a Mexican-style menu merged with an assortment of smoked barbecue initially posed a personal quandary: Which item to choose? But I came for the smoked meat and forced myself to look past the chicken tacos, my favorite dish.

Sharing a meal with my wife, we agreed on the ribs and brisket platter for two for 35,000 won. The meal came with multiple sides, including fries, pork beans, coleslaw and buttered toast, enough to satisfy us both and bring a few scraps home to our favorite pup.

The meats were extremely tender, as you might hope for from a smokehouse. The ribs and pulled pork are smoked for four hours, the brisket is smoked for 11 hours and the chicken entree is smoked for two hours, according to the chef.

The house sauce smothering the ribs, while tasty, has a slight Asian inspiration. A very small amount of spices was detectable, but not overpowering.

The establishment has plenty of space and an additional building to host larger parties just next door. The patio provides outdoor seating with large umbrellas, a flower garden, a swing and an open view to watch the sun set over Camp Humphreys.

Bring your friends, family or co-workers as their English menu has something to potentially satisfy anyone, even the kids. Flying Geckos’ menu includes various pizzas, pastas, salads and calzones, each for roughly 15,000 won.