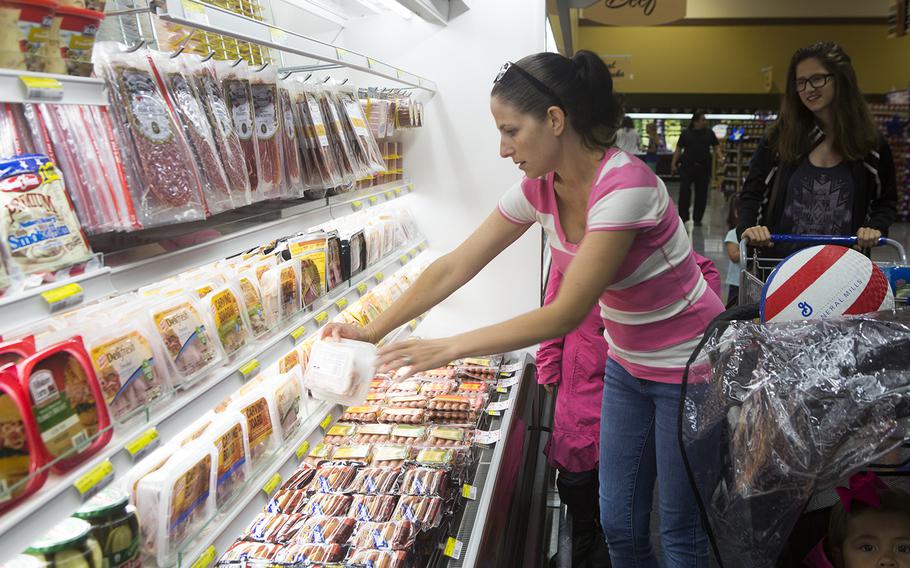 Commissary shoppers will see no drop in savings on brand-name items even as the Defense Commissary Agency begins to offer better prices through its own private-label products, said DeCA Director Joseph H. Jeu.

“We will be maintaining overall savings on branded products, so if patrons choose not to purchase a private label they will still be at least as well off as they were previously,” Jeu explained. “Patrons who do choose to purchase private label will see their cost for the basket of goods they purchase come down further.”

Jeu’s assurances appear timely as patrons and advocates grow concerned over the rapid changes planned to store operations. They see DeCA as unfamiliar with developing and marketing private-label products. Meanwhile, some suppliers complain of their prices being challenged, their shelf space reduced or their products deleted from commissary shelves.

“Our priority is preserving the value of the benefit, which essentially is the savings customers see when they shop,” said Eileen Huck, deputy director of government relations for National Military Family Association. “But we also care about the customer experience in terms of number and quality of products on shelves.”

“There seems to be a whole lot of change going on,” Huck said. “Some [supplier] relationships, once they’re undone, are we going to be able to build them again? At what point does this inevitably go too far to do that?”

Against such concerns Jeu described in fuller detail changes occurring to commissaries. He did so in an emailed letter after reading our column on aggressive price negotiations DeCA conducted with product suppliers. He and DeCA staff also provided written responses to 30 follow-up questions.

DeCA is narrowing the number of national-brand items it sells on advice from industry experts who argue “over-assortment” creates inefficiencies in sourcing and stocking, and crimps shelf space for high-demand items, leaving popular products too often sold out.

Narrowing the assortment also creates space for private labels, which DeCA plans to introduce next April or May. Patrons at some stores already have been asked for their opinion on some DeCA label designs.

Even as stock selection narrows, Jeu said, “commissaries will continue to carry a wider product selection than many private sector retailers carry today.” Shoppers still will see “a wide variety of price points and brands.”

In deleting “lower-performing items or brands,” Jeu said, DeCA is making “each of these decisions thoughtfully and based on careful data analysis, including sales and unit volume, savings, shelf space productivity and patron loyalty. We realize some industry members attempt to frame this as a major impact and negative for patrons, but in reality the changes will be subtle and any brand truly relevant to our patrons’ loyalty will remain prominent.”

To hear DeCA criticize its current operations in comparison to outside retailers startles some patron advocates. It reflects a shift in goals for Congress and Department of Defense officials toward lowering DeCA’s $1.3 billion annual appropriation while promising to preserve the value of the shopping benefit.

“DeCA’s mission has never been the same as traditional retailers,” Huck said. “It’s always been to deliver high-quality groceries at low cost to families, and not worry so much about generating revenue.”

DeCA now sounds like revenue is a priority, Huck said. And while it expects to achieve it by squeezing better prices from vendors, she said, “our concern is that patrons are going to pay that price one way or the other.”

Boston Consulting Group is providing DeCA with expertise to offer private labels and to press for better prices from suppliers. But it is wrong, Jeu said, to characterize the current BCG agreement as a “no bid contract.”

That “connotes that a contractor does not have to submit an offer or that the offer is not reviewed and negotiated like other contracts,” Jeu said. “This contract was a sole source contract, awarded under one of the exceptions to the competition requirements [that] allows an agency to enter negotiations with a single firm if, in the interest of economy and efficiency, the new work is a logical follow-on to an original competed contract.”

BCG still had to submit an offer and have it evaluated and accepted. In accordance with federal acquisition regulations, the proposed award, justification and approval were posted appropriately and Congress notified.

The maximum potential payout to BCG from sharing in savings gained through price negotiations with manufacturers is capped, Jeu said. DeCA can’t release the cap amount until the award fee is determined, he added.

“Any savings realized in excess of the cap are 100-percent retained by DeCA, both in the base year of the contract and for the savings achieved in years thereafter. The savings cap provides a one-time, one-year investment from which DeCA will benefit for many years.”

Huck said shoppers would want the lower prices of private-label goods but it’s “an open question whether DeCA will be able to deliver a high-quality product people want to buy. They don’t have any experience in that aspect of the business.”

“The risk is they’re taking shelf space away from products [patrons] have demonstrated they do want to buy. In the process, it sounds like they’re alienating relationships with manufacturers. I wish them every success because the benefit depends on it,” Huck said.

Steve Strobridge, director of government relations for Military Officers Association of America, said Congress, in ordering DeCA to operate like a business, put language in law to preserve the value of benefit. And perhaps only retail experts can judge the effectiveness of steps DeCA is taking. But there’s concern on hearing vendors grumble about a changing relationship.

“Vendors have done a lot to generate savings for commissaries,” Strobridge said. “They stock shelves. They [give] the same best prices they give to the biggest retail grocers. They donate money to scholarship programs.”

Will this support continue, Strobridge asked, when DeCA competes against brands using private labels and presses for more price breaks, which aren’t to benefit shoppers but rather to cut DeCA’s annual appropriation?

“The reality is DOD has been authorized to do these things,” Strobridge said. “We’re entering unexplored territory [with] potential for unintended consequences.”

Retired Army Maj. Gen. Richard E. Beale Jr., former director of DeCA, counts himself among the doubters that DeCA can operate like a commercial retailer in a quest to slash DeCA’s appropriation and still protect the benefit.

“I have been out of the business for over 15 years,” Beale said. “However, no amount of tinkering with stock assortment, shelf space allocation, supplier price quotes and variable pricing authority will offset to any significant degree the loss of DeCA’s appropriated dollars.”