Critics: VA IG oversight is complicit in retaliation, out to protect agency 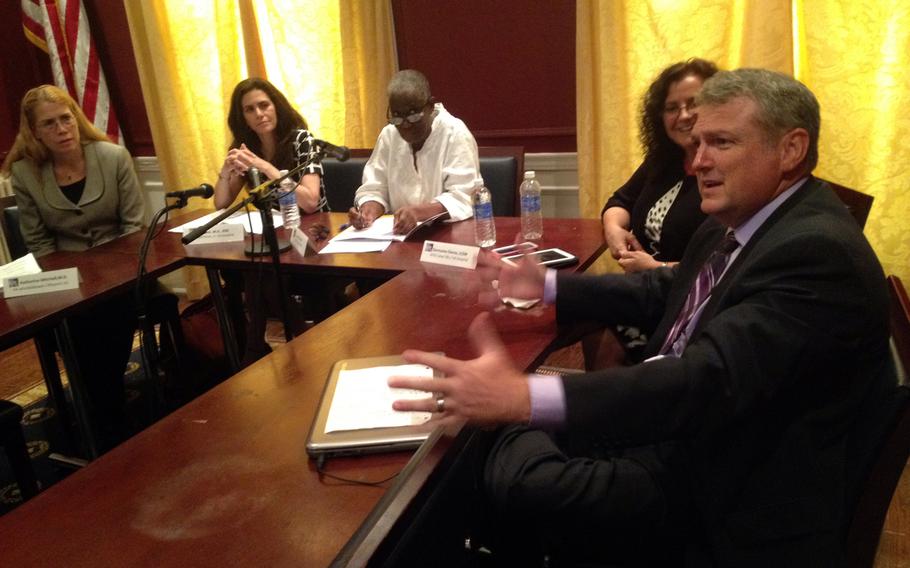 Buy Photo
Shea Wilkes, foreground, addresses attendees of the Whistle Blower Summit in Washington, D.C. on Wednesday, July 29, 2015. Wilkes and 3 other former or current Department of Veterans Affairs employees who have spoken out about malfeasance within the department shared tips on how to report problems. (Heath Druzin/Stars and Stripes)

WASHINGTON — Amid a call for Department of Veterans Affairs employees to report wrongdoing, whistleblowers and a government watchdog warned senators Thursday that the agency tasked with investigating those claims has been complicit in retaliation.

“There is such a vested interest in suppressing negative information” at the VA Office of Inspector General, Phoenix VA physician Katherine Mitchell told a Senate subcommittee.

Mitchell helped uncover the nationwide scandal in veterans care more than a year ago, and said her name was leaked to her superiors after she filed a confidential complaint with the VA Inspector General. She and three other VA whistleblowers gave or submitted testimony Thursday to the Senate Appropriations Committee’s Subcommittee on Military Construction, Veterans Affairs and Related Agencies, claiming that the IG office has been more likely to go after those who report wrongdoing than to find fault with senior officials.

The office, which has been without a permanent inspector general for 18 months, has been heavily criticized for reports that whistleblowers and lawmakers have characterized as whitewashes, and for being slow to release some damning reports. Then-acting VA Inspector General Richard Griffin resigned under pressure in June.

“We must ensure that VA employees who speak out be protected,” Sen. Susan Collins, R-Maine, said at the hearing.

Whistleblowers said the misconduct was particularly alarming given a recent call by the IG office for concerned VA employees to come forward, with a promise of protection some believe the office can’t or won’t provide.

Danielle Brian, executive director of the independent government watchdog Project on Government Oversight, said the Office of Inspector General issued a subpoena to her group, asking for the names of VA employees who had come forward. Brian said the steady stream of whistleblowers coming to her office slowed to a trickle after news of the subpoena. The group has refused to provide the list.

“We believe the VA IG is an example of oversight at its worst,” Brian said.

Deputy Inspector General Linda Halliday acknowledged the subpoena, issued before her tenure, which she said was to get information on patient care problems rather than to persecute whistleblowers. Pressed twice by Sen. Mark Kirk, R-Illinois, to withdraw the subpoena, Halliday said she will “take that under strong consideration.”

“We take this seriously, our responsibility not to disclose the identity of an employee,” she said.

Halliday said she has taken steps since taking over the office less than a month ago to further protect VA employees who speak out. But, she said, sometimes their superiors find out their identities through other sources.

“I’m continuing to reevaluate our business practices to ensure they provide adequate (whistleblower) protection,” she said. “We’re not on anyone’s side, we’re here to find the truth.”

The VA Office of Inspector General has been under fire since its report findings last year that said secret wait lists and patient delays in the Phoenix VA Health Care System could not be linked to patient deaths. Griffin eventually reversed his opinion on under intense Congressional questioning.

Shea Wilkes, a Shreveport VA social worker in Louisiana who submitted testimony to the Thursday hearing, said that without a strong IG office, meaningful change across the VA will be impossible.

“Until you have a truly independent office to hold the VA accountable, you’re never going to see changes,” he said. “They have to appoint someone who has impeccable integrity and is not afraid to stand up to the good old boys.”