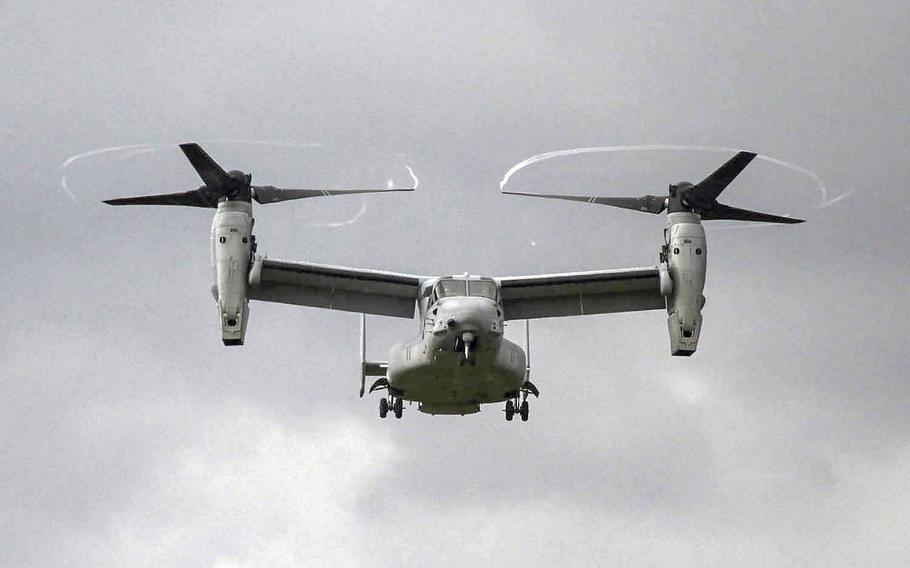 An MV-22 Osprey lands in helicopter mode Oct. 31, 2015, during exercise Blue Chromite 16 in Okinawa, Japan. The Osprey is a tiltrotor aircraft capable of carrying large loads at fast speeds and for longer periods without refueling than conventional helicopters. (Matthew M. Burke/Stars and Stripes)

An MV-22 Osprey lands in helicopter mode Oct. 31, 2015, during exercise Blue Chromite 16 in Okinawa, Japan. The Osprey is a tiltrotor aircraft capable of carrying large loads at fast speeds and for longer periods without refueling than conventional helicopters. (Matthew M. Burke/Stars and Stripes) 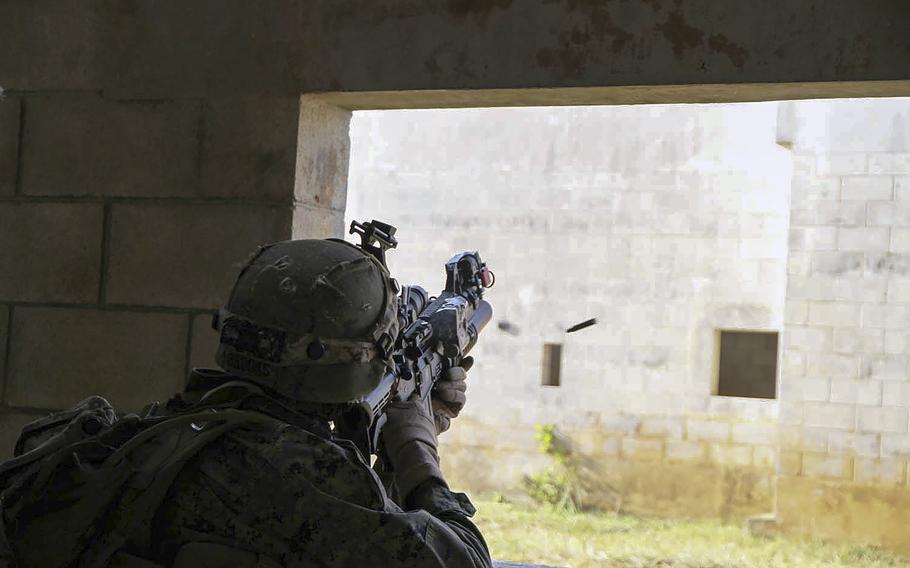 A round spins in the air after being fired by a grunt from 1st Platoon, Charlie Company, 1st Battalion, 2nd Marine Regiment Oct. 29, 2015, during Blue Chromite 16 at Combat Town in Okinawa, Japan. Marines were outfitted with the Multiple Integrated Laser Engagement System and blanks for rounds. MILES gear, similar to laser tag, emits a loud ringing sound when the person wearing it is hit. (Matthew M. Burke/Stars and Stripes) 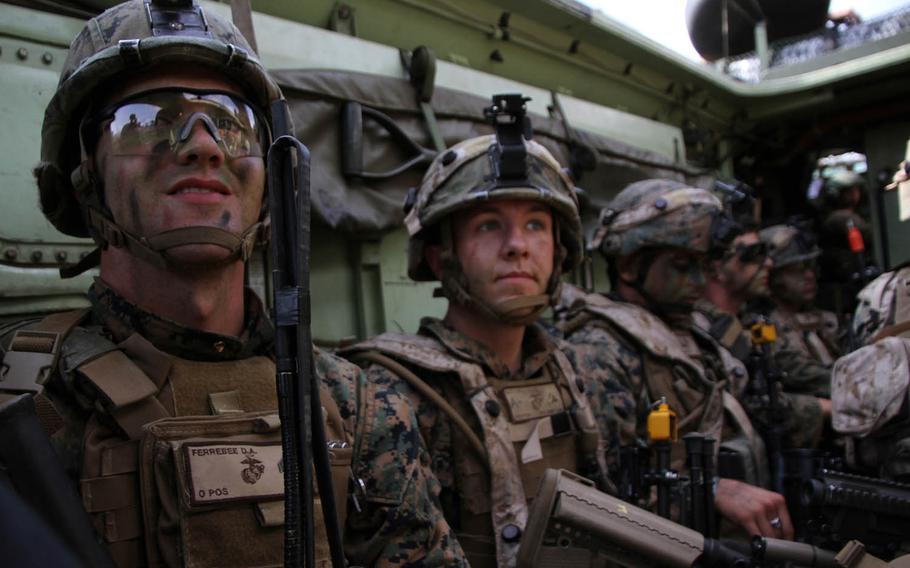 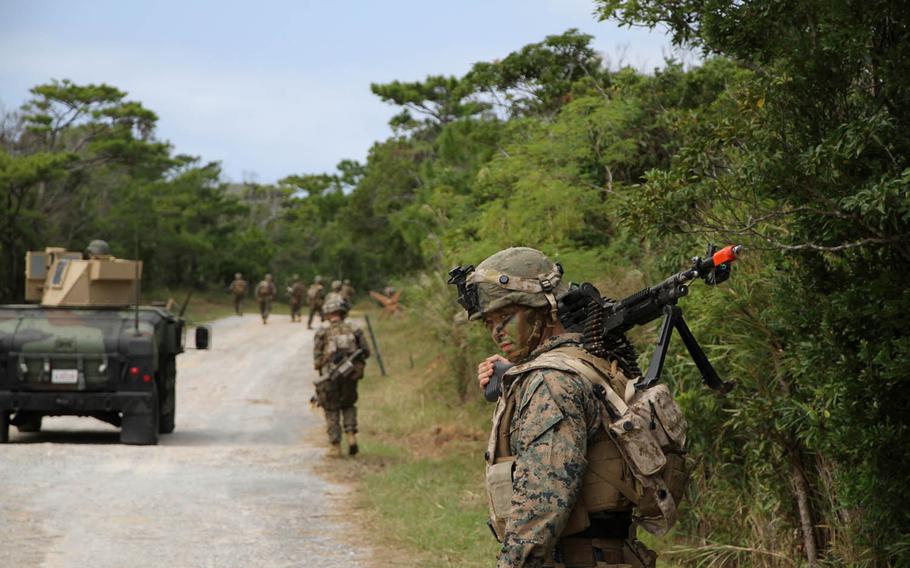 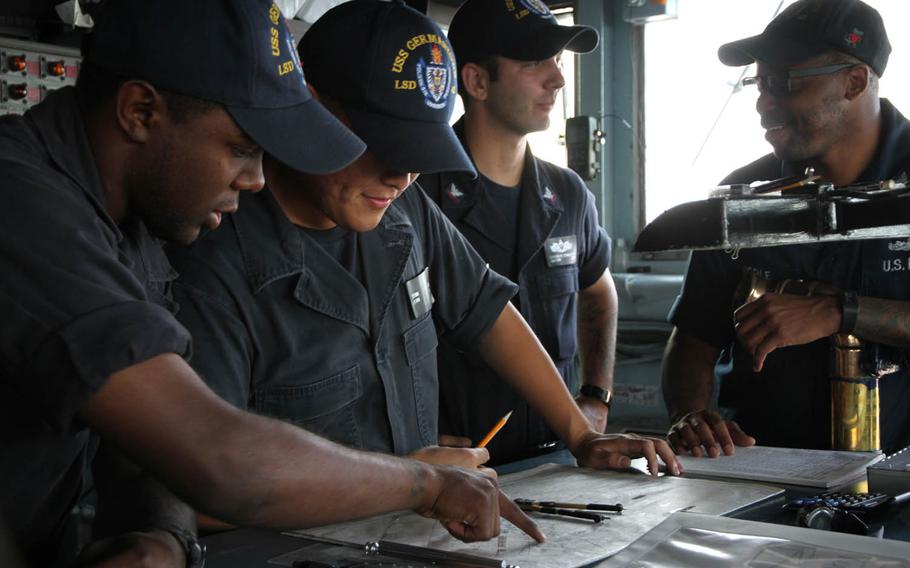 Sailors on the bridge of the USS Germantown, an amphibious dock landing ship, plot their course last week during exercise Blue Chromite 16 near Okinawa, Japan. (Matthew M. Burke/Stars and Stripes) 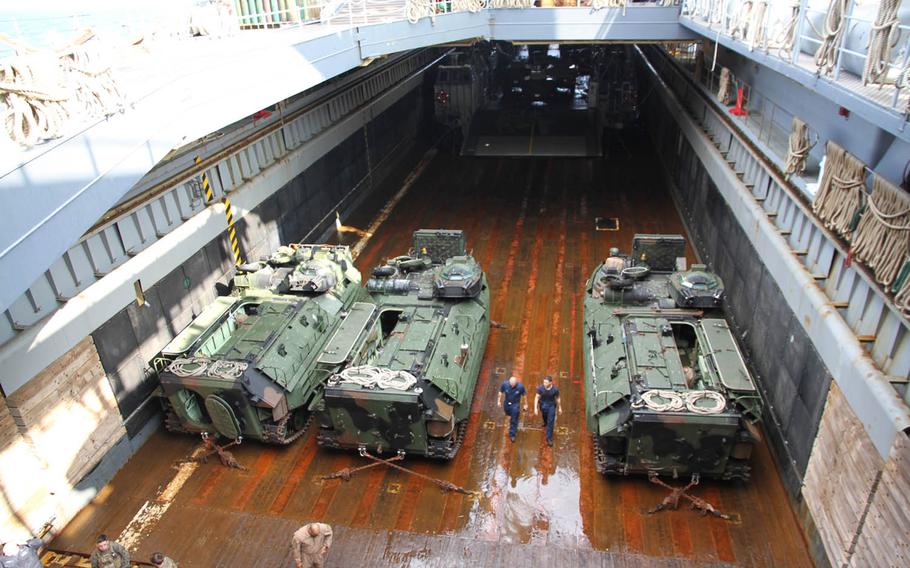 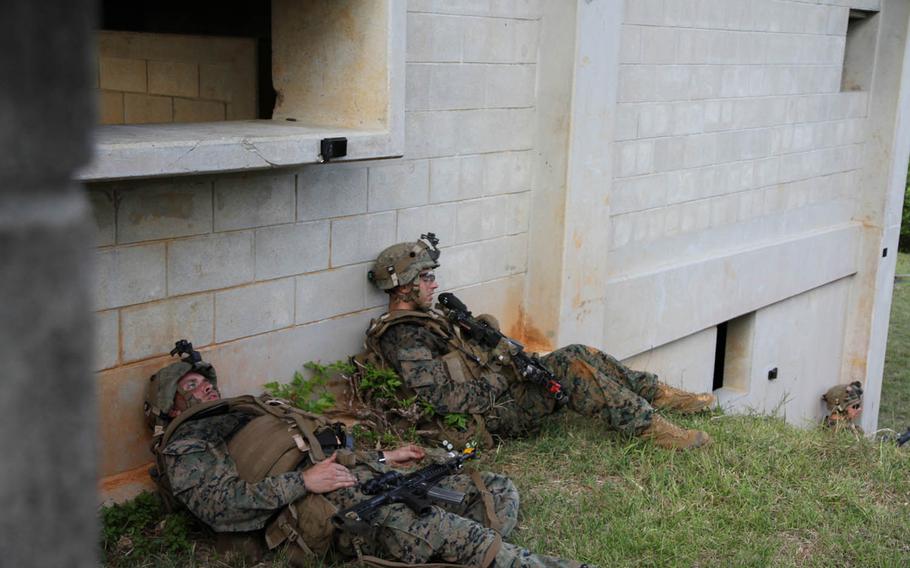 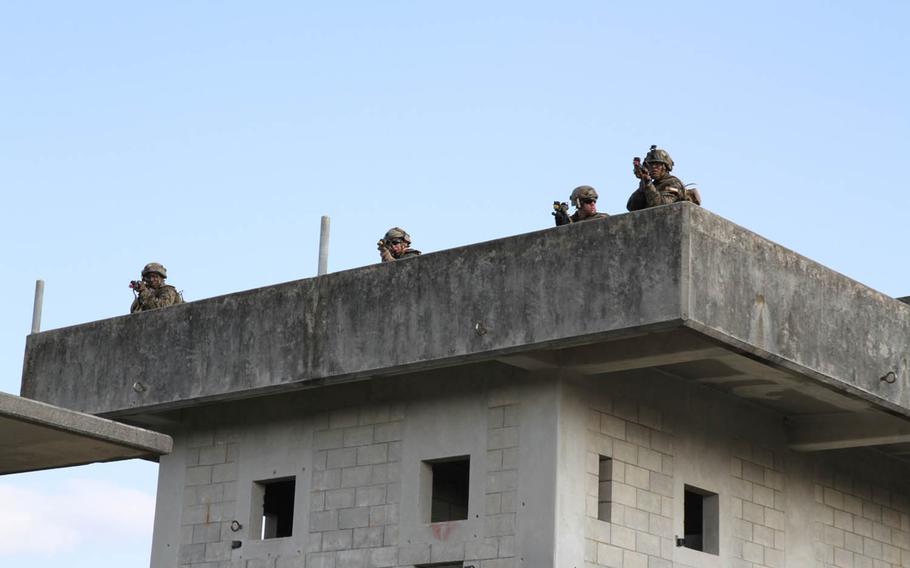 CAMP FOSTER, Okinawa — As the dawn sun teased the horizon, Marines slathered camouflage paint across their faces and loaded magazines in the USS Germantown’s well deck. Their Navy counterparts bustled about in preparation for launch from the amphibious landing ship.

Inside one of the tank-like AAVs, 19 combat-loaded Marines found themselves packed like sardines, literally on top of one another.

Expletives rained down on him from all corners of the craft.

Seasoned and boot Marines -- a term for a Marine who has never deployed -- would later admit having butterflies as the vehicle teetered on the edge of the well deck, like a roller coaster at the pinnacle of a steep ascent. Moments later, the vehicles splashed down into the crisp, royal-blue sea off the Okinawan coast, en route to assault an inland “town” held by a reinforced company.

With that, Blue Chromite 16 was underway.

The exercise, which began three years ago to coincide with renewed rotational deployments to the Pacific, is designed to deliver interoperability training to stateside infantry units. The military saves money by using units, such as the Germantown, already standing watch in the region, without sacrificing readiness for crisis situations that might arise in the Pacific.

“When 1-2 came to Okinawa, they had not been on a ship,” said Marine Lt. Col. Justin Anderson, operations officer for the 4th Marine Regiment and Blue Chromite. “3rd Marine Division and 4th Marine Regiment got them on a ship to get them qualified as amphibiously capable.

“Being amphibiously capable allows a mission commander to have versatility as he is going through crisis action planning for who he can get on what platforms to execute the mission … Blue Chromite provides an excellent opportunity for the young Marines to become familiar with the numerous elements out there that support them in the fight.”

The Lejeune Marines embarked on the Germantown on Oct. 27 from the White Beach naval facility. Life on the open sea was slow, and there was a lot of downtime for the lower ranks, who passed the time playing football and hacky sack in the well deck and preparing for their amphibious landing. The command’s upper echelons held planning meetings.

For Cmdr. Gary Harrington, Germantown’s skipper, that planning is critical: deciding which equipment is going ashore, where it needs to be and when, which personnel is going, and the deployment and return of landing craft and helicopters.

Marine officials said just being around their Navy counterparts, even for such a short period, was beneficial.

“For the few days that the young Marines were able to get on the Germantown, it drove home lifelong lessons that they will take with them,” Anderson said. “Running through the drills and rehearsals, the hallway procedures aboard ship, the integrated planning that needs to happen at all levels between the Navy and Marine Corps team does nothing but strengthen our bond between each other.”

The nine AAVs hit the shore and moved inland. The plan was to approach Combat Town from the east while Ospreys dropped off more forces to approach from the west. The Marines were tasked with clearing Combat Town and neighboring Sniper Town of enemy troops, securing the towns and holding them overnight.

They were outfitted with the Multiple Integrated Laser Engagement System — or MILES — and blanks for rounds. MILES gear, similar to laser tag, emits a loud ringing sound when a Marine is hit.

As Charlie Company met at a predetermined rally point a few kilometers from its objective, the Marines ran into their first challenge: spotty communications. Scouts reported enemy movements just down the road, and the Marines had no idea what awaited them.

First Platoon pushed out from Landing Zone Owl. The first units on the road made enemy contact immediately so the Marines would take the fight to them and make the assault on foot to avoid rocket-propelled grenades and high explosives from claiming vehicles with Marines inside.

Cpl. Daniel Ferrebee and Cpl. Jacob Harris cautiously led their squads up and down jungle roads and hills, making sure the Marines kept the proper spacing to avoid mass casualties.

“Dispersion. Keep your dispersion,” Ferrebee said repeatedly just above a whisper as he signaled to each man down the line. Shots rang out from the dense jungle.

It was an ambush.

A Marine carrying the M240 machine gun faltered. Pvt. 1st Class Charles Hopson raced forward and grabbed the weapon. Seconds later, he was on his stomach, lacing the woods with heavy fire. Two enemies were killed.

Ambushes continued for several kilometers until the Marines reached Combat Town. Just outside, they ran into fortifications and obstacles set up by heavily entrenched defenders armed with a bevy of grenades, rifles, rocket-propelled grenades and machine guns.

The Marines went on a flanking run through the dense jungle to get to them without taking fire, and called up engineers to dismantle the obstacles.

A claymore exploded with a boom, and MILES gear rang out loudly.

“You, you, you, you,” a Marine officiating officer said, pointing as he approached, indicating who had “died.” They were dragged and carried over shoulders to the rear, where they were loaded into vehicles and evacuated. A trip wire the engineers missed then claimed a machine gunner.

The Marines appeared stuck after the logjam of casualties. That’s when 1st Platoon’s leadership took control.

Harris rallied his men and charged the town, which consisted of a handful of concrete buildings and a maze of compound walls. They climbed into the first building through an open first-floor window. Deafening machine gun fire echoed within the walls.

“Cover me!” a Marine shouted as he moved.

Marines fell here and there as they continued to push through the compounds.

“Gaining a foothold in the compound under enemy fire is a pretty big deal,” Harris said later. “I thought we moved compound to compound rather quickly. The individual-based tactics were spot on, so everybody was up to par for the attack.”

Many squad members were getting their first experience with close-quarters combat, he said, and they performed admirably.

When several Charlie Company Marines walked into a basement room, a defender ran up and tossed a grenade in from the outside. All were killed.

The Marines took fire through a window from the next building. One fell. Then another.

“Marines, especially grunts, like to affectionately refer to it as controlled chaos,” Lance Cpl. William Scruggs said. “There’s 100 things happening at once, and you have to be able to — on the fly — pick up someone’s position or pick up someone’s weapon or whatever you have to do. You have to be able to pick up their position of authority … It’s pretty seamless on our part, but that’s something we train every single day for.”

When the smoke cleared, the towns had been secured. 2nd Lt. William Vivian was happy with the platoon’s performance, despite taking more than 20 casualties. 1st Platoon inflicted heavy damage, killing about 50 enemies.

“The defense put upon us was a pretty nasty set up,” he said. “I was happy with the outcome. I liked the aggression that we had.”

To wrap up Blue Chromite on Oct. 31, a fleet of Osprey tiltrotor aircraft took off like helicopters from Marine Corps Air Station Futenma. Looking much like a flock of prehistoric beasts, they seamlessly switched into airplane mode and sped off with stomach-churning speed.

For tactical pause, the fleet landed at a rally point off the coast before taking off for Camp Schwab, where they took on a group of combat-loaded Marines — up to 24 in each bird.

The Ospreys buzzed up to the Jungle Warfare Training Center at Camp Gonsalves, where the grunts unloaded into the jungle, before making a run to Schwab and back with another full load.

In all, the birds transported about 400 Marines during the exercise, said Osprey crew chief Cpl. Jonathan Ruiz, a Flying Tiger from Marine Medium Tiltrotor Squadron 262.

“[Blue Chromite] definitely has benefits for both ground side and ourselves here,” he said. “We get a lot of training for the pilots and the newer crew chiefs coming up.

“They get to interact with some of the grunts, get them on board, see what the on-and-off drills are kind of like, load up cargo. That way if one day they do deploy, they have that experience — and it’s also sort of a show of force for us in Japan, showing them that when it comes down to it, we can protect our country and their own.”