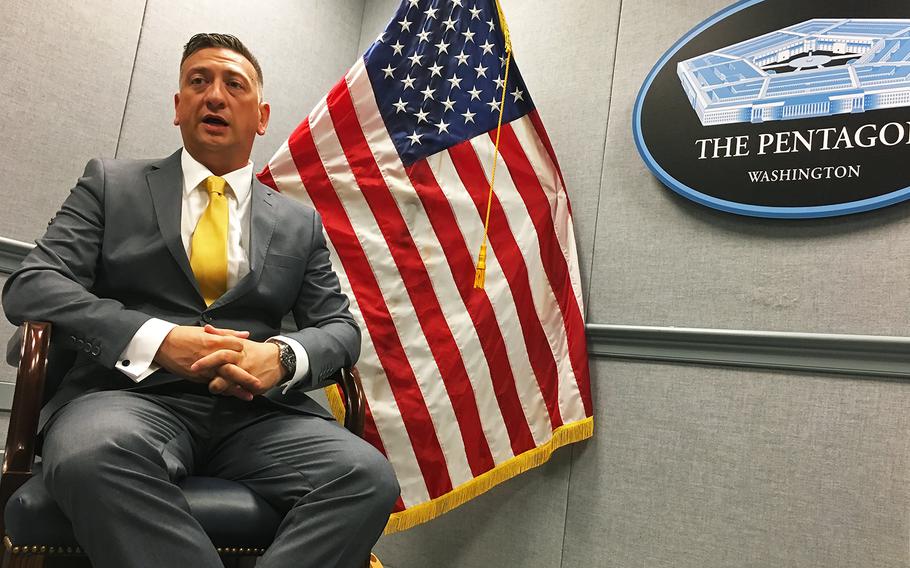 Former Army Staff Sgt. David Bellavia speaks to Stars and Stripes at the Pentagon on Monday, June 24, 2019 one day before he was to receive the Medal of Honor for his actions Nov. 10, 2004 in Fallujah, Iraq. He will become the first living recipient of the nation's highest military honor for actions in Iraq, nearly 15 years after fighting in the second battle of Fallujah. (Corey Dickstein/Stars and Stripes)

WASHINGTON — David Bellavia, who will receive the Medal of Honor on Tuesday for heroism in battle 15 years earlier in Iraq, has spent his post-Army years hosting a conservative radio talk show and running for Congress as a Republican from western New York.

For Bellavia, receiving the nation’s highest military honor will mean a career change, at least temporarily, and it will likely mean setting any political ambitions aside in the near future, he told Stars and Stripes on Monday. Bellavia, 43, will receive the Medal of Honor from President Donald Trump at the White House, an upgrade of the Silver Star that he was initially presented for actions Nov. 10, 2004 in the second battle of Fallujah.

He will become the first living Medal of Honor recipient for actions during the Iraq War, only the sixth overall recipient of the honor from Iraq, and the eighth to receive the military’s highest honor from Trump – all of which have been upgrades of previous valor awards.

On his afternoon radio show on Buffalo’s WBEN, which he has co-hosted with Tom Bauerle since 2016, Bellavia has pointedly delivered Republican talking points and traditionally conservative opinions. In recent months, he has often supported Trump’s initiatives and decisions.

He has spoken out against the Robert Mueller-led investigation into Russian election meddling and voiced support for the Trump announced ban on transgender men and women serving in the military, for example.

A Pentagon spokesman said Tuesday that the upgrade of Bellavia’s award to the Medal of Honor was strictly a product of a 2016 Defense Department-ordered review of post-9/11 valor awards.

His commanders -- Maj. Joaquin Meno, then a first lieutenant, and Col. Douglas Walter, then a captain -- submitted Bellavia for the Medal of Honor within weeks of his actions.

In 2012, Bellavia ran for New York’s 27th Congressional District on a traditionally conservative platform, according to local media in Buffalo. The seat was ultimately won by Rep. Chris Collins, who last year was charged with insider trading but won election to a fourth term in the November by a slim margin.

Bellavia flirted with a run for that seat in 2018 before ultimately deciding against it, according to the Buffalo News. Local reporters had written in recent months that Bellavia was considered a likely candidate for that seat in 2020.

While Bellavia, who left the military in 2005, did not rule out a future run for office, he said Monday that he intends to dedicate his time for now to the Army – working to help the service recruit young men and women. And that means adopting an apolitical tone, he said.

“When you look at a dog tag, there’s basic information that you put on there, and political party isn’t part of it,” Bellavia said, adding servicemembers put any political differences aside and put their mission first.

The Medal of Honor, he said, does not suddenly make a candidate qualified for office, and should not be a factor that the electorate considers.

He pointed out late Hawaii Sen. Daniel Inouye, who received the Medal of Honor for actions during World War II served in the Senate as a Democrat from 1963 until his death in 2012.

“This was a man who had a distinct reason for why he wanted to represent people in Hawaii, and he happened to be a Medal of Honor recipient,” Bellavia said. “I have great respect for that. If I feel compelled to do something, I’m going to do it. At this moment, I feel compelled to help the Army put as many people in the Army as I possibly can. That is what I would like to do until they don’t want me anymore.”