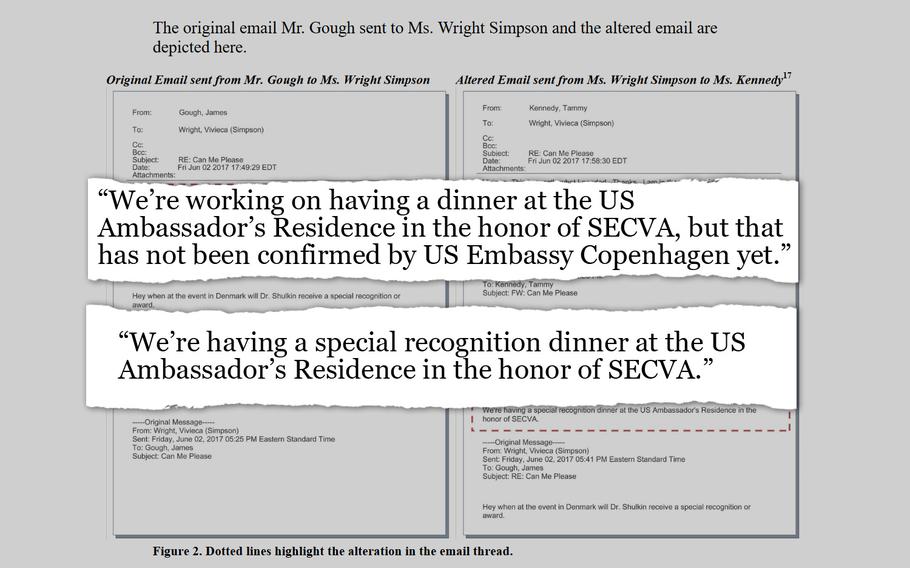 This pullout from the Department of Veterans Affairs Office of Inspector General investigation documents into Veterans Affairs Secretary David Shulkin's travel to Europe shows an email between VA Chief of Staff Vivieca Wright Simpson and program specialist James Gough. On top, the quote from the original email between the two, below is an altered version of the email. (Stars and Stripes)

WASHINGTON — The top Democrat on the House Committee on Veterans’ Affairs appealed to Attorney General Jeff Sessions on Thursday to initiate a review of claims by Department of Veterans Affairs Secretary David Shulkin that his chief of staff’s email had been hacked.

Rep. Tim Walz, D-Minn., said the allegations were “very serious” and merited a review by the Justice Department into whether fraud, computer intrusion or other cyber crimes had been committed.

Earlier Thursday, Shulkin spoke with reporters after testifying to the House committee. He said somebody had “taken over” the email account of VA Chief of Staff Vivieca Wright Simpson.

“We have found that somebody has taken over the chief of staff’s email and is sending emails like it’s her,” Shulkin said. “That’s concerning to us. We need to look into it.”

Walz’s letter to the Justice Department states that there is alleged evidence of a “spoof” account mimicking Wright Simpson’s official account.

“Emails from this ‘spoof’ account were allegedly sent to personnel within the agency,” Walz’s letter reads.

This all comes the day after VA Inspector General Michael Missal released a report that outlines “serious derelictions” by VA personnel and found Wright Simpson altered an email and made false statements that led to travel expenses for Shulkin’s wife to be paid with taxpayer dollars.

The report centered on an official, 10-day trip Shulkin, his wife and a small staff took to Europe last summer, which included full days of leisure activities and cost taxpayers at least $122,000.

Shulkin told lawmakers Thursday he had already written a check to the U.S. Treasury to pay pack $4,312 – the amount improperly paid for his wife’s travel expenses.

In the report, investigators explained that VA ethics officials initially declined to have the agency pay for travel expenses for Shulkin’s wife, Dr. Merle Bari. Wright Simpson got involved and changed an email to an ethics official that made it appear Shulkin would receive an award in Denmark, when in fact he did not, the report states. Under ethical rules, the government can pay for a federal employee’s spouse to travel for an awards ceremony.

The email Wright Simpson changed was from another VA employee. It stated, “We’re working on having a dinner at the US Ambassador’s Residence in honor of SECVA, but that has not been confirmed by US Embassy Copenhagen yet.”

The report states that Wright Simpson altered the employee’s words to, “We’re having a special recognition dinner at the US Ambassador’s Residence in the honor of SECVA.” She sent the letter to an ethics official, who then approved Bari’s travel expense.

In her first interview with investigators, Wright Simpson said she didn’t recall whether she had changed the email, the report states. In the second, she gave evasive and nonresponsive answers.

Investigators found no evidence Shulkin was aware of the falsification. His lawyers wrote that he had nothing to do with the process and was prepared to pay for Bari’s travel when he was told by his staff that the expenses could be reimbursed.

Investigators referred their findings about Wright Simpson to the Department of Justice, which declined prosecute, though the actions might have violated criminal statutes, the report states.

Walz’s letter asks the Justice Department to determine whether crimes had been committed against senior-level VA officials or on VA computers.

“These allegations from the VA Secretary that the third senior-most official at VA may have been the target of criminals committing fraud and computer intrusion with the intention of harming her reputation, and that these criminal activities took place on VA computers and networks are very serious,” he said.