Congress pushes to allow troops to be armed on military bases 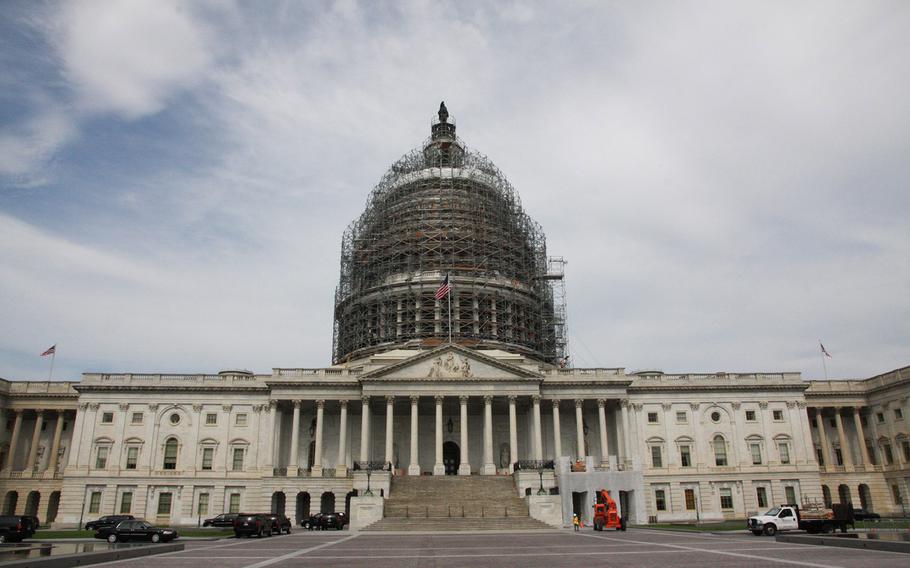 • Should gun restrictions on military bases be eased? Take our informal poll and add your thoughts.

WASHINGTON – Congressional leaders said Friday they will direct the Pentagon to allow troops to carry guns on base for personal protection following a deadly shooting rampage in Tennessee that killed four Marines and seriously wounded a sailor at a recruiting center.

The directive will be included in the National Defense Authorization Act, which sets defense policy for the coming year and may be finalized by the House and Senate this month, according to a joint statement from Sen. John McCain, R-Ariz., and Rep. Mac Thornberry, R-Texas, who are heading negotiations over the bill.

Gun proponents have been calling for the Defense Department to lift its current policy, which allows only security and law enforcement to carry loaded guns on military facilities outside of war zones, since Army Maj. Nidal Malik Hasan killed 13 people and wounded more than 30 in a shooting spree at Fort Hood, Texas, in 2009.

“Long before the Chattanooga attack, we had been working to clarify a post commander’s authority to allow carrying of personal firearms,” the statement from McCain and Thornberry said. “This year’s National Defense Authorization Act will reflect that work. Together, we will direct the Pentagon to end the disconnect between the threats our warfighters and their families face and the tools they have to defend themselves.”

But Gen. Ray Odierno, the Army chief of staff, warned Friday about “over-arming” personnel. He said that security at recruiting centers will be reviewed but that it was too early to say whether the service will boost protection, according to The Associated Press.

DOD spokesman Mark Wright said commanders already have some flexibility to arm troops if they see a security need.

The current department policy says that arming personnel would be “limited and controlled” to avoid accidents or misuse, and the arming of any servicemembers outside of security and law enforcement “shall be limited to missions or threats.” The policy was first issued in 1992 by Donald Atwood, the deputy secretary of defense under President George H.W. Bush and Defense Secretary Dick Cheney.

The Chattanooga shooting Thursday by Mohammad Youssef Abdulazeez, a 24-year-old electrical engineer from the city, was at least the seventh such deadly incident involving servicemembers since Fort Hood and was being investigated by the FBI as a possible act of domestic terrorism.

Abdulazeez drove his Mustang up to the Navy and Marine Corps Reserve Center in Chattanooga and began firing on the military facility, killing and wounding personnel. Witnesses said local police responded to the incident and the gun battle lasted about 20 minutes.

The shooter, who was killed by authorities, had also fired into a strip mall recruiting office earlier in the day.

McCain and Thornberry did not immediately release details of the legislation. A measure in the massive NDAA bill passed by the House in May would give local commanders the final say on whether troops could carry concealed weapons on military facilities for personal protection.

Congressional staff said lawmakers will work to improve the proposal.

The measure was a victory for House Republicans who support gun rights but it struggled to draw needed support from the other chamber of Congress before the Chattanooga shooting, said Rep. Louie Gohmert, R-Texas, who sponsored similar legislation last year.

“I think the least we can do is not have these four Marines die for nothing. At least let’s move forward,” he said.

Any final NDAA issued by the McCain and Thornberry conference committee must be approved by the full House and Senate but cannot be amended, according to congressional staff.

The announcement was part of a flurry of activity on Capitol Hill on Friday. Rep. Duncan Hunter, R-Calif., who served in the Marine Corps, said his staff was drafting legislation that would allow military officers in charge of recruiting centers to carry firearms or provide for armed security.

“If you go on any base, you have armed security there. ... Recruiting centers in a strip mall, they have no defense against people who just hate America and hate our military,” he said.

Many states that are home to military bases allow citizens to carry firearms outside the fence line, raising concerns that troops could be left defenseless. Tennessee requires that only handguns be registered, and the state recently voted to allow residents to carry weapons in public parks, according to the National Rifle Association.

The issue of guns on military bases entered the 2016 presidential race in April when Cruz said he supports the Senate legislation allowing troops to be armed.

Trump followed suit this week and on Friday said the change could have made a difference for the victims in Tennessee.

“Get rid of gun free zones. The four great Marines who were just shot never had a chance,” Trump wrote on Twitter. “They were highly trained but helpless without guns.”