Congress must be consulted before any military intervention in Venezuela, Sen. Reed contends 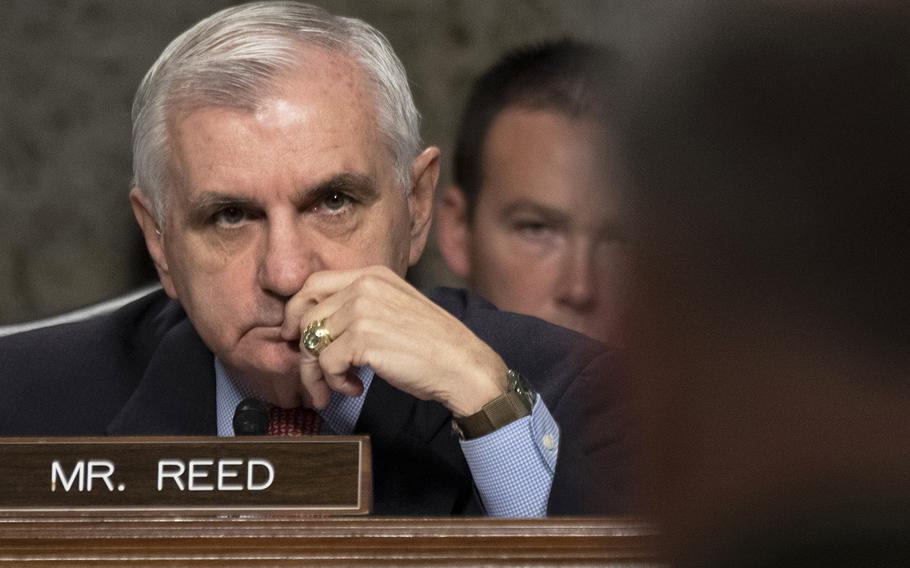 WASHINGTON — The top Democrat on the Senate Armed Services Committee warned Thursday that Congress must play a part in making any decisions that could lead to a U.S.-led military intervention to oust Venezuela’s embattled dictator, Nicolas Maduro.

“Congress must be consulted if there is any military action beyond the current planning for the evacuation of U.S. citizens and embassy personnel,” Sen. Jack Reed, R.I., said during a hearing on U.S. military efforts in South America and Africa. “I know the events on the ground are changing day by day and it is impossible to tell what event or set of events will trigger Maduro’s departure.”

However, other world powers including Russia and China have backed Maduro and warned the United States against meddling in Venezuela. Russia and Cuba have even sent military assets to protect Maduro in recent weeks.

“The situation in Venezuela is dire,” Navy Adm. Craig Faller, the chief of U.S. Southern Command, said Thursday while testifying before the Senate panel alongside Marine Gen. Thomas Walhauser, the chief of U.S. Africa Command. “While Russia, Cuba and China prop up the Maduro dictatorship, the remainder of the world is united.”

Maduro has surrounded himself with a large contingent of Cuban security forces, Faller said, likening their role to that of the U.S. Secret Service.

That move, coupled with reports that Russia has sent mercenaries to back Maduro, show the dictator has little trust for his own guards, despite his retention of power over the nation’s military.

“I think it gives a good sense of where the loyalty of the Venezuelan people is – that his main security force is made up of Cubans,” Faller said.

Pentagon officials have said in recent days that they had not received orders to plan for an invasion of Venezuela. The United States for decades has retained a small force in neighboring Colombia, which a defense official described as including some 200 servicemembers.

Faller said Thursday that the U.S. military in the region was prepared to execute defensive operations if American diplomats faced violence in Venezuela. He stopped short of addressing the potential of an armed intervention or invasion led by the United States.

Faller and Reed, as well as other senators, agreed they hoped the country would be able to find a diplomatic solution to avoid any violent ousting of Maduro, who is backed by the Venezuelan military.

Faller described a bleak scene in Venezuela, where a crippled economy has led to a mass migration of the country’s citizens and widespread starvation. The admiral said the lack of food impacts the nation’s top-heavy military where most troops remain loyal to Maduro’s contingent of some 2,000 generals – more generals than the military forces of NATO countries combined.

“The rank and filed are starving just like the population,” Faller said, noting he had recently visited a U.S.-run medical camp on the Colombia-Venezuela border. “You see these kids who have lost 25, 30 pounds in a year. They were stick-thin. They’ve never had medical attention. We think that condition affects a large swath of the population, and we think that population is ready for a new leader.”