AFRICOM in the Congo 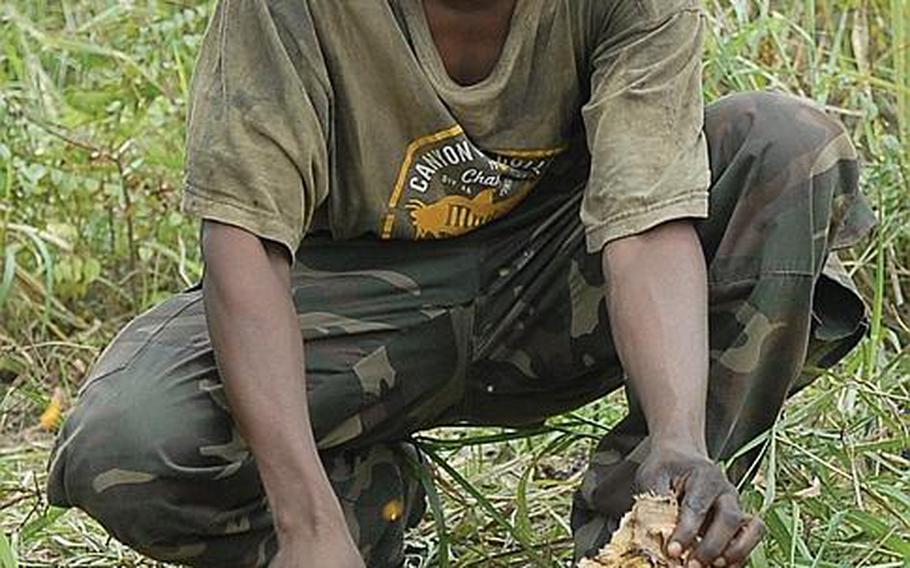 Buy Photo
In Congo, troops frequently face the challenge of not getting enough food, whether on base or in the field. As a result, soldiers have been known to steal from the population. At Camp Base in Kisangani, a hungry soldier makes do with some fresh palm oil seeds after a hard day of training. (John Vandiver/Stars and Stripes)

Buy Photo
In Congo, troops frequently face the challenge of not getting enough food, whether on base or in the field. As a result, soldiers have been known to steal from the population. At Camp Base in Kisangani, a hungry soldier makes do with some fresh palm oil seeds after a hard day of training. (John Vandiver/Stars and Stripes) 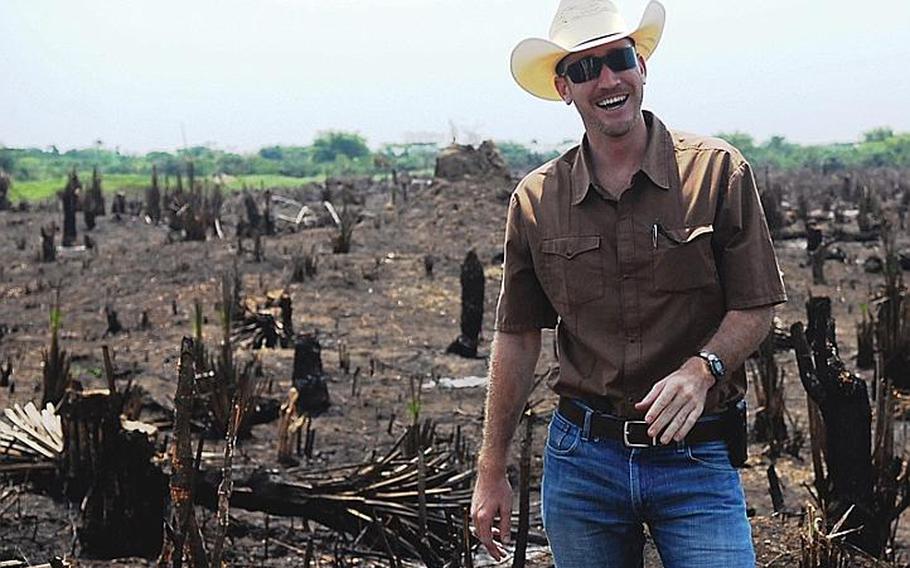 Buy Photo
Agricultural specialist Beau Davis has been leading a U.S. Africa Command- and State Department-sponsored program in Kisangani that aims to make the training camp a self-sustaining food producer. Crops and livestock are raised on the base, though the effort still has a long way to go toward providing enough food for soldiers there. Workers at the camp recently cleared several acres of jungle bush, where more crops will be planted. (John Vandiver/ Stars and Stripes) 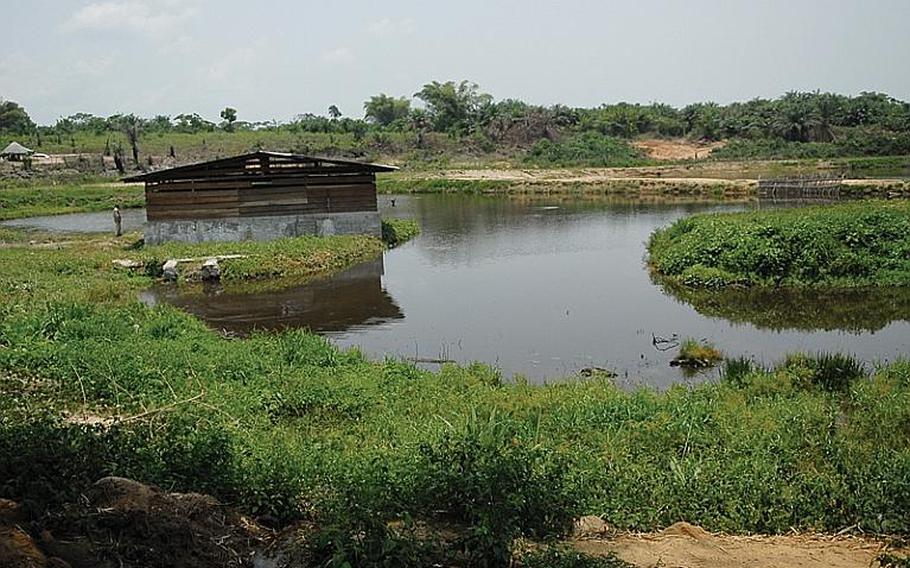 Buy Photo
Man-made ponds at Camp Base serve as fish farms. Thousands of tilapia have been put in the ponds, but there has been a problem with fish theft at the base. (John Vandiver/Stars and Stripes) 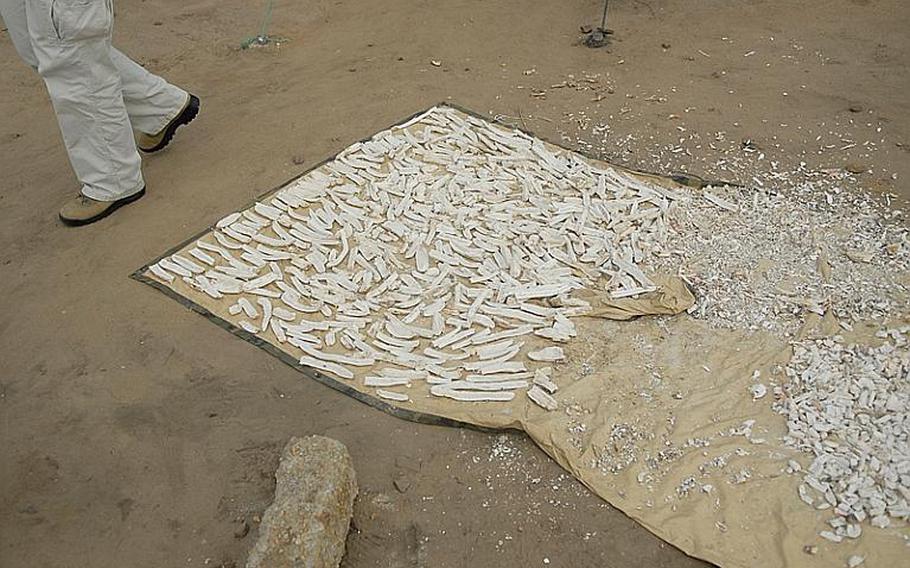 Buy Photo
Congolese soldiers, short on food, have been known to rely on sun-dried slices of cassava, which can serve as a snack after being deep-fried in oil. For troops at the base, one meal a day is the norm. (John Vandiver/Stars and Stripes)

KISANGANI, Congo - Birds of prey hovered near the man-made ponds at the military base in this jungle city, where U.S. taxpayer dollars are being spent to help the struggling Congolese army learn how to perform the most fundamental of tasks: feeding its soldiers.

Some 45,000 tilapia were supposed to be swimming in the ponds scattered around the camp, the fruits of an American effort to teach hungry soldiers how to farm their own food.

In 24 hours, the Congolese defense minister would be visiting the camp for a ceremonial fish harvest that was to be broadcast on national television.

But Beau Davis, the 28-year-old Texan in charge of the program, was concerned. Would the harvest be plentiful? How many fish, really, were still in the ponds?

"I need a shotgun," Davis joked as he scanned the sky for birds. "But it's not as big of a problem as another species of predators - with two legs."

Base workers, hungry and short on cash, have been known to fish the ponds and sell their catch at village markets.

For the past year, Davis has been working with a cadre of Congolese soldiers to raise cattle, pigs and fish. The team also is growing maize, cassava and other crops as part of a pilot project that could be replicated at bases across the Democratic Republic of the Congo.

Generations of military forces here have been living off the land in a different way. Without a reliable supply chain, troops in the Congo have found it easier to prey upon civilians, stealing food and whatever else they need, rather than work their own fields.

Now, as the U.S. attempts to transform this unruly army into a more professional force, military officials say the key could be something as basic as ensuring that troops have regular meals. Without such necessities, there is little hope that soldiers will cease to plunder the populations they are supposed to be protecting.

"To the Congolese's credit, they recognize the weakness in (their logistical) system," said a U.S. military official, speaking on background about the military mission in Congo. "Feeding is an example of that."

For Davis, the visit by Congolese Defense Minister Charles Mwando Simba offered a chance to showcase the progress of soldiers in Kisangani as they attempt to build a base that can supply its own food. He hoped to be able to pull out baskets teeming with tilapia.

Davis, a contractor from the Norman Borlaug Institute for International Agriculture at Texas A&M, manages a $1.9 million program funded by U.S. Africa Command and the U.S. State Department. The idea is to develop a sustainable source of food for the military mission at the camp while testing whether such an initiative can be replicated in other regions.

A company of 60 Congolese soldiers were converted into agricultural specialists capable of managing a diverse blend of crops and livestock. Jungle bush was plowed into farmland and local agricultural consultants from a nearby university were brought in to lend their expertise.

"That's for the long-term sustainability, because we aren't going to be here forever," Davis said.

"If we could see this done across the nation, not only will it help in feeding the military, it could change the view of the army - that they're not just people who take and take and take," Davis said. "There is not a base commander in Congo that doesn't want a productive farm on their base."

But in Kisangani, there are signs of trouble as short-term needs get in the way of the long-term interests.

Fish, pigs, cattle and crops being cultivated have become potential targets for famished troops. There's been at least one casualty: a young calf was found bloodied after being hacked with a machete. Hungry soldiers, who only get one meal a day at the base, were suspected.

Before the arrival of the VIPs, Davis pulled a night shift, trying to discover just how many fish were under the water's surface.

During meetings in the capital city of Kinshasa, Davis had heard plenty of lip service from government officials about how they were interested in building a military that is self-sustaining.

But over time, Davis said he saw leaders take a genuine interest in the agricultural initiative and Mwando, the defense minister, had become one of the program's strongest advocates.

"It remains to be seen what the (Congolese military) will do on its own," Davis said. "Everybody likes the idea when the U.S. is paying."

After all, it was American taxpayers who paid for the tilapia farms. The fast-growing fish species could introduce some much-needed protein into the diets of the soldiers on base.

But would there be enough fish to feed an army?

Not, it turned out, on the day of Mwando's visit. After a desperate night of fishing, Davis knew he needed to improvise the next morning. If the ceremonial harvest went forward as planned, Mwando would likely be pulling fishless nets from the water before the rolling cameras.

So instead, Davis laid out his meager catch from the night before in an anticlimactic demonstration of the farm's yet to be realized potential. The cameras clicked. The fish were fried for lunch. And Davis pondered a new strategy for a better harvest the next go-around. Security would be part of that plan, he said.

"As far as the actual fish we harvested, I was very disappointed," Davis said shortly after the defense minister's visit. "We had a lot more theft than we realized."