Commanders have a lot to learn fast on transgender issue 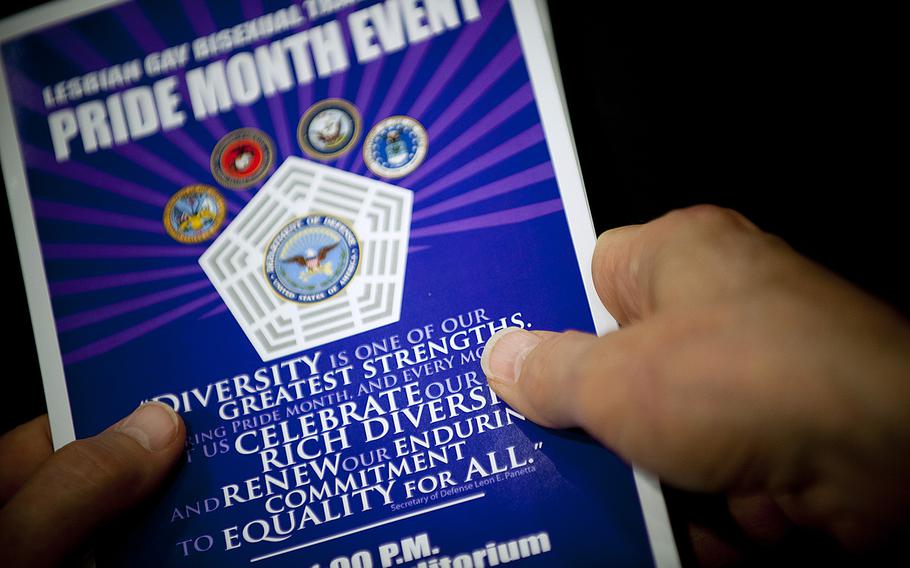 Many military commanders might have been surprised June 30 when Defense Secretary Ash Carter announced that, effective immediately, transgender servicemembers could be open about their preferred gender without fear of involuntary dismissal or denial of enlistment or continued service “just for being transgender,” as Carter explained it.

He went farther than that, however, pleasing up to 11,000 transgender personnel estimated to be serving on active duty or in reserve components, but alarming some line commanders still puzzled by medical issues alone associated with servicemembers desiring to switch genders.

Carter gave his department and service branches 90 days, until Sept. 1, to write and issue commander guidebooks on handling of issues raised by the new transgender policy. Also by Sept. 1, the military medical community is to be given guidance to begin providing transgender personnel with whatever medical care they require, from counseling to hormone treatments and, for some members, gender reassignment surgery.

On open recruitment of transgender personnel, Carter said it should be allowed no later than July next year. The military no longer classifies gender nonconformity as a mental illness. But transgender recruits who otherwise qualify for service will need statements from their doctors certifying that they have been “stable” in their new gender identity at least 18 months.

There is policy flexibility, however, for recruits who don’t declare or are unsure of their desire to change genders as they enter service. Those who complete 180 days’ honorable service before deciding they want to change genders still will be provided with whatever transition care they need.

Transgender experts and advocates expressed confidence that the U.S. military, like armed forces of 18 other nations, will adapt swiftly to open service of transgender members and shifting gender identities. They predict little disruption to unit operations and no significant increase in overall medical costs given that the transgender population is so small.

But advocates and experts also acknowledged the steep learning curve ahead for leaders at all levels to understand transgender members, the stages of transition ahead for them, and the fact that level of medical treatment will vary significantly based on individual needs.

“One person’s transition doesn’t look like the next person’s,” said Dr. Jesse M. Ehrenfeld, associate professor of anesthesiology and surgery at Vanderbilt University School of Medicine. That’s hard for private-sector employers to understand and will be more difficult for the military, he said.

“There’s an expected course when somebody has their gall bladder out. I can tell you as a physician what their recovery time is expected to be, when we think they’ll be deployable again. I can’t necessarily tell you that for a transgender person because transition is unique and specific to any one person. … [T]hat’s one of the harder reasons why it’s been challenging for people to wrap their minds around what the impact of all this is.”

Ehrenfeld, a Navy Reserve commander, is credited with sparking Carter’s interest in the issue six days into his stint as defense chief. With press in tow, Carter held a town hall visit with troops in Kandahar, Afghanistan, where Ehrenfeld was deployed. He asked Carter his thoughts on transgender members serving in austere environments like Afghanistan.

Ehrenfeld said he was sitting beside a transgender airman who risked dismissal if his status were known. So the doctor asked a question for him. Carter said he wanted to make service attractive to all “our best people.”

Four months later, Carter barred the services from forcing out or denying re-enlistment based on gender identity unless personally approved by the undersecretary of defense for personnel, who also would chair a working group of senior defense and service staffs to study the issue. Carter told the group to presume transgender personnel can serve openly without adverse impact to readiness, unless they could identify impediments.

Ehrenfeld, who treats transgender patients and coauthored a book on LGBT clinical health, said Carter’s June 30 decision favorable for transgender members is more important than his deadlines because “the real work is just starting. There is so much education that needs to be done, about what this means, what integration looks like. … Although policies will be written, changes implemented, guidance given, I think the hard work is on changing our conversation and understanding at the command level [to] foster an environment across the services that’s inclusive and open to all.”

Sen. John McCain, R-Ariz., chairman of the Senate Armed Services Committee, promised a hearing on the new policy, focusing on the added cost for military medicine and the potential impact on readiness.

At the department’s request, think tank Rand Corp. has studied both questions and predicted no significant impact. Health coverage of gender transition would cost between $2.4 million to $8.4 million annually, a range “exceedingly small” against $6 billion spent annually on active-duty care.

Rand also estimated that less than a tenth of 1 percent of the force would have transition-related care disrupt their deployment.

Retired Rear Adm. Alan M. Steinman served as the Coast Guard’s top medical officer and later co-authored a 2014 study that found no medically sound reason to continue the ban on transgender personnel. It recommended the military provide all the medical care these members need.