Command Sgt. Maj. Grinston to be 16th sergeant major of the Army 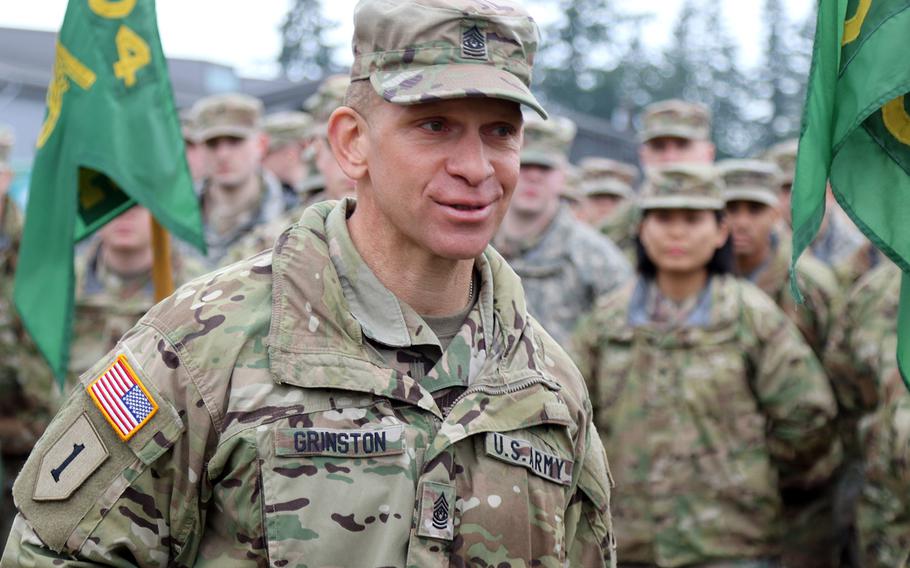 Command Sgt. Maj. Michael Grinston has been selected as the next Sergeant Major of the Army. (Adam Ross/U.S. Army)

WASHINGTON — Command Sgt. Maj. Michael Grinston, who has been in the service for more than 30 years, has been selected to be the 16th sergeant major of the Army, the service announced Tuesday.

Grinston is the senior enlisted leader for U.S. Army Forces Command at Fort Bragg, N.C., and he will be sworn in to his new role at the Pentagon on Aug. 16, according to the Army. Sgt. Maj. of the Army Daniel Dailey, who has been in his position since 2015, is retiring.

“I look forward to working with Command Sgt. Maj. Michael Grinston,” Army Secretary Mark Esper said in a prepared statement. “The Army is in the midst of a renaissance, and he is a great choice to carry on our readiness, modernization and reform efforts.”

The Army’s Chief of Staff Gen. Mark Milley called Grinston a “world class leader who stands out” among the other noncommissioned officers.

“He is the right noncommissioned officer to lead our Army into the future,” he said in a prepared statement.

In his new role, Grinston, 51, will serve as the personal adviser to the Army’s chief of staff regarding issues affecting enlisted soldiers. He will also recommend “quality-of-life improvements to Army leadership” and sit on several councils that decide on matters regarding Army families, according to the Army statement. Grinston and his wife Alexandra have two daughters.

“I am honored to have the opportunity to continue to serve the great soldiers and families of the United States Army,” Grinston said in the prepared statement.

The Jasper, Ala., native enlisted in the Army in 1987 to serve as an artilleryman, according to his official Army biography. Grinston’s deployments include Operations Iraqi Freedom and Enduring Freedom, as well as Desert Shield and Desert Storm. He was also the senior enlisted leader for the 1st Infantry Division when it supported Operation Inherent Resolve from October 2014 to June 2015, according to the Army.

Grinston earned a Bachelor of Arts in Business Administration from the University of Maryland University College, which is based in Largo, Md. His military awards include the Defense Superior Service Medal, two Legion of Merit medals and five Bronze Star medals, including two with combat ‘V’ devices. Grinston has also earned the Ranger tab, the Master Parachutist badge, the Air Assault badge, the Drill Sergeant Identification badge and the Combat Action Badge.