Clergy near tears after militants cleared from Iraqi churches 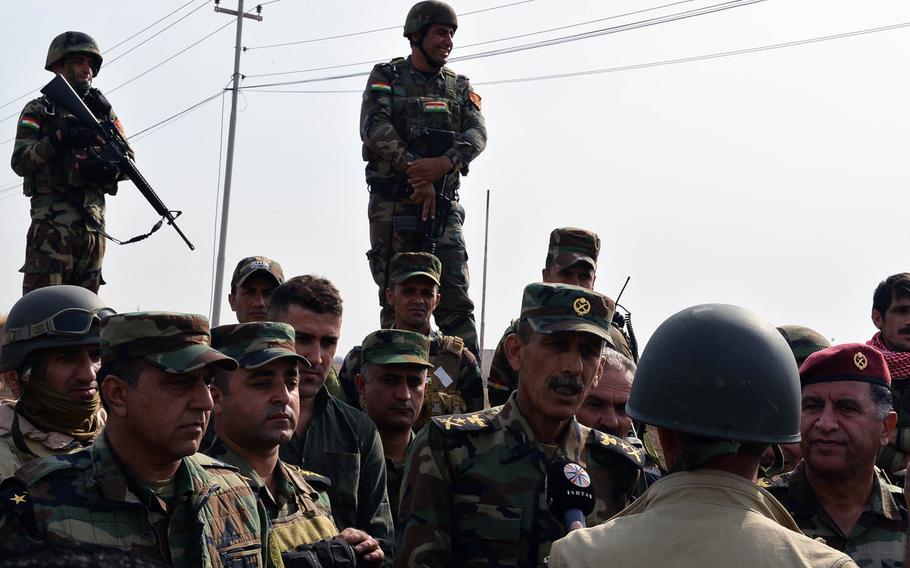 Gen. Jamal Mohammad Omer, chief of staff of the Kurdish peshmerga, briefs reporters on the outskirts of Bashiqa, Iraq, on Wednesday, Nov. 9, 2016, regarding the operation that retook the town from Islamic State militants, who had controlled it for about 2 1/2 years. (Chad Garland/Stars and Stripes)

Gen. Jamal Mohammad Omer, chief of staff of the Kurdish peshmerga, briefs reporters on the outskirts of Bashiqa, Iraq, on Wednesday, Nov. 9, 2016, regarding the operation that retook the town from Islamic State militants, who had controlled it for about 2 1/2 years. (Chad Garland/Stars and Stripes) 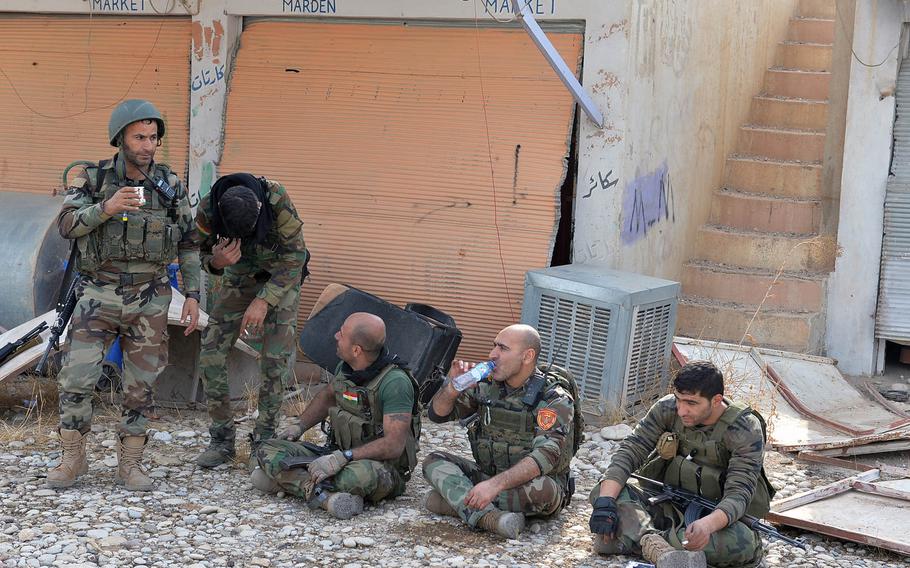 Kurdish peshmerga forces are pictured here on Wednesday, Nov. 9, 2016, as they relax outside damaged shops on the edge of Bashiqa, Iraq, a town about 13 miles from central Mosul. The fighters retook the town from Islamic State militants, who had controlled it for more than two years, as part of the offensive to liberate Mosul and surrounding areas, which began Oct. 17, 2016. (Chad Garland/Stars and Stripes) 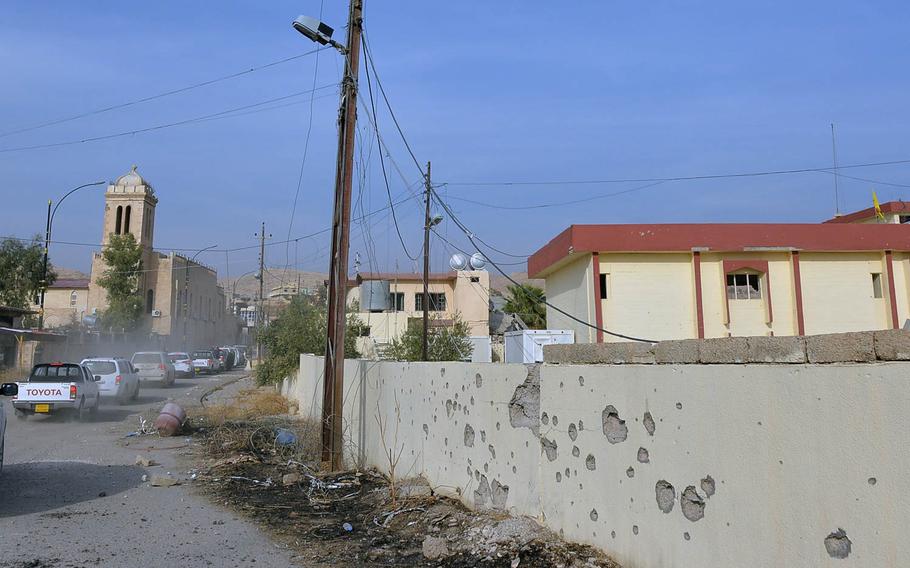 A wall not far from St. Shmoni Church in the town of Bashiqa, Iraq, is pocked with bullet holes, shown here on Wednesday, Nov. 9, 2016, shortly after Kurdish peshmerga forces retook the area from Islamic State fighters, who had controlled it for 2 1/2 years. (Chad Garland/Stars and Stripes) 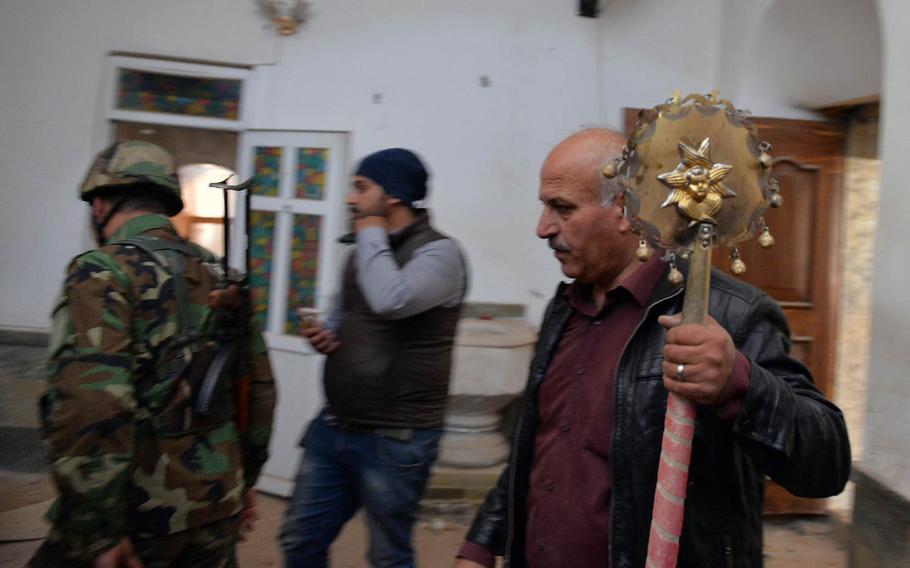 A man carries one of several religious items salvaged from the damaged St. Shmoni Syrian Orthodox Church in the Iraqi town of Bashiqa on Wednesday, Nov. 9, 2016, shortly after anti-Islamic State forces retook the area from militants who had controlled it since 2014. (Chad Garland/Stars and Stripes) 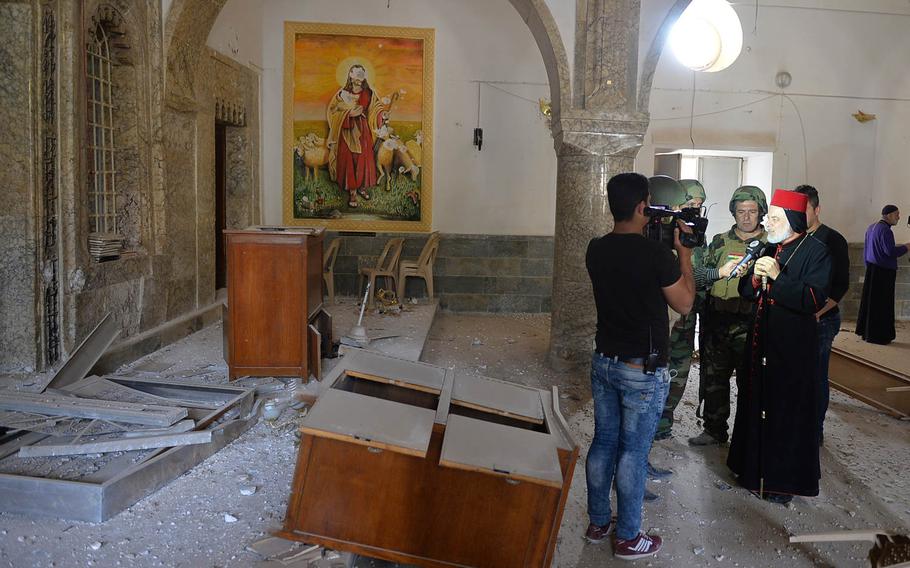 Bishop Mosa Al-Shamani of the Syrian Orthodox Church's diocese in northern Iraq, speaks to a reporter in St. Shmoni Church in Bashiqa, Iraq, on Wednesday, Nov. 9, 2016, shortly after the town was retaken from the Islamic State group that had held it for more than two years. (Chad Garland/Stars and Stripes) 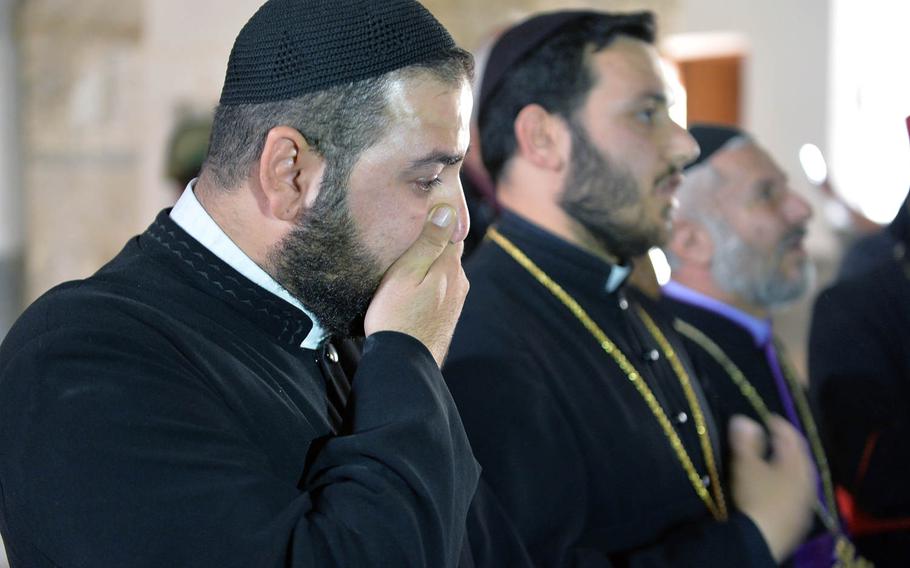 Rev. Safyan Yakub, a priest in the Syrian Orthodox Church, was shocked by the damage he witnessed at St. Shmoni Church in Bashiqa, Iraq, on Wednesday, Nov. 9, 2016. The nave and sanctuary were in disarray and covered in dirt and broken glass in the church where Yakub last said mass in 2014, shortly before fleeing when Islamic State fighters overran the town. (Chad Garland/Stars and Stripes) 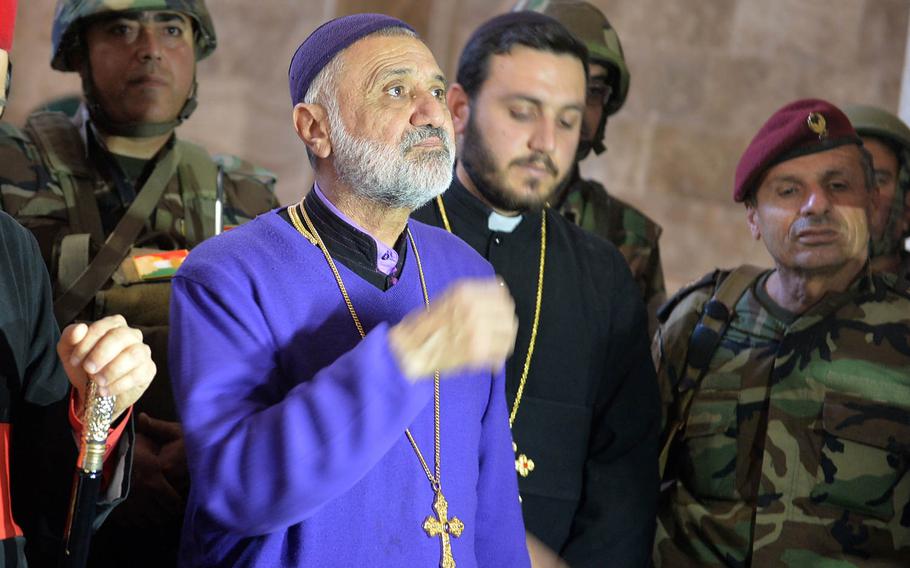 Rev. Aphrem Alkhoury Binyamen makes the sign of the cross while praying at St. George Church in Bahzani, Iraq, about 13 miles from central Mosul, on Wednesday, Nov. 9, 2016. The priest returned to the church for the first time in 2 1/2 years after fleeing the advance of the Islamic State group. (Chad Garland/Stars and Stripes)

BASHIQA, Iraq — For the first time in 2 1/2 years, a group of Syrian Orthodox Church clergy visited churches in two villages near Mosul that had only hours earlier been cleared of Islamic State fighters by Kurdish peshmerga forces.

Two days after entering the town of Bashiqa, peshmerga forces said they had it under control, but it’s not yet fully secure.

Still, they escorted the priests and their bishop to St. Shmoni Church in Bashiqa and St. George Church in neighboring Bahzani, where the clergy recited prayers in the naves. After each prayer, they rang the church bells as bomb blasts and gunfire echoed nearby.

After an early morning advance into Bashiqa on Monday, Iraqi forces battled Islamic State militants in heavy firefights throughout the next two days, Gen. Jamal Mohammad Omer, chief of staff of the peshmerga, told reporters on the edge of the town Wednesday afternoon. Peshmerga fighters, tanks, Humvees and Mine Resistant Ambush Protected armored personnel carriers lined the road.

The offensive to retake Bashiqa from Islamic State militants is part of a larger operation to rout the group from Mosul, Iraq’s second-largest city, which it has held since 2014. U.S.-backed Iraqi government and Kurdish forces are advancing on the city from several directions.

Earlier in the week, about 18 hours into the fighting in Bashiqa, Iraqi Brig. Gen. Yehia al-Zoubaydi, a military spokesman in Makhmour, a staging area for Iraqi forces, said he was happy to see the Kurds and Iraqis fighting together against the same enemy.

“That is a beautiful thing.”

Bashiqa was finally retaken about 2 a.m. Wednesday, Omer said. Of an estimated 100 militants, the peshmerga killed more than 60 and captured an undisclosed number of others, he said. A small number of militants remained in the town, including snipers, but he said they would not be a problem.

“We have a plan to clear these villages,” he said. Efforts were expected to begin Thursday to dispose of booby traps, car bombs and other explosive devices expected to be littering the buildings and rubble of Bashiqa and Bahzani.

Later in the afternoon, peshmerga fighters escorted the Syrian Orthodox clergy first to St. Shmoni, where the nave was strewn with rubble, glass and fallen chandeliers. Priests picked through the debris in the church sanctuary, salvaging vestments and sacred books from the dusty floor. Some of the men fought back tears.

“We see everything is ... destroyed,” said Rev. Aphrem Alkhoury Binyamen, one of the priests who served in the parish until militants overtook the area in 2014.

Looking over the ruins, he said the Islamic State intended to send a message: “We want to kill you, we want to destroy you.” But, he said, the Christians here “will never feel fear.”

“We are staying in this ground and we will pray in this church.”

A short distance away, through blocks of charred and flattened buildings, at St. George, a stone church on a small hill, Binyamen kissed the threshold and post at the gate.

Iraq’s Christian community, considered one of the oldest in the world, has seen a sharp decline in numbers since the U.S. invasion in 2003. At the time, there were about 1.5 million Christians in the country, but the ensuing bloody sectarian conflict forced many to flee to other Middle Eastern countries or to Europe. According to current estimates, fewer than 300,000 Christians of all denominations remain in Iraq

Peshmerga fighters led the way through a large hall at St. George, where militants had left behind camouflage coverings used by snipers. Cocking their rifles, they cleared rooms in the buildings of the church compound.

Here, as at St. Shmoni, the clergy picked through the debris for what they could salvage before reciting a prayer.

After the prayer, they and several Kurdish fighters flanking them shouted, “Long live the peshmerga.”

Allen Kakony contributed to this story.