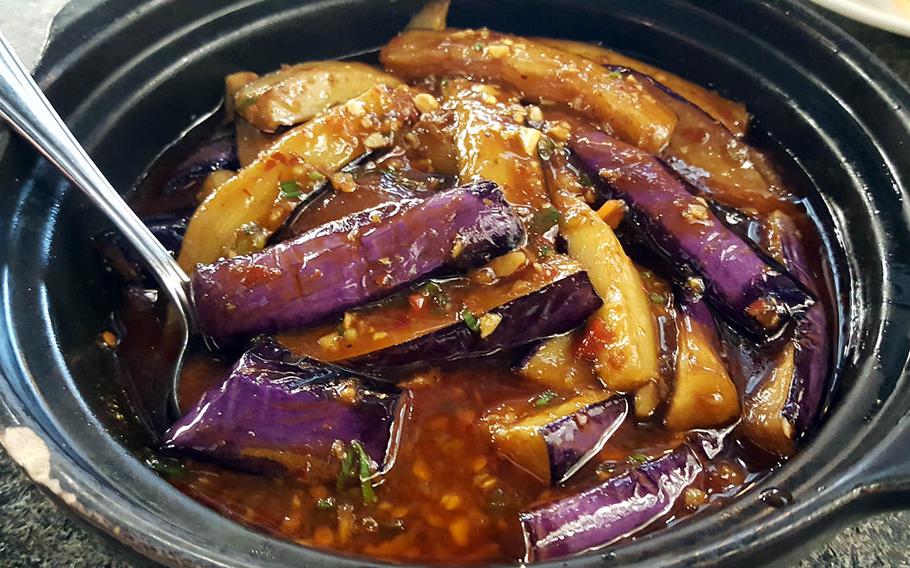 Buy Photo
Sliced eggplant in a spicy garlic sauce has a sweet-and-sour taste and can serve as a welcome reprieve from the hotter fare at Chengdu Taste in Honolulu. (Wyatt Olson/Stars and Stripes)

But few come close to presenting authentic Sichuan-style fare in all its chili glory.

The style of most Chinese restaurants in the U.S. has descended from a wave of immigrants from the Middle Kingdom who arrived more than 150 years ago. Those transplants could not find many of the ingredients they’d used back home and made do with what was on hand.

Go into a typical Chinese takeout joint today and most dishes are limited to broccoli chunks, onion, beef or chicken, bean sprouts and those inexplicable baby ears of corn. They are often immersed in a corn-starchy sauce that’s either slightly sweet or has no taste at all.

Authentic Sichuan food is the polar opposite of this, and Chengdu Taste in Honolulu gets it exactly right. It’s a small chain with three outlets in California and one in Las Vegas.

While the menu at the Honolulu restaurant is shorter compared to its California cousins — and minuscule compared to Sichuan-style restaurants in mainland China — it’s got some real goodies and a few hard-to-find treats.

Foremost among those was the mung bean jelly noodle with chili sauce ($7.99), which I’d never found outside of China before. The pencil-sized noodles are smothered in chopped green onions, sesame seeds, fried peanuts, black vinegar and a zesty red sauce made with blended fresh and preserved chili peppers.

The dish comes in a small bowl, and if you’re sharing with someone — and, hey, the common dish is the Chinese way — you might find yourself craving more after it’s all gone.

A longtime favorite of mine is toothpick lamb ($17.99). The mini-kabobs are literally one small bite of cumin-laden lamb skewered with a toothpick. They are fried with dried red chili peppers and mixed with Asian celery.

You don’t want to leave Chengdu Taste — named after the provincial capital of Sichuan — without having at least one dish loaded with the spice that truly sets this cuisine apart from all others: the Sichuan peppercorn.

About the size of black peppercorn, they aren’t actually a pepper but the dried berry of a prickly ash tree. Their taste is subtle, like a hint of pine or cedar, and a bit acidic. But the central part of the “taste” is the way they kind of numb parts of your mouth, tongue and lips, creating a sensation that’s not matched by any other herb or spice.

The boiled fresh fish with green pepper ($16.99) is as good a dish as any to experience the splendors of Sichuan peppers. The chucks of fish are covered with green and red chilies. Cucumber bits and bean sprouts give the dish a little crunch, and the Sichuan peppers float throughout. The fish melts in the mouth.

If you’re not down with the whole seafood thing, you can get a good hit of Sichuan peppers with the ma pu tofu ($10.99) or the sliced beef and tripe ($12.99), which, served cold, seems to compound the delicious numbing effect of the peppers.