Chart a path to a destination using Mannheim’s city grid 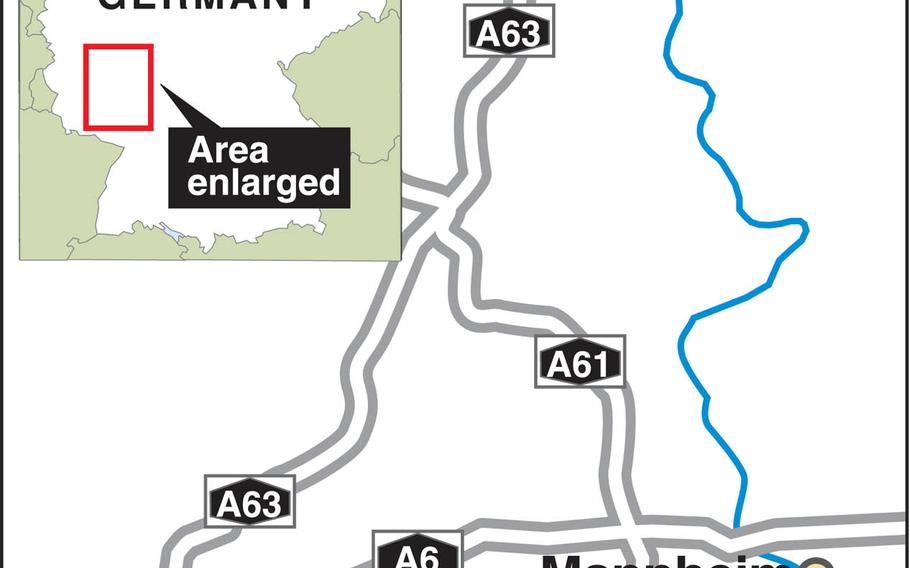 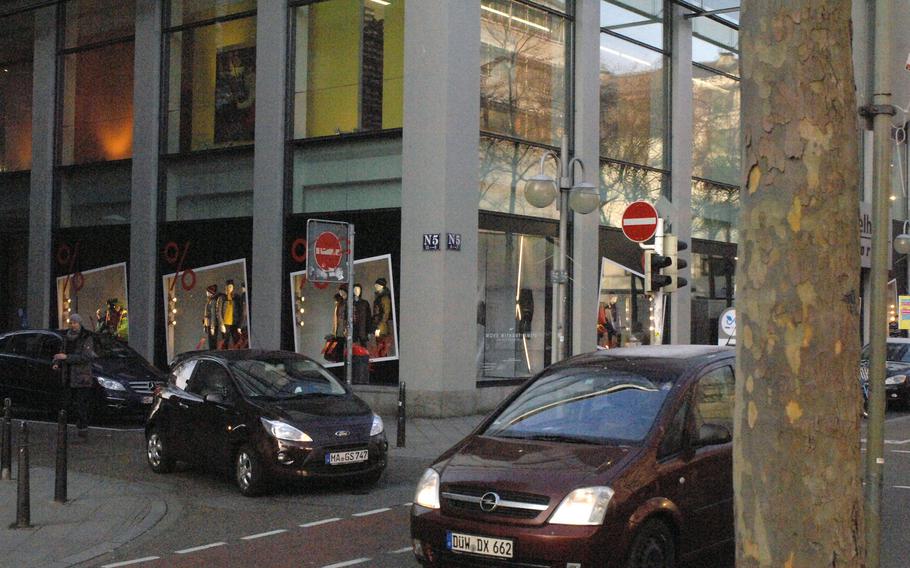 Buy Photo
Cars and pedestrians navigate around block N5 in Mannheim, Germany. The streets in Mannheim's city center are arranged in a gridlike pattern of numbers and letters. (Gregory Broome/Stars and Stripes) 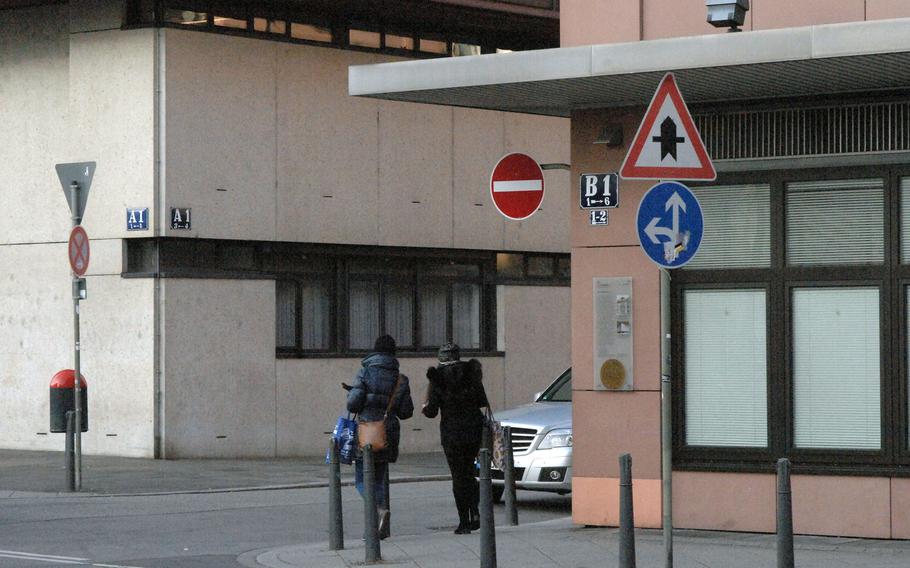 Buy Photo
Pedestrians cross from square B1 to A1 in Mannheim, Germany. Mannheim's city center is arranged in an orderly pattern of numbered and lettered streets. (Gregory Broome/Stars and Stripes) 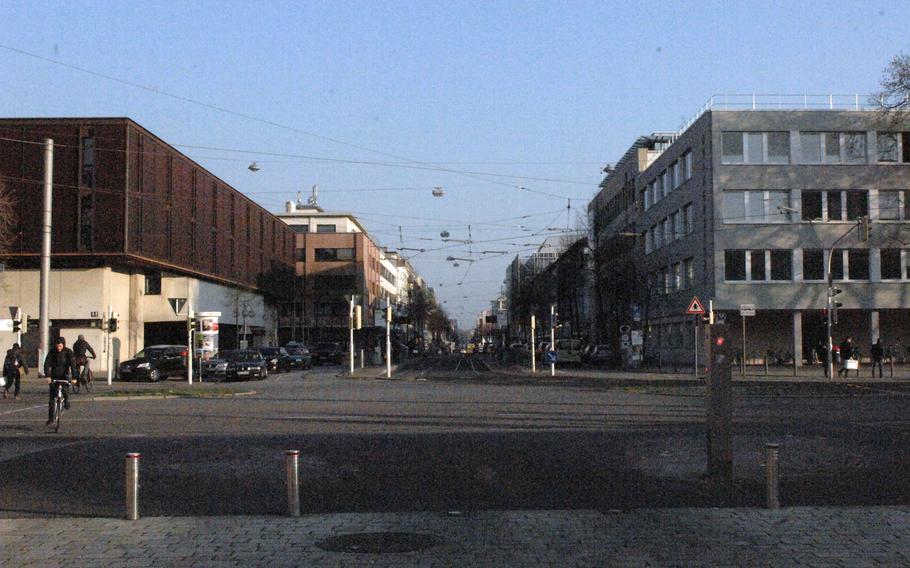 Buy Photo
The view from the front of the baroque palace in Mannheim, Germany, down Breithestrasse, the north-south axis of the gridlike city layout. To the left is A1; across the street is L1. (Gregory Broome/Stars and Stripes) 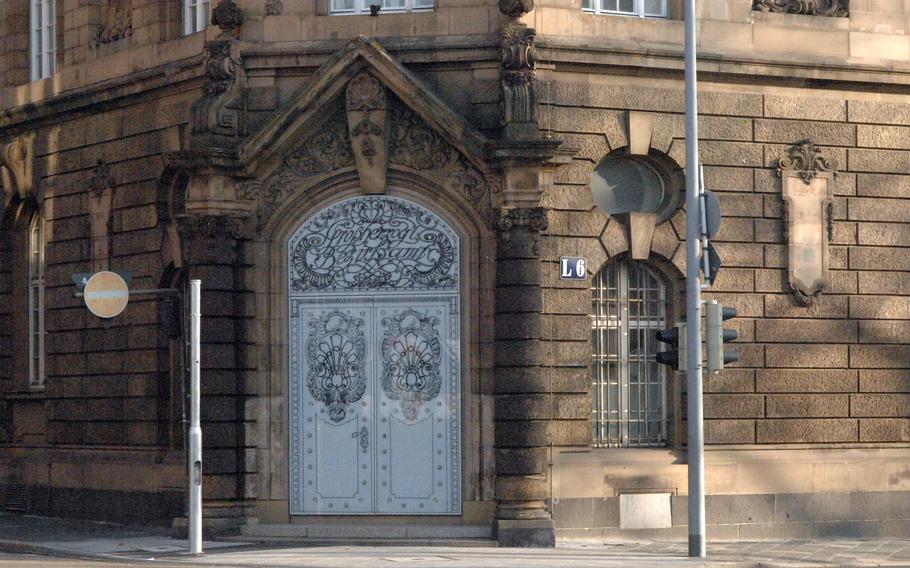 Buy Photo
An ornate door stands at the corner of block L6 in Mannheim, Germany. Mannheim's city center is arranged in an orderly grid of streets identified by numbers and letters. (Gregory Broome/Stars and Stripes) 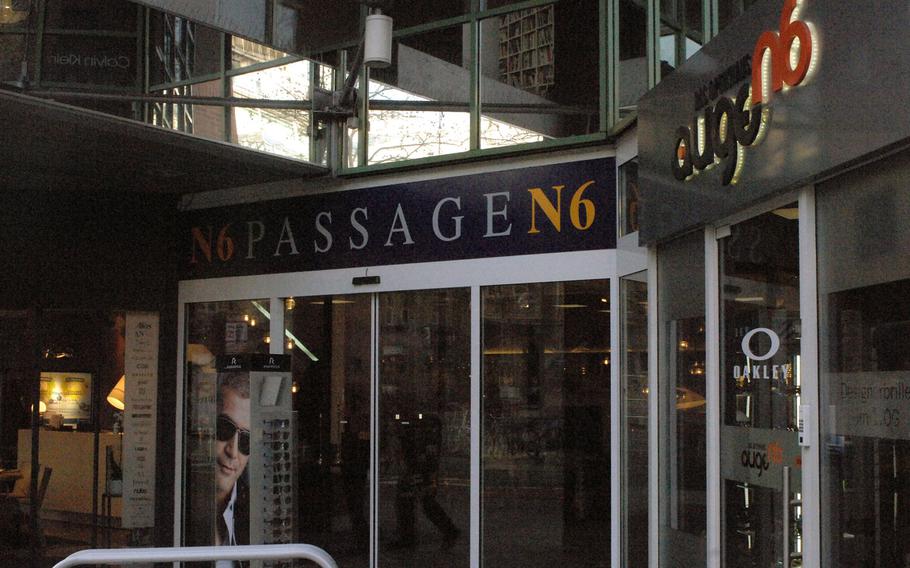 Buy Photo
Some local businesses in Mannheim, Germany, prominently feature their address on signage and marketing materials, like these retail stores located at N6. The city center is arranged in an orderly grid of streets identified by numbers and letters. (Gregory Broome/Stars and Stripes)

Europe is famous all over the world for its magnificent city squares, from London’s Trafalgar Square to Prague’s Old Town Square, from Brussels’ Grand Place to Mannheim’s G4.

Well, maybe one of those doesn’t belong.

Mannheim is an attractive enough southwestern German city, at least once you’re through the thick of smokestacks that mar your approach. Its city center contains many worthy attractions, including several lovely churches, interesting museums, the impressive Baroque Palace and the signature Wasserturm, or water tower.

But Mannheim’s inner city is noted as much for its utility as its aesthetic qualities. The dense urban area between the Rhine and Neckar rivers is built on a simple grid system sometimes referred to as the Mannheim Quadrate. In contrast to the medieval labyrinths of many European cities, the layout makes finding your way — once you’ve oriented yourself — an almost literally elementary task.

According to Mannheim’s official tourist website, tourist-mannheim.de, the city’s plan dates back some four centuries, to when Frederick IV, elector palatinate of the Rhine, sought to fashion a city that was easily navigable. Over time, the original named streets gave way to the current system of letters and numbers.

Accordingly, a visitor to Mannheim can quickly grasp the city’s layout. Stand in the courtyard of the Baroque Palace, on the side of the palace opposite the Rhine, and look into the city.

The street extending out in front of you, Kurpfalzstrasse, is the north-south axis to the grid. To your left is square A1. Walk another block away from the axis street, and you’ve reached A2, then A3, and so on. Walk a block straight down the axis street from the palace, and you’re at B1. This pattern continues through the letter K, which borders the Neckar. The same system repeats itself to the right of the axis street, running from L, the closest to the palace, through U, again at the Neckar.

Mannheim’s city grid might be enough to divert a certain breed of traveler on its own merit, but it can also be used to chart a path to a more conventional tourist destination. The Wasserturm marks the grid’s eastern extreme at P7, Paradeplatz offers a pleasant patch of green space at O1, and the excellent Reiss Engelhorn Museum is worth a visit at C5.

Mannheim’s squares might not rival Europe’s best in terms of fame, history or beauty. But at least you won’t get lost trying to find them.

DIRECTIONS Mannheim is about an hour east of Kaiserslautern by car or train. By car: Take A6 most of the way, then veer south on A61 and enter the city from the west on A650. Proceed across the Rhine River and follow signs to the Hauptbahnhof. By rail: Direct trains from Kaiserslautern depart frequently throughout the day. However you get to the train station, take a left out of the front entrance and make the short walk to the Baroque Palace, the ideal starting point to orient yourself to the city’s grid system.

FOOD Abundant and varied. Mannheim’s tourism website says, “Thanks to the city’s inhabitants originating from over 170 countries, Mannheim has a diverse range of cuisines on offer.”

INFORMATION A tourist welcome center is located at Willy-Brandt-Platz 5, 68161 Mannheim (close to the main train station); phone: (+49) (0) 621 293-8700, email: touristinformation@mannheim.de. Read more about the Quadrate and other things to do in the “city of squares” in English at tourist-mannheim.de.