The logo of the Arsenal soccer team and a mural of legendary Arsenal players adorn the outside of Emirates Stadium in London. The team's "Arsenalization" project increased the amount of historic Arsenal imagery on the new, modern stadium. (Courtesy of Jackie Broome)

The logo of the Arsenal soccer team and a mural of legendary Arsenal players adorn the outside of Emirates Stadium in London. The team's "Arsenalization" project increased the amount of historic Arsenal imagery on the new, modern stadium. (Courtesy of Jackie Broome) 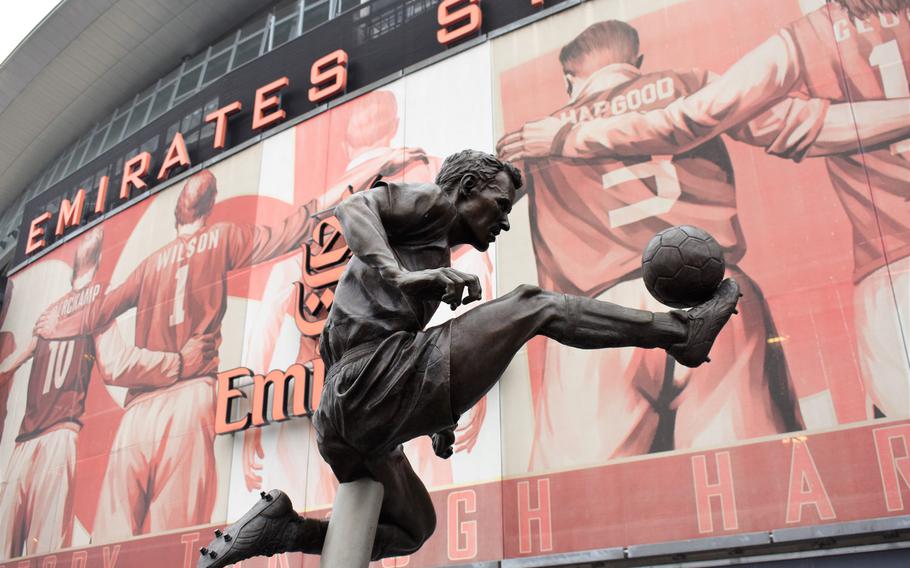 A statue of former Arsenal star Dennis Bergkamp is one of many such statues arranged around the soccer team's London home, Emirates Stadium. (Courtesy of Jackie Broome) 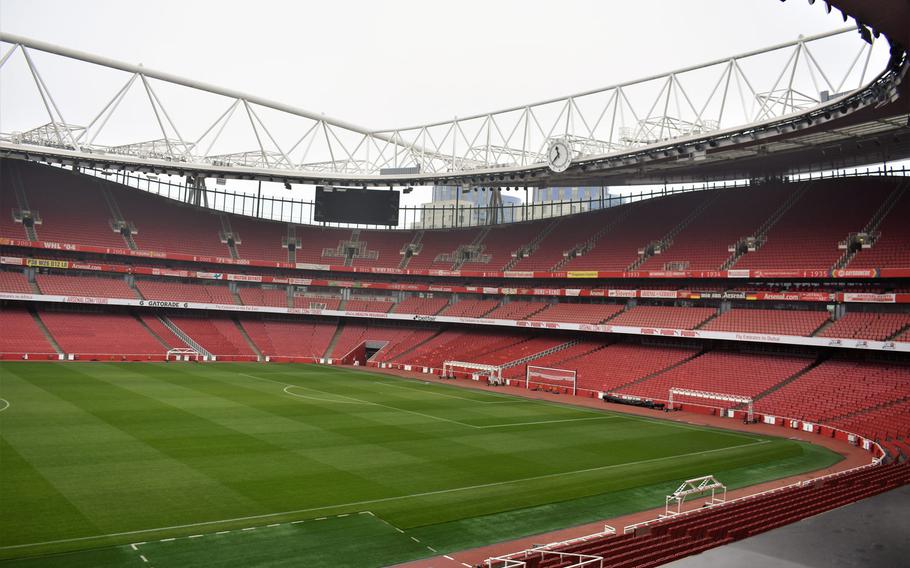 A view overlooking the field at Emirates Stadium in London, home of the soccer club Arsenal. The stadium was completed in 2006, replacing the team's nearby former home, called Highbury. (Courtesy of Jackie Broome) 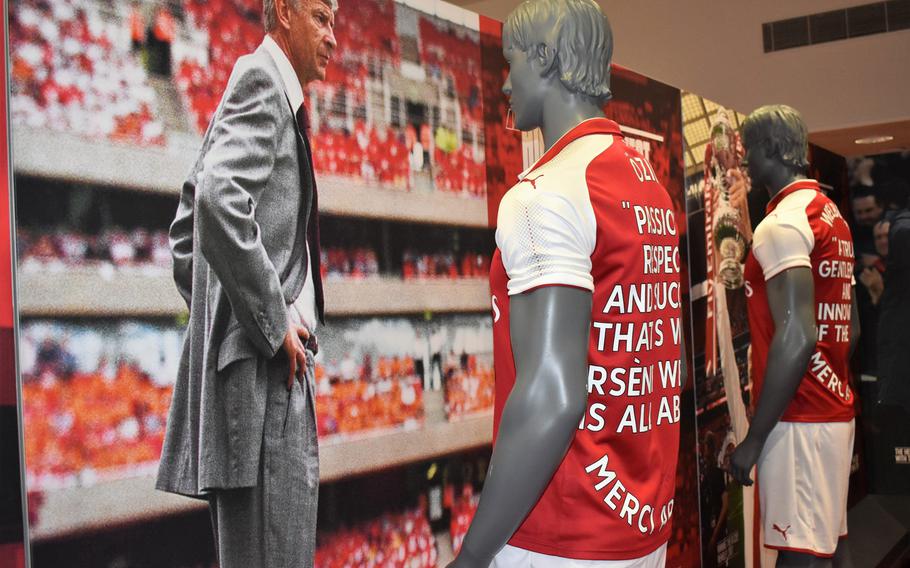 The self-guided, electronics-assisted tour of Emirates Stadium in London immerses visitors in the imagery and history of Arsenal, the Premier League soccer team that calls it home. (Courtesy of Jackie Broome)

The iconic cannon insignia of the Arsenal soccer team is painted into the lower bowl of Emirates Stadium in London. A tour of the stadium offers visitors a chance to sit in the field-level seats of the team's players and coaches. (Courtesy of Jackie Broome)

There are so many worthy ways to spend one’s time in London that a tour of a soccer stadium might not rank high on many visitors’ lists. But a walk through one of the 20-odd such facilities dotting the city and its surrounding region offers a valuable insight into an essential part of British culture.

Emirates Stadium, home of the Premier League club Arsenal, isn’t the largest of its kind in London; that honor goes to the better-known Wembley Stadium. And it’s certainly not the oldest, having just been completed in 2006. But in its fusion of the historic and the modern, in the way it dominates a neighborhood while also attempting to embed into it, Emirates Stadium is perhaps the quintessential London football stadium.

For reasons too complicated to fully explore in this space, Arsenal moved on from its historic home, Highbury, in the late 1990s and selected a nearby tract of industrial land on which to build a larger, more lucrative replacement. Emirates, the Dubai-based airline, purchased sponsorship rights to the stadium and the team’s uniforms. But the sophisticated new building was too sterile for many passionate Arsenal supporters, and the club sought to appease those fans with a project known as “Arsenalization.”

The results of that effort are unmistakable. The massive structure is wrapped in soaring murals of Arsenal players arranged with their arms around each other, symbolically encircling the monolithic building in the club’s storied history. Arsenal legends are captured mid-kick in statues arranged around the stadium. Inside, a section of seats on the lower bowl are painted to present an image of the club’s iconic cannon insignia.

The tour of the stadium, self-guided with the aid of a tablet-like device and headphones presented at entry, immerses visitors even deeper into the club’s world. The path winds through behind-the-scenes sites like the locker rooms, training facilities and the tunnel leading to the field. One can spend time in the opulent environs offered to the team’s executives and distinguished visitors, then occupy the same field-level chairs that host the Arsenal coaches and players on match days.

All told, it’s an unforgettable experience not just for the devoted soccer fan, but for any visitor looking for a new angle from which to view London.

DIRECTIONS: Located at Homsey Road in northern London. There’s an Arsenal stop on the Piccadilly line of the Underground just a short walk from the stadium.

FOOD: There’s a small concession stand just outside the stadium, and lots of dining options in the surrounding area.

INFORMATION: Arsenal gear is not required, but seems to be strongly encouraged; they’ll happily sell you some in the gift shop if you come unprepared.