Carter tells students the value of joining the military 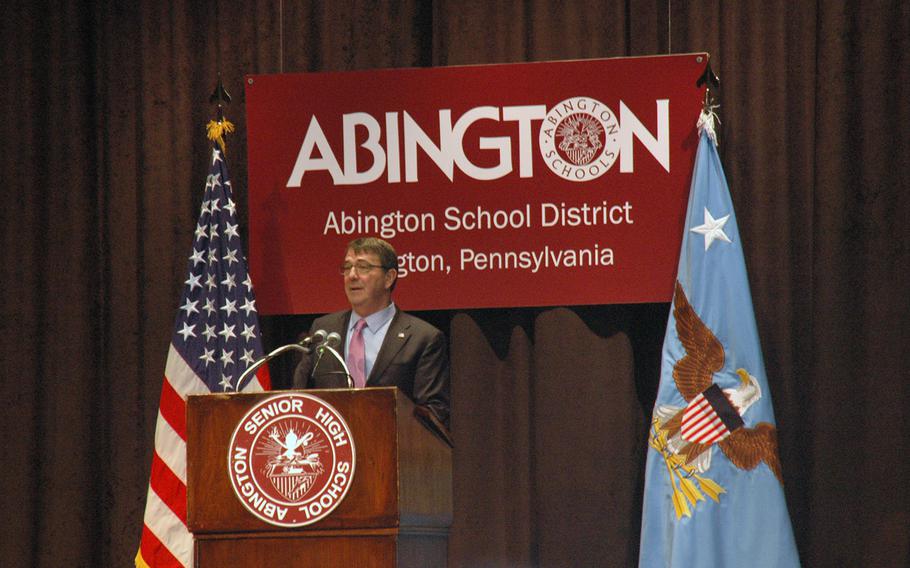 ABINGTON, Pa. — Joining the military has its perks, Secretary of Defense Ash Carter told students Monday as part of a national trip focused on recruiting and retention to build “the force of the future.”

In a speech at Abington Senior High School, Carter talked to high school students about what their country can do for them.

“We too often talk about sacrifice alone,” he said. “We probably don’t spend enough time highlighting the opportunities that exist and … how fulfilling and rewarding military life can be.”

The Pentagon chief said popular culture has given young people a skewed view of what it’s like to be in the armed forces.

“Movies like ‘American Sniper,’ videogames like ‘Call of Duty,’ TV commercials with troops coming home – you see all those, and they’re most likely where you see our military every day unless you have a family member or a friend who’s serving,” Carter told the students, but those images are “only a slice of what our military does.”

He pointed out that servicemembers get to work with cutting-edge technologies like cyber, robotics, and biomedical engineering. And he noted that not all troops deployed overseas are at austere outposts or combat zones.

The head of the Defense Department touted the financial incentives of serving in the military, noting that all troops are eligible for GI Bill benefits, which will pay up to $284,000 for a veteran to attend college.

“At a time when student loans account for over $1 trillion of debt in America, that’s unbeatable,” he said.

He said that many employers value military service, making the armed forces a potential steppingstone to a successful career in the private sector.

“We want people to consider military and public service because, when it comes to working in national security, no matter what you do – military or civilian – you will be better off for having been a part of this incredible mission,” he said. “Whether it’s the people, the skills or the experiences, nothing else compares.”

Still, DOD needs to offer more in the coming years, he said.

As the economy improves and 9/11 is no longer the rallying cry it once was, military leaders expect that recruiting high-quality people will become more challenging. To meet recruiting goals, the services must bring in 250,000 new people annually.

“Your generation has lots of choices in life. … especially if you go to [a school like] Abington,” Carter told the students. “So we’re going to be competing hard for talent like yours around the country” and “I will drive change to build what I call ‘the force of the future.’ ”

He said DOD needs come up with new ways to attract young people who may not remember 9/11, including:

Helping people pay off their student debt if they join the military. Letting older, mid-career people who possess high-demand skills (like cyber) join the force. Giving people even more flexibility and choice in deciding their next job in the military. Expanding pilot programs that let people pause their military careers while they’re getting a degree, learning new skills or starting a family. Carter, who spent much of his career working at the Pentagon but has never served in uniform, also wants to make it easier for people to become DOD civilians.

“I know that not everyone here in this room is … thinking about military service, and that’s OK. But if you’re like I was and you’re still interested in serving your country and making a better world, we need to be ready to help with ways you can serve as a civilian,” he said. “Right now that’s not something our local recruiters offer, but we have to rethink that.”

Monday’s speech kicked off Carter’s national trip to talk about the value of military service.

On Tuesday, he’ll do a town hall meeting with students at Syracuse University and hold a roundtable discussion with leaders of the Institute for Veterans and Military Families, an organization focused on tackling the economic, social and policy concerns that veterans and their families face.