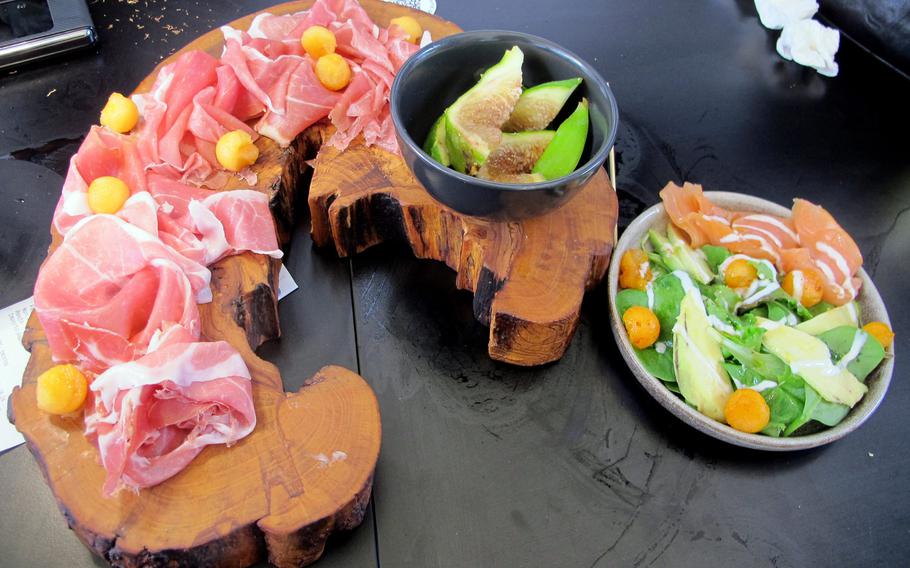 Buy Photo
Two appetizers at the Cantina del Tormento in Vicenza make more than a meal for one. At left is prosciutto and melon, with a side of figs. Salmon, avocado and greens are to the right. (Nancy Montgomery/Stars and Stripes)

Buy Photo
Two appetizers at the Cantina del Tormento in Vicenza make more than a meal for one. At left is prosciutto and melon, with a side of figs. Salmon, avocado and greens are to the right. (Nancy Montgomery/Stars and Stripes) 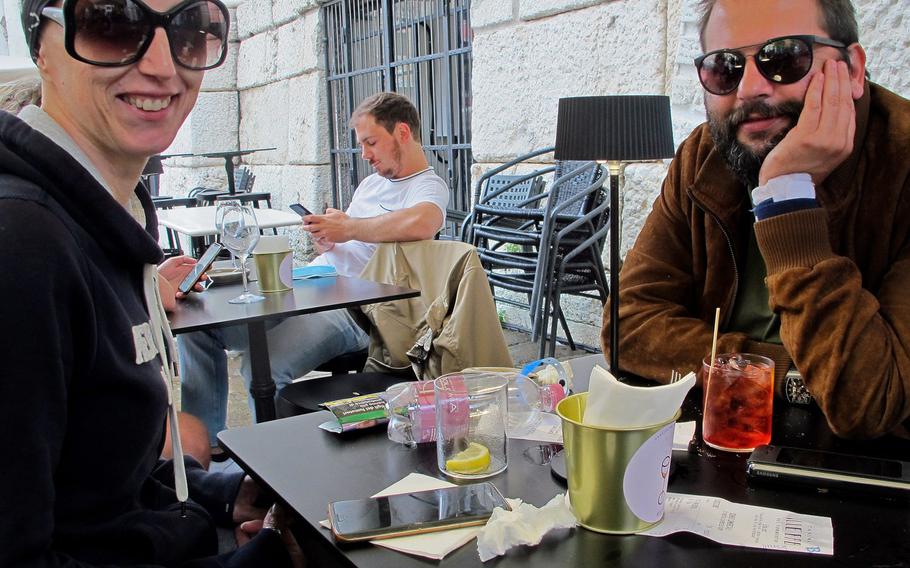 Buy Photo
All tables at the Cantino del Tormento are outside on the Piazza delle Erbe, giving Italian patrons a reason to wear sunglasses even when it's overcast. At left is Italia. Her friend, facing the camera, is enjoying his Negroni. (Nancy Montgomery/Stars and Stripes) 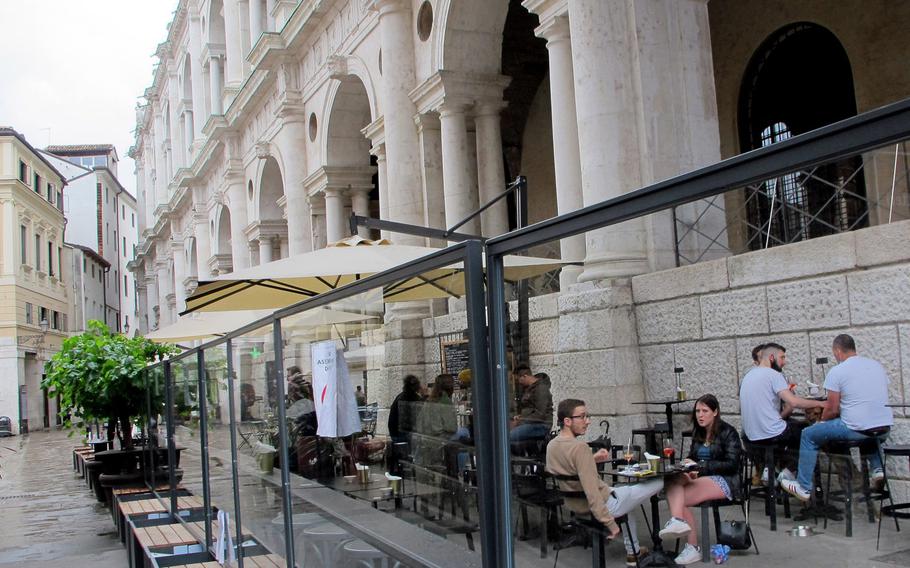 Buy Photo
Cantino del Tormento, a wine and tapas bar, is located on the backside of the Basilica Palladiana in the Piazza delle Erbe in downtown Vicenza. (Nancy Montgomery/Stars and Stripes) 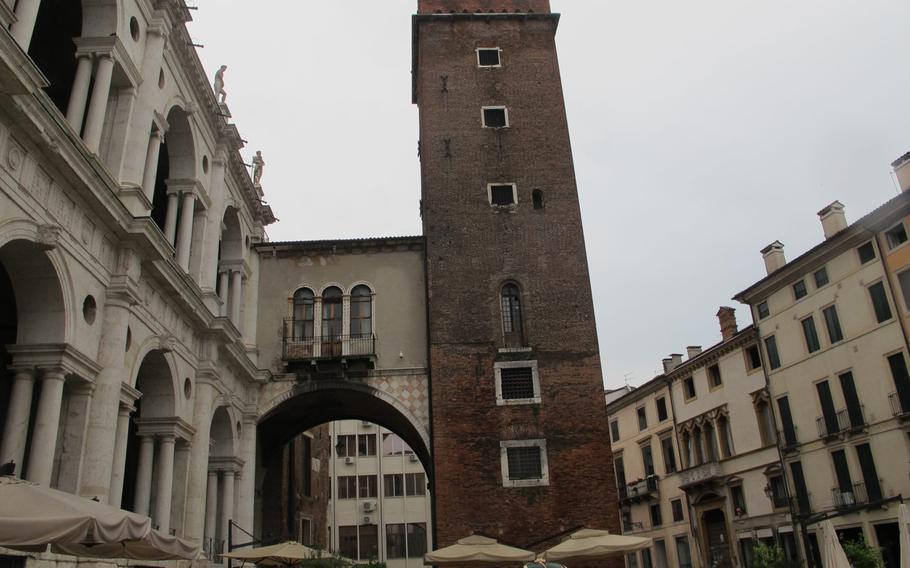 Buy Photo
The Tower of Torment, from which the cantina got its name, is a 12th century structure in downtown Vicenza that was used for centuries as a prison, including during the Inquisition, infamous for its cruel tortures. (Nancy Montgomery/Stars and Stripes) 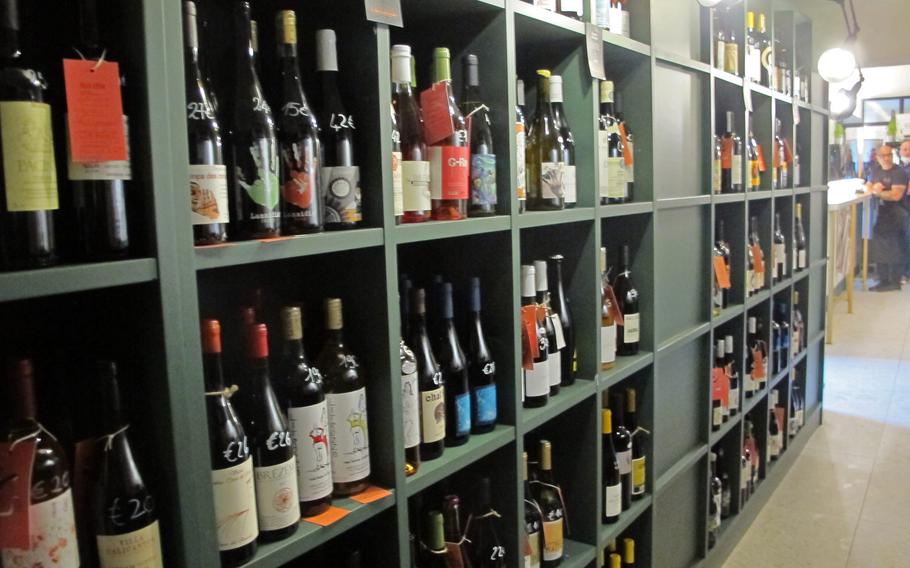 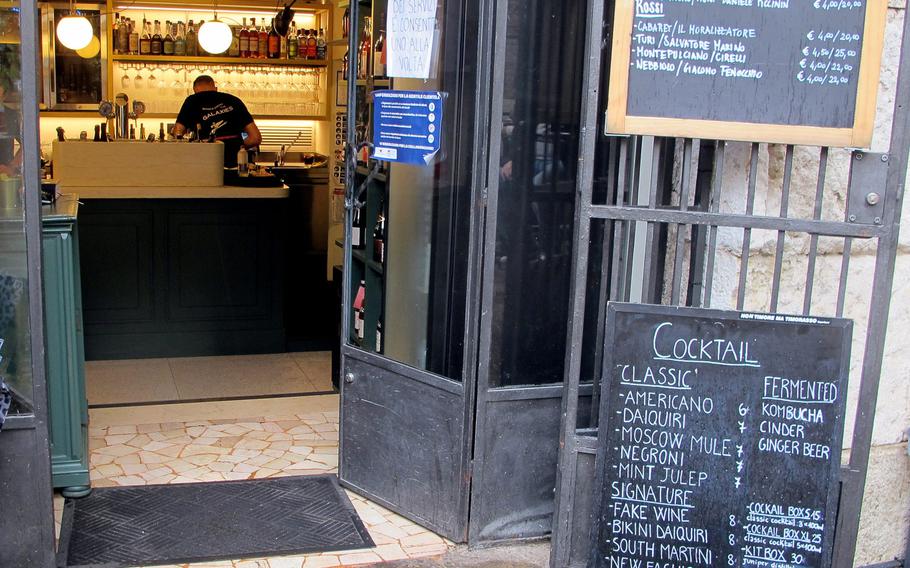 Buy Photo
The Cantina del Tormento's kitchen and wine collection is located inside the Basilica Palladiana but all tables are outdoors. Wine, cocktails and appetizers are listed on two chalkboards. (Nancy Montgomery/Stars and Stripes)

The Piazza delle Erbe in downtown Vicenza boasts numerous bars and restaurants where people can eat, drink and be merry just steps away from an ancient prison that was once the scene of the most abject misery.

But none has proclaimed that connection so boldly as the Cantina Del Tormento.

The cantina sits next to a 12th century tower, the Torre del Tormento, or Tower of Torment. It is one of the few remaining medieval towers in Vicenza, and was used as a prison for centuries, including during the Inquisition, infamous for the horror of its tortures and its persecution of witches, heretics, nonbelievers, Muslims and Jews from the 12th Century to 1808, when it was abolished by Napoleon.

The cantina opened a couple of years ago. It bills itself as a wine and tapas bar, so I was looking forward to dining al fresco on the backside of the Basilica Palladiana on little plates of battered and fried squid, new potatoes with aioli, simmered meatballs, stuffed olives and other Spanish delights.

That’s not what’s on the menu, though. With the one exception of chorizo, on offer are typical Italian appetizers with ingredients like bufala mozzarella, salted cod and steak tartare. There are salads with chicken and vegetables, and perhaps the most cliched Italian appetizer of all time, prosciutto and melon.

I had that. It was quite serviceable and grandly plated on a large olive-wood board. I also ordered the salmon tacos. They were out of tacos, but the dish, with cured salmon, avocado and greens, worked nicely as a salad. Each cost 6 euros.

The cantina is known for the quality of its cocktails and large selection of natural wine. I can attest to both. I had my first Negroni, made of one part gin, one part vermouth rosso and one part Campari, and decided it would not be my last.

I also had a glass of white wine. I think it was “natural,” meaning made from organically grown grapes, with only wild or indigenous yeasts used to ferment the juice and with little to no added sulfites. In any event, it was crisp, well-balanced and refreshing. It cost 4 euros.

I went on a rainy weekday and many tables, all located outside in the piazza, went unused. But on a recent sunny weekend evening, it was jammed. Reservations are a good idea.