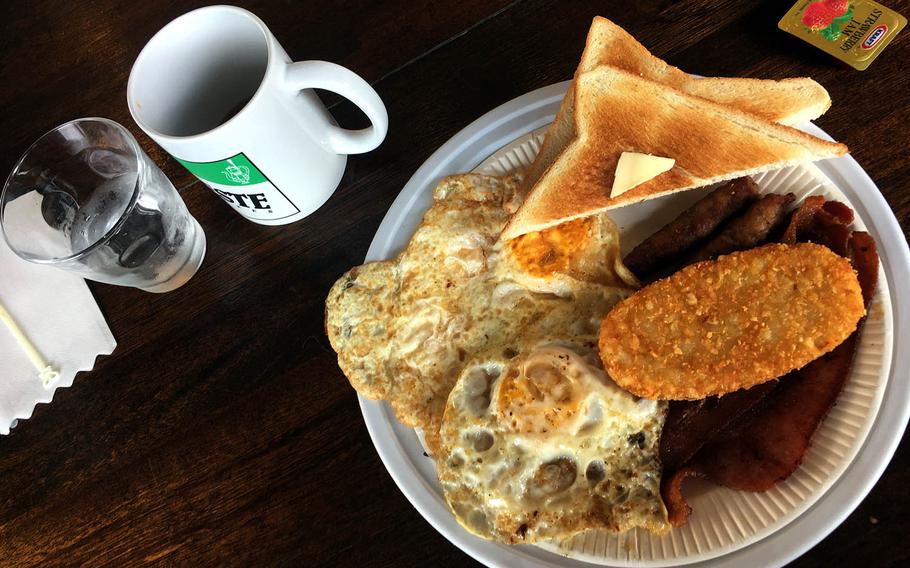 Breakfast fare at Burger Bear on Okinawa includes a traditional All-American breakfast, a pork-chop meal with two eggs, as well as pancakes. (Dave Ornauer/Stars and Stripes)

Breakfast fare at Burger Bear on Okinawa includes a traditional All-American breakfast, a pork-chop meal with two eggs, as well as pancakes. (Dave Ornauer/Stars and Stripes) 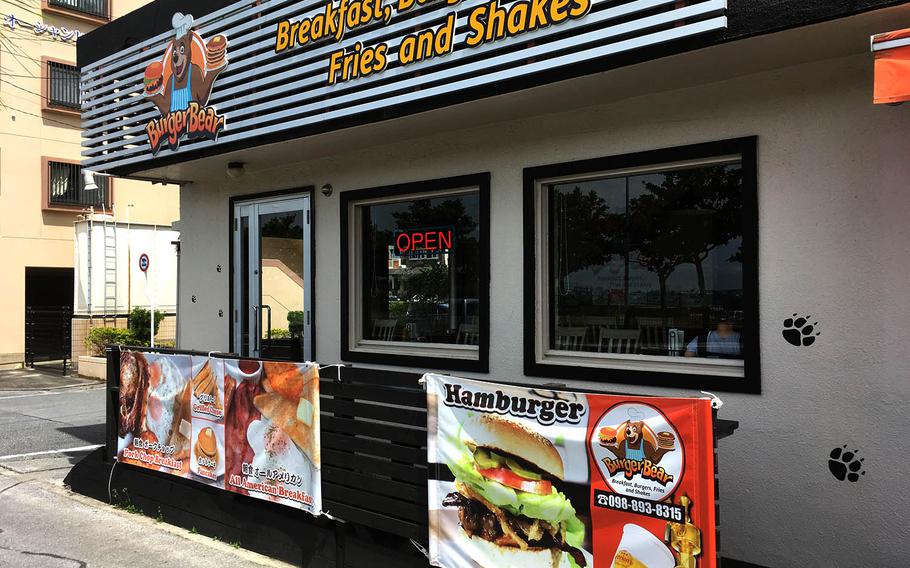 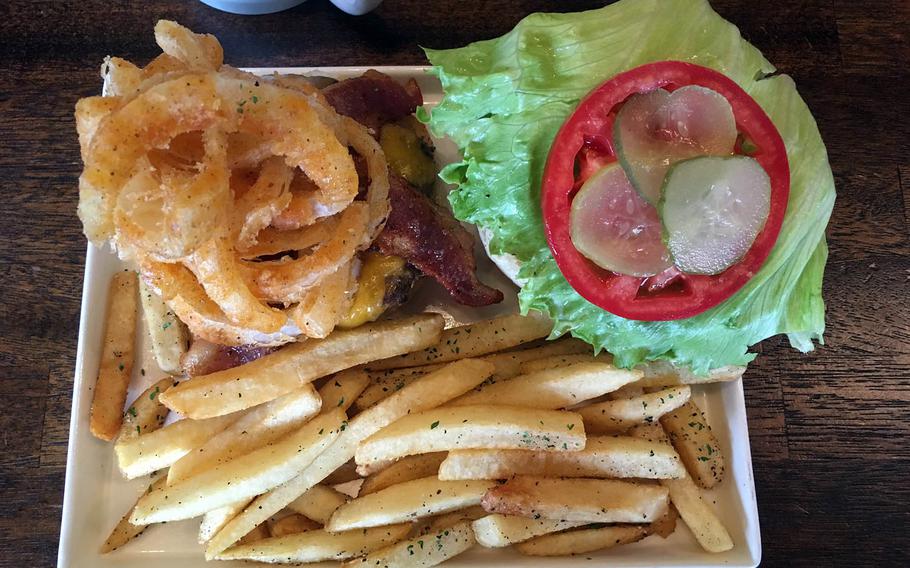 Burger Bear's Mama Bear burger is a beast of a meal: A half-pound patty, garnished with pickles, tomato, lettuce, bacon slices and fried onion rings piled high, accompanied by a side of French fries. (Dave Ornauer/Stars and Stripes) 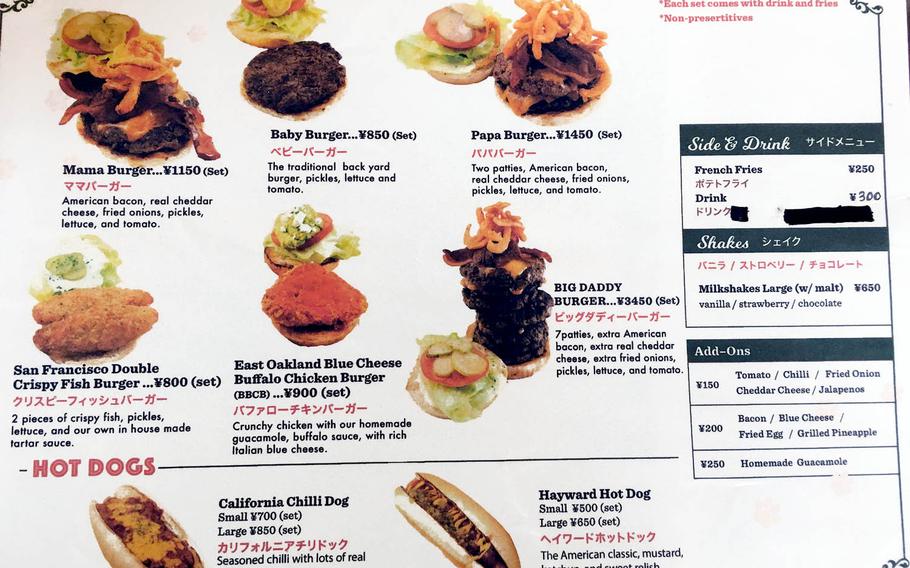 Burger Bear's menu offers a wide selection of burgers in a variety of sizes. Those looking for non-burger options can choose from a selection of of dishes, including the San Francisco Double-Crispy Fish Burger and the East Oakland Bleu Cheese Buffalo Chicken Burger. (Dave Ornauer/Stars and Stripes) 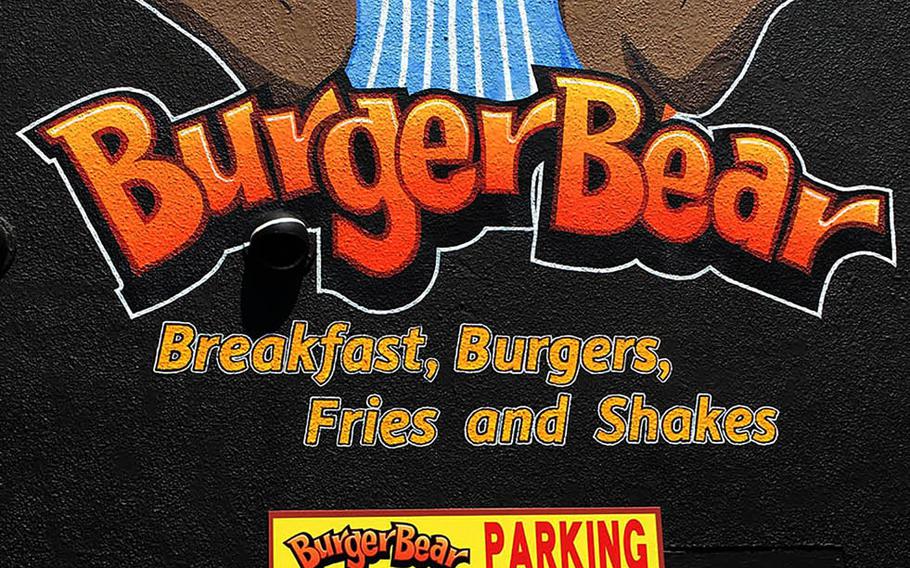 Burger Bear's clientele is mostly Japanese, but a large portion of servicemembers come from nearby bases such as Camp Foster, Marine Corps Air Station Futenma and Kadena Air Base. (Dave Ornauer/Stars and Stripes)

The customer sat and stared, his mouth agape, amazed at the size of the hamburger on the plate in front of him.

He had heard, even read online, about the size of the delectable treats offered at Burger Bear, a relatively new restaurant located on Futenma-Keigo Dori near Camp Foster on Okinawa — but the customer wasn’t expecting this: A half-pound patty, garnished with pickles, tomato, lettuce, bacon slices and fried onion rings piled high, accompanied by a side of French fries.

“Wow. I can’t even open my mouth wide enough for this one,” the customer said, doing his best to consume Burger Bear’s Mama Burger.

Across the room, the conversation turned to the restaurant’s Big Daddy Burger — which includes the same toppings as the Mama Burger, except it boasts seven half-pound patties instead of one. The cost: 3,450 yen (about $33.50). But if you eat the entire burger in 10 minutes and 19 seconds? It’s free.

Only two customers, Smith says, have finished the Big Daddy Burger in one sitting. Another customer regularly orders it to go, with a variety of add-ons. Burger Bear’s new menu, slated to debut in a few weeks, will include an updated version of the Big Daddy containing a whopping ten patties instead of the usual seven.

“It’s a monster when it comes out of the kitchen,” Smith said of the burger.

Smith never served in the military. He met his wife, Yoko, a native of Okinawa, in the States. A family emergency brought the two to Okinawa five years ago for what Smith thought would be a temporary arrangement. Before long, Smith sold his restaurant back in California, and he and his wife have remained in Japan since.

Smith opened Burger Bear last spring and said he was in a quandary as to what to name the place — until his mother back home reminded him of his childhood nickname. Smith always asked for McDonald’s when school would let out, and the Burger Bear moniker stuck.

Burger Bear’s clientele is mostly Japanese, but a large portion of servicemembers come from nearby bases such as Foster, Marine Corps Air Station Futenma and Kadena Air Base. Although it’s a newer addition to the island’s restaurant scene, Smith says Burger Bear is well known and frequently draws crowds at lunch and on weekends.

Plans are to open a second Burger Bear restaurant just outside Camp Foster’s Kitamae Gate as the clientele grows — but no firm expansion date has been set.

Burger Bear’s interior is simple: Open-air seating with dark hardwood flooring, eight tables, a bar that seats six and a play area containing children’s books in Japanese and English. The restaurant offers a spectacular view of Okinawa’s west coast up to Cape Zanpa.

The menu offers classic burger joint fare, including creatively named creations such as the Baby Burger (850 yen) and the aforementioned Big Daddy. Those looking for non-burger options can choose from a wide variety of dishes, including the San Francisco Double-Crispy Fish Burger (800 yen) and the East Oakland Bleu Cheese Buffalo Chicken Burger (950 yen).

Wings with various sauces are available all day, featuring the restaurant’s homemade barbecue sauces. Although the sauces aren’t available for purchase, Smith says he plans to offer his creations for sale soon.

Another of Burger Bear’s guilty pleasures is the Adult Grilled Cheese sandwich, featuring New York-style sharp cheddar and two bacon strips, garnished with garlic. A similar sandwich, sans bacon, is available for the younger crowd on a children’s menu.

The restaurant also features a full line of soft drinks and alcohol. In the mood for something sweeter? A variety of milkshakes are available for 650 yen.

Breakfast fare includes a traditional two-egg All-American breakfast, a porkchop meal with two eggs and pancakes. A tall stack features three cakes about as wide and round as the plate.

“Most people can’t finish” a tall stack, Smith says of the pancakes.

I went with the All-American, but ordered an extra egg, over hard. Included in the platter are two bacon strips, two sausage links, a hash-brown patty and white toast with real butter.

Gazing at the customer who ordered (and completely consumed) the Mama Burger, Smith notes the patron was struggling to finish the fries. At last, the customer waves the white flag.

Smith smiles. “That’s the way it’s supposed to be.”

Directions: From Naha, Marine Corps Air Station Futenma and Camp Kinser, go north on Route 58 to Isa intersection at southwest corner of Camp Foster. Turn right onto Route 81, go up four traffic signals; Burger Bear will be across the street on your right. From Camp Foster, Kadena and parts north, take Route 330 southwest from Kadena, past the Aeon Mall at Rycom Plaza, past Camp Foster. Route 330 becomes Route 81 at the Futenma intersection; keep going straight, four traffic signals; Burger Bear will be on your left. Parking is available.