Bratwursthausle or Roeslein: Who will win between these Nuremberg bratwurst kings? 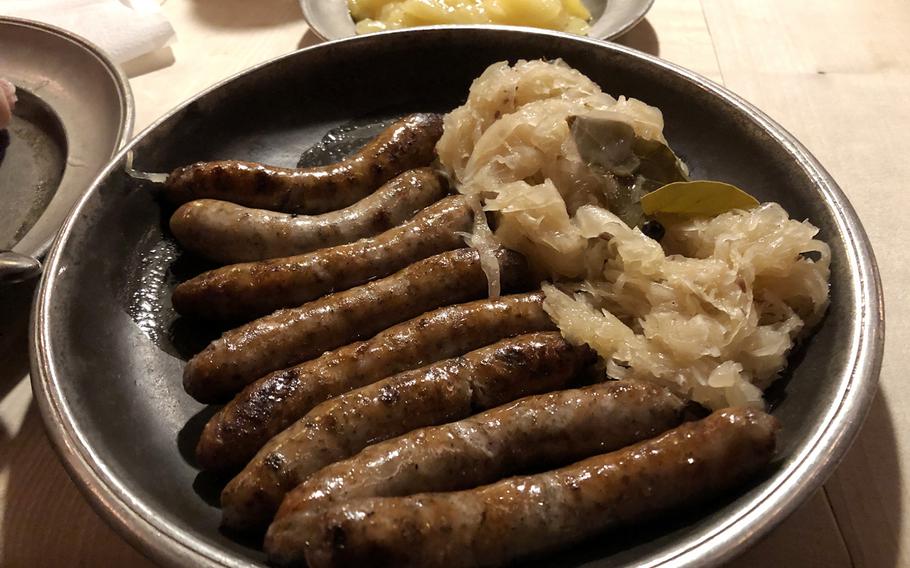 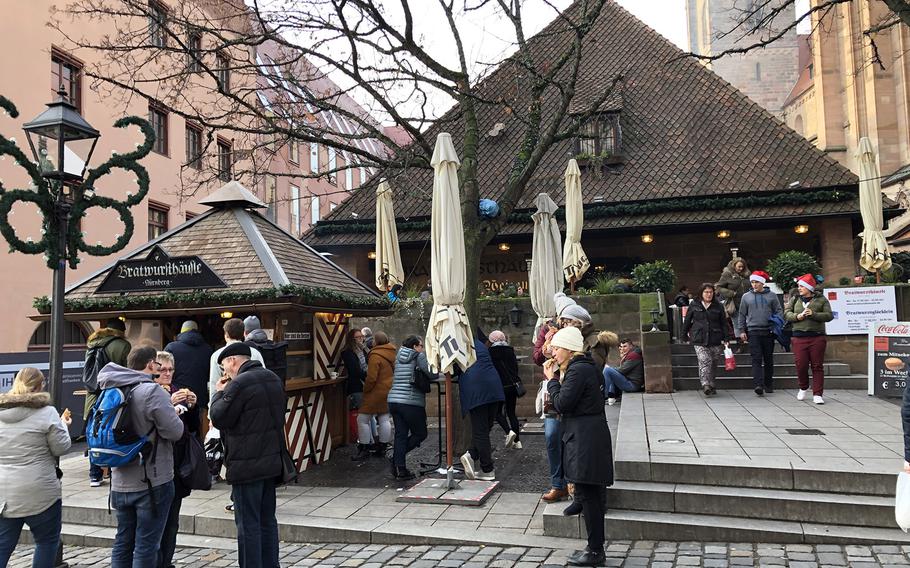 Buy Photo
Several people eat their ''three in a bun'' bratwurst outside Bratwursthausle in Nuremberg, Germany, Dec. 21, 2019. The street food is good, but the more rewarding experience is inside the restaurant. (Erik Slavin/Stars and Stripes) 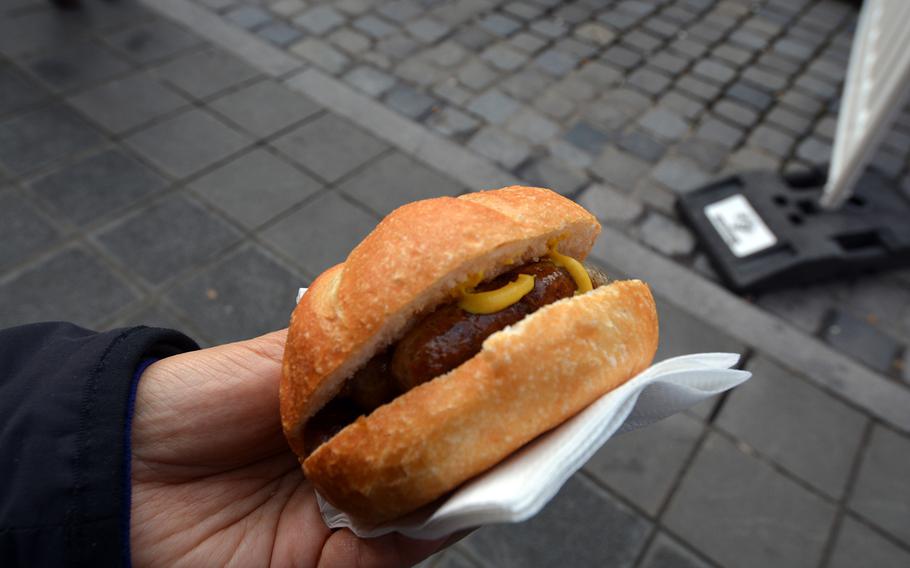 Buy Photo
''Three in a bun'' bratwurst is popular street food in Nuremberg, Germany, but a sit-down meal with bratwurst, sauerkraut and potato salad is a more complete experience. (Erik Slavin/Stars and Stripes) 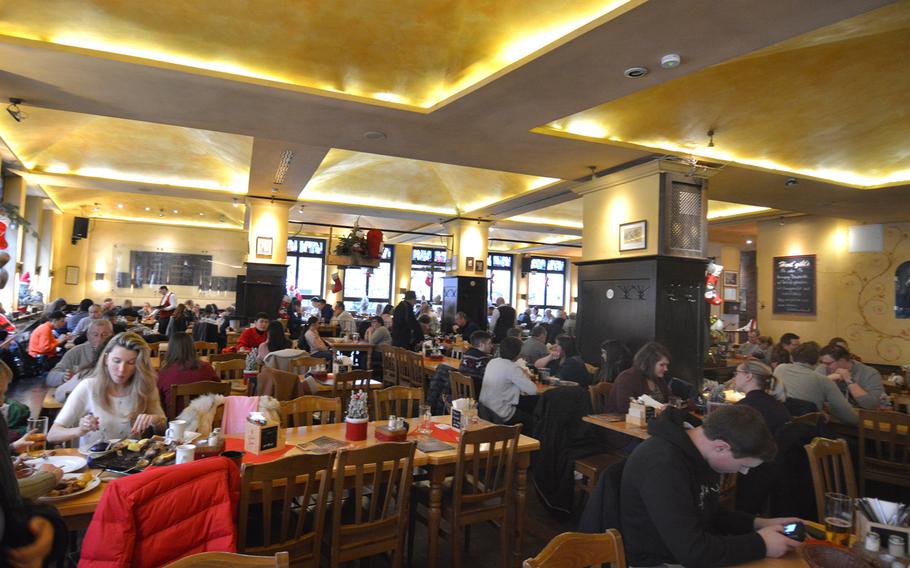 Buy Photo
The lunch crowd dines at Nuremberg's Roeslein on Dec. 21, 2019. Roeslein bills itself as the largest bratwurst restaurant in the world. (Erik Slavin/Stars and Stripes) 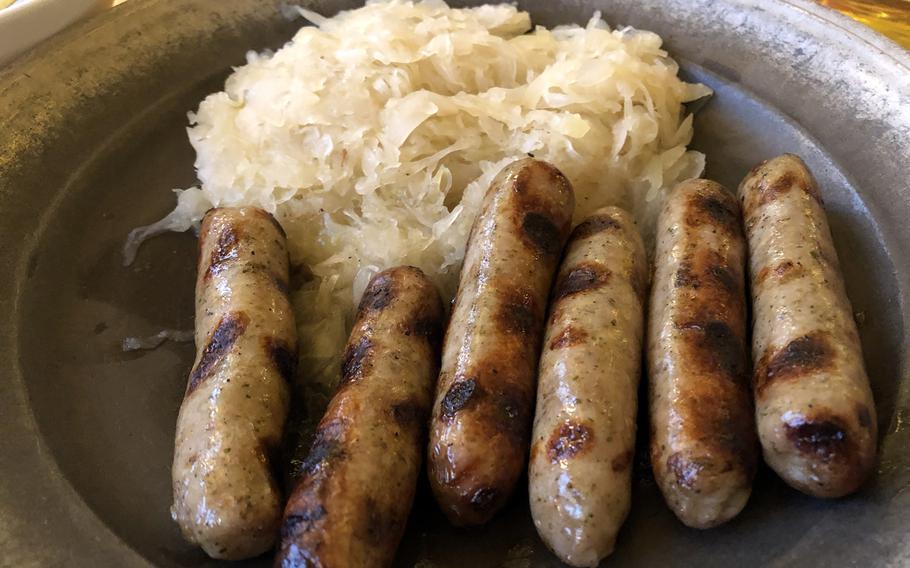 Buy Photo
Bratwurst and sauerkraut, a Nuremberg specialty, are served at the restaurant Roeslein in the city's center. (Erik Slavin/Stars and Stripes) 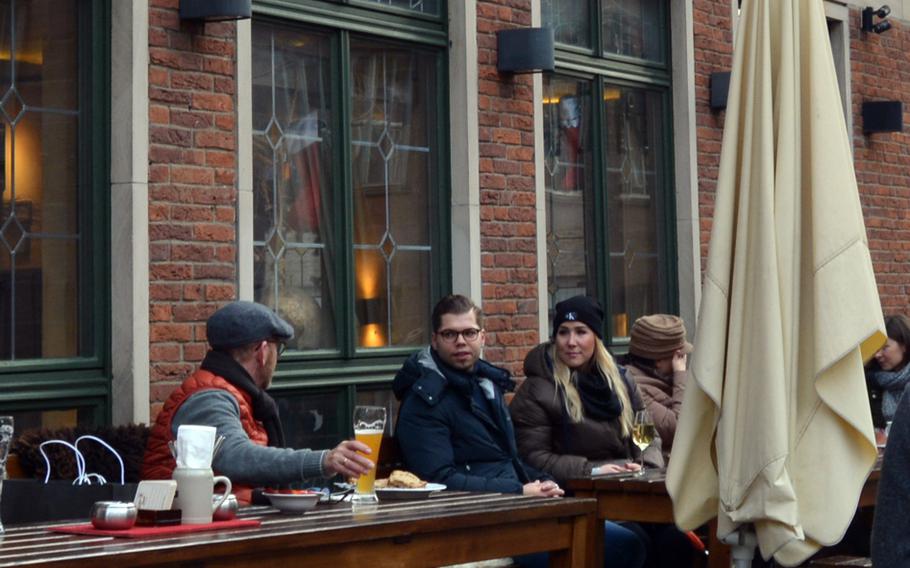 Buy Photo
A few people relax with beer and bratwurst outside Roeslein in Nuremberg, Germany, on Dec. 21, 2019. (Erik Slavin/Stars and Stripes)

Nuremberg’s bratwurst is a pretty big deal in Germany’s vast pantheon of sausages.

They’re emulated all around the country, but often lack the nuance and preparation that sets them apart in this Bavarian city, where historians say they were first served more than 700 years ago.

The links don’t look at all like hefty Milwaukee ballpark brats in buns or the footlong-plus bratwursts at Germany’s seasonal carnivals.

They’re tinier, golden brown, seasoned with marjoram and seared over beechwood. They were the first sausages granted protected geographic status by the European Union, and like beer and many other things German, regulations govern everything about them.

Nuremberg bratwurst are often eaten as street food with an order of “drei im weggla,” local slang for “three in a bun.” But if I’m going to eat sausages backed by this much hype, I’m going to do it right.

Bratwurstgloecklein and its sister restaurant, Bratwursthausle (pronounced hoyss-leh), originated the full bratwurst meal in its current form in the 19th century, complete with an even number of links, sauerkraut, potato salad and horseradish as a condiment.

Roeslein, near the St. Lorenz church in the city center, bills itself as the largest bratwurst restaurant in the world.

I figured the differences between the two would be the twists typically found among restaurants that aim to turn the mundane into the sublime — a German version of the Pat’s vs. Geno’s cheesesteak rivalry in Philly, or Chick-fil-A against Popeye’s. Alas, I was mistaken.

The Bratwursthausle’s terrace was closed for the winter, but we were immediately seated inside at a small communal table surrounded by rustic wood and hanging copper kettles. Two older women at the table from Stuttgart somehow learned everything about the past 10 years of my life from my family during the five minutes I was using the bathroom. The beers were already on the table and the servers were ready to take our order, which is astonishingly quick service for Germany.

While we waited for our bratwurst dinners, we munched on an array of large pretzels and bread — they’ll ask what you ate at the end of the meal and charge accordingly.

The bratwurst came out quickly, considering the crowd, and it was everything it’s cracked up to be. The aged wood and spice blend gave the tender sausages something I’ve never associated with German food — subtlety. The sauerkraut accented with juniper had a soft texture that reminded me of the version found across Germany’s western border in Alsace.

The potato salad wasn’t the chunky, mayonnaise-dominant stuff of childhood picnics, but an artfully sliced side dish with a vinegar base that served as a counterpoint to the bratwurst.

I spent about 16 euros on dinner, drinks and service with a smile. Roeslein was going to have to be pretty spectacular on our visit the next day for lunch to top that.

We walked into Roeslein and were told to take any seats we liked inside the beer hall-style restaurant that can accommodate hundreds, but which was about a third full.

We were able to flag down a waiter after 15 minutes. I ordered a rotbier, which is also an old city specialty. The waiter came back with two beers and left quickly.

The most noticeable thing about my rotbier — which is German for “red beer” — was that it was yellow. The less noticeable but more serious problem was that one in our party ordered a nonalcoholic beer and her face began turning red as she drank, a pretty solid cue that it was a regular beer.

When the waiter came back with the food, he insisted that we had a rotbier and a nonalcoholic beer on the table. We were somewhat surprised, but tried to forget about it and dug in.

The bratwurst was just ... fine. They tasted like sausage, without the beguiling spice or the beechwood aroma. The sauerkraut was also respectable but unnoteworthy. One member of our party did think the similarly vinegar-based potato salad here outdid the one at our dinner.

The waiter walked away, pretending not to hear when we asked to see the manager.

So if you like combative service, potentially dangerous alcohol mix-ups and above-average potato salad, by all means go to Roeslein. But even if you do get a better server, Bratwursthausle should be the clear first choice.

Prices and menu: Between six and 15 euros, depending on number of bratwurst; more extensive list of Bavarian-Franconian dishes, including duck, liver dumplings, pork knuckle, sauerbraten.