Bill would make it easier to fire VA workers, but at what cost to due process? 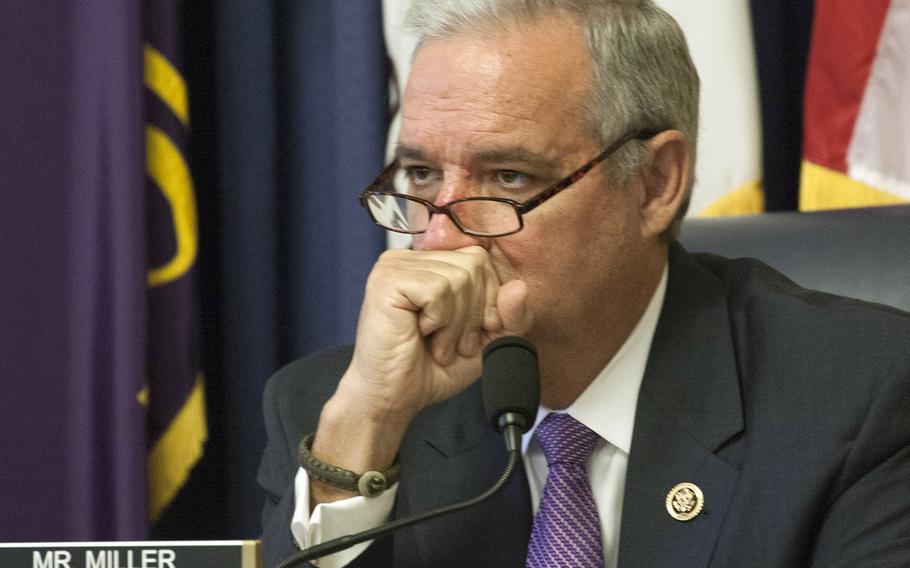 Buy Photo
Rep. Jeff Miller, R-Fla., chairman of the House Committee on Veterans Affairs, listens to testimony during a hearing on problems at VA facilities in Philadelphia and Oakland, Calif. on April 22, 2015. (Joe Gromelski/Stars and Stripes)

WASHINGTON — Making it easier to fire bad Department of Veterans Affairs employees is a popular notion these days, but the details of a bill that backers claim does exactly that may be fraying some alliances forged in the midst of the nation’s crisis in veterans’ health care — including an unusual love affair between conservative lawmakers and government union leaders.

“I would be doing better if I could get Congress to stop doing crazy things right now,” is how American Federation of Government Employees President J. David Cox began a phone call about HR 1994, which creates a fast track for VA Secretary Bob McDonald to fire employees for misconduct.

The VA Accountability Act of 2015, which passed the House 256-170 Wednesday, is the brainchild of Jeff Miller, R-Fla., chairman of the House Committee on Veterans Affairs, who has tirelessly hauled VA officials and senior executives before his committee. It still must pass the Senate and be signed by President Barack Obama, who has threatened a veto.

The Veterans Access, Choice and Accountability Act of 2014 gave McDonald additional flexibility to fire poor-performing senior executives, but many lawmakers and veterans groups have been frustrated at what they see as an inadequate effort to fire those responsible for the nationwide scandal.

The new bill “authorizes the Department of Veterans Affairs to remove or demote a VA employee based on performance or misconduct,” and employees who are removed or demoted have seven days to appeal to the Merit Service Protection Board, which then has 45 days to make a final decision. It covers all employees, not just senior executives.

“I felt it was important to expand the process to cover all VA employees,” Miller said. “If you can show me an agency that is more messed up than VA, I’d like to see it.”

Opponents see the language as overly broad and a threat to government employees’ due process rights, while proponents argue it’s far too difficult to fire VA employees. They also say it unfairly creates special rules for VA employees. Miller said he’d like to expand the rules to all federal employees.

“Civil service laws need to be revised,” he said. “They are an imprediment to being able to hold employees accountable.”

While many conservatives had voiced support for the new bill, it got a recent boost from the Iraq and Afghanistan Veterans of America, the largest post-9/11 veterans group, and the Veterans of Foreign Wars, which represents 1.4 million veterans across the country.

“Our membership, they are frustrated that they see bad employees stay on in their roles with no accountability, and we saw this (bill) as an opportunity to give the (VA) secretary an opportunity to get rid of bad actors,” VFW Legislative Director Ray Kelley said.

Perhaps indicating the bill is gaining momentum, the White House issued a statement Tuesday opposing the bill, saying if it were to come to the president’s desk, “his senior advisors would recommend that he veto the bill.”

“The bill could have a significant impact on VA’s ability to retain and recruit qualified professionals and may result in a loss of qualified and capable staff to other government agencies or the private sector,” the statement says.

Veterans groups, lawmakers from both sides of the aisle and union leaders have generally been in agreement about the need to clean house at the VA and protect whistleblowers, many of whom report retaliation. During several hearings in front of Miller’s committee, VA officials have been in one corner facing harsh questions or criticism from just about everyone in the room.

Miller, a conservative lawmaker whose committee has become a media darling through the gripping testimony of abused VA employees, has also had friendly interactions with union leaders, whose testimony he has used to highlight abuse of whistleblowers.

That goodwill seemed to be fizzling Wednesday.

Cox said if Miller’s bill passes, it would affect rank and file VA employees, including whistleblowers, whom Cox said would be at even greater risk of retaliation.

“This is nothing more than to annihilate due process rights for employees at VA, and it would be the only federal agency that would deny those due process rights,” Cox said. Miller wants “a complete at-will workforce, fire on demand.”