Beyond the canteens: VFW knows it needs to change to stay relevant Buy Photo
Veterans of Foreign Wars Post 1 Quartermaster Tony Adams, podium, leads a session on how to attract younger members to the VFW at the organization's annual convention in Pittsburgh Tuesday. The VFW has had trouble making inroads among post-9/11 veterans. (Heath Druzin/Stars and Stripes)

Buy Photo
Veterans of Foreign Wars Post 1 Quartermaster Tony Adams, podium, leads a session on how to attract younger members to the VFW at the organization's annual convention in Pittsburgh Tuesday. The VFW has had trouble making inroads among post-9/11 veterans. (Heath Druzin/Stars and Stripes) 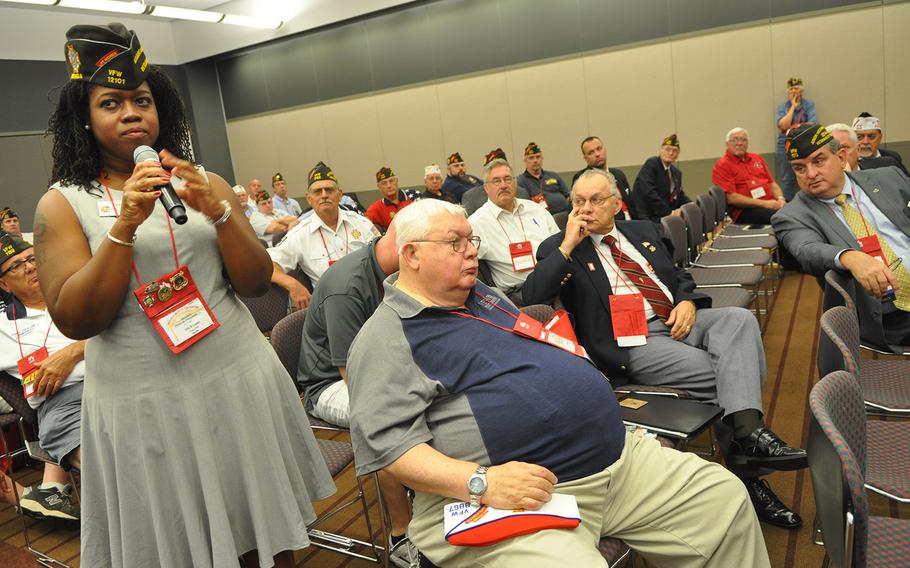 Buy Photo
A member of the Veterans of Foreign Wars asks a question during a session on how to attract young members. The VFW's membership has been declining for years as its members age. (Heath Druzin/Stars and Stripes) Buy Photo
Incoming Veterans of Foreign Wars Commander John Biedrzycki says he will focus on making changes that better attract post-9/11 veterans. The group has struggled to get younger veterans to join. (Heath Druzin/Stars and Stripes) 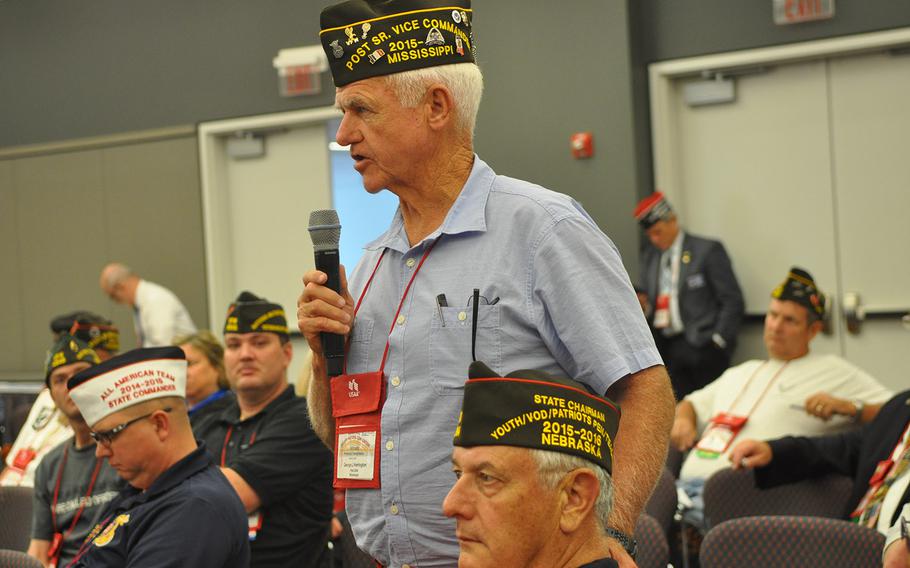 Buy Photo
A member of the Veterans of Foreign Wars asks a question during a session on how to attract young members. The VFW's membership has been declining for years as its members age. (Heath Druzin/Stars and Stripes)

PITTSBURGH — Change comes slowly for the Veterans of Foreign Wars, the venerable group that has been advocating for America’s veterans for more than 100 years.

It wasn’t until 1978 that the Veterans of Foreign Wars allowed women to join, and it took until December to change the wording in their charter referring to members from “men” to “veterans.” Just this week, the group voted to make its Ladies Auxiliary gender-neutral so spouses and families of female vets could be included.

At the organization’s annual convention in Pittsburgh this week, though, commanders and rank and file said they realize that resistance to change needs to change, or the shrinking organization could lose the newest generation of veterans and risk withering into obscurity.

“I’m a traditionalist, I’m a joiner,” said John Biedrzycki, 69, a former schoolteacher who, as the VFW’s incoming commander, will be tasked with persuading Iraq and Afghanistan veterans to join. “Young people today want to get their hands dirty, they want to get involved, they don’t want to sit in a meeting room all day, and that’s exciting.”

Over the decades, the VFW’s accomplishments have been many, including being instrumental in getting benefits that newer combat veterans still receive, such as the GI Bill. And with 1.4 million members, they’re still a force among veterans and on Capitol Hill, where they lobby for veterans issues and testify in front of congressional committees. It’s the reason President Barack Obama chose the group’s annual convention to deliver a speech Tuesday on foreign policy and veterans issues on the heels of the historic U.S.-Iran nuclear deal.

But the VFW has been losing members for years, as Vietnam veterans age and the number of World War II and Korean War vets dwindles.

Many younger veterans gravitate to newer groups, such as Iraq and Afghanistan Veterans of America, and groups with a niche, such as Team Red, White & Blue, which focuses on physical and social activities.

To reach younger veterans, it’s not enough for the VFW to rely on past victories, just as it’s certainly not enough to provide the dark canteens with dollar beer that so many people associate with the organization.

“Depressing dive bars with sad old alcoholics” is how 29-year-old Iraq veteran Brittany Bartges described them, while proudly wearing her own VFW cap and addressing a roomful of skeptical members mostly 30 years or more her senior.

Bartges is the senior vice commander of VFW Post 1 in Denver, the organization’s first and now one of its most cutting-edge posts. She and two other Post 1 cohorts gave a presentation Tuesday on how to attract younger members. A lot of faces in the audience scrunched up when Bartges, post commander Michael Mitchel and the post’s quartermaster, Tony Adams, explained the importance of a social media presence.

The Denver group is trying to redefine what a VFW post can be, with a slick website, online membership signup and yoga classes in a downtown storefront that doubles as an art gallery featuring vets’ artwork. They also got rid of their bar.

“How are you going to raise money without the canteen?” one audience member asked.

One suggestion: Pay more attention to the location of your hall and rent it out to others. Bartges and her cohorts stress they’re not trying to tell other posts to boot the booze or the bars, but said that young members need more. Outdoor activities, classes, art, even day care during meeting times — since the VFW is not just a boy’s club anymore.

Mitchel said that the number of post-9/11 veterans who have joined in Denver since the post started reaching out specifically to them has been dramatic. His post has worked with — instead of competed with — other veterans groups, especially those who excel at organizing activities and volunteer opportunities.

“Today’s generation of veterans do not want to sit at a bar,” he said. “They want to contribute to their community and their comrades.”

Despite the skepticism at the beginning and some raised eyebrows at the mention of yoga and mindfulness, many of the older veterans in the audience said they took the message to heart. Vietnam veterans, especially, still feel the sting of the chilly reception they received from their World War II forebears and said they are committed to avoiding that scenario with those who fought in Iraq and Afghanistan.

“We do not want them to have the same experience we had,” Vietnam veteran James Weaver said.

Robert Barquist, 68, another Vietnam veteran in the audience, said the VFW is not serving all veterans like it should and applauded the Denver post for trying to be inclusive.

Biedrzycki, a Vietnam veteran, said members of his generation have to listen to those who served in Iraq and Afghanistan and learn to adapt to a veterans community that is changing as rapidly as the military, which has opened more positions to women and allows gay troops to serve openly. He said he’s seeing positive changes at his own local post outside of Pittsburgh.

“My own post, we have a young veteran as our quartermaster — we now have Wi-Fi,” he said. “We should have done that a long time ago.”

Eventually, if the VFW is to continue to be a major voice for veterans, it’s going to have to be the younger generation that makes that happen, Biedrzycki said.

“We have an organization that we’re happy to pass down to them.”