This portion of the 24-mile Zellertalweg cuts through the vineyards in the hills between Monsheim and Moelsheim in the German state of Rheinland-Pfalz. (Jennifer H. Svan/Stars and Stripes)

This portion of the 24-mile Zellertalweg cuts through the vineyards in the hills between Monsheim and Moelsheim in the German state of Rheinland-Pfalz. (Jennifer H. Svan/Stars and Stripes) 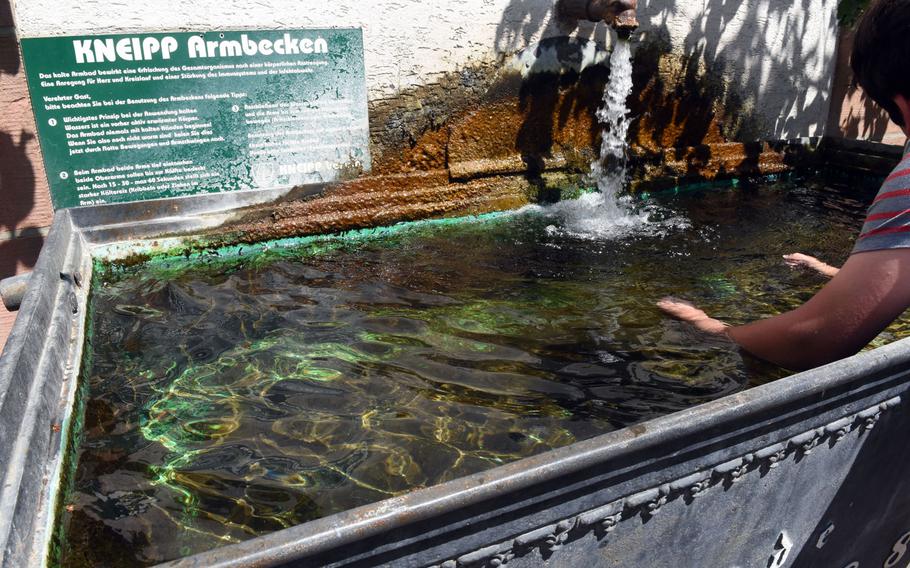 Hikers and cyclists can stop at this cold-water arm basin in Moelsheim, Germany, to re-energize. The village is along the Zellertalweg, a 24-mile hiking trail through the Zell valley wine region in Rheinland-Pfalz. (Jennifer H. Svan/Stars and Stripes) 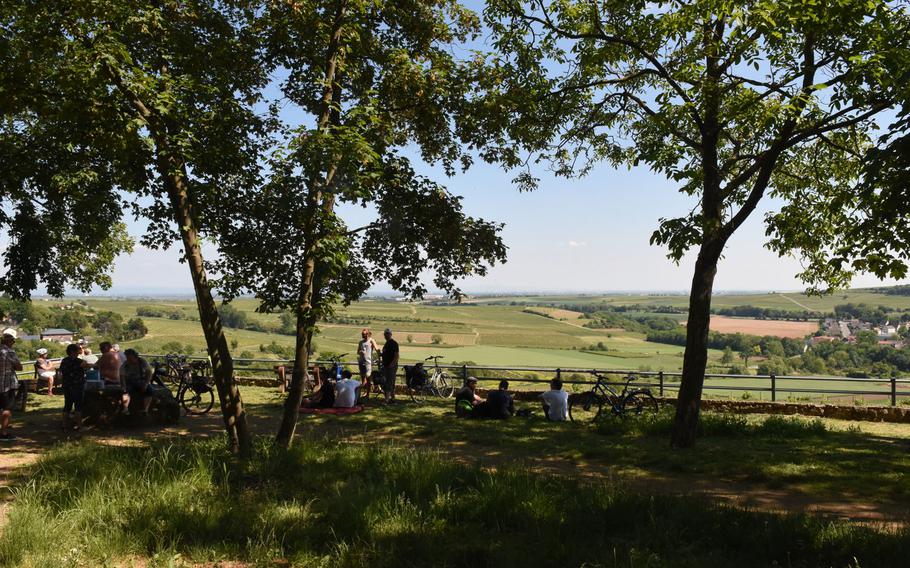 Hikers rest and enjoy the panaromic view at the ''wine rest with a view'' in Moelsheim, a quaint wine village along the Zellertalweg trail in Rheinland-Pfalz, Germany. (Jennifer H. Svan/Stars and Stripes) 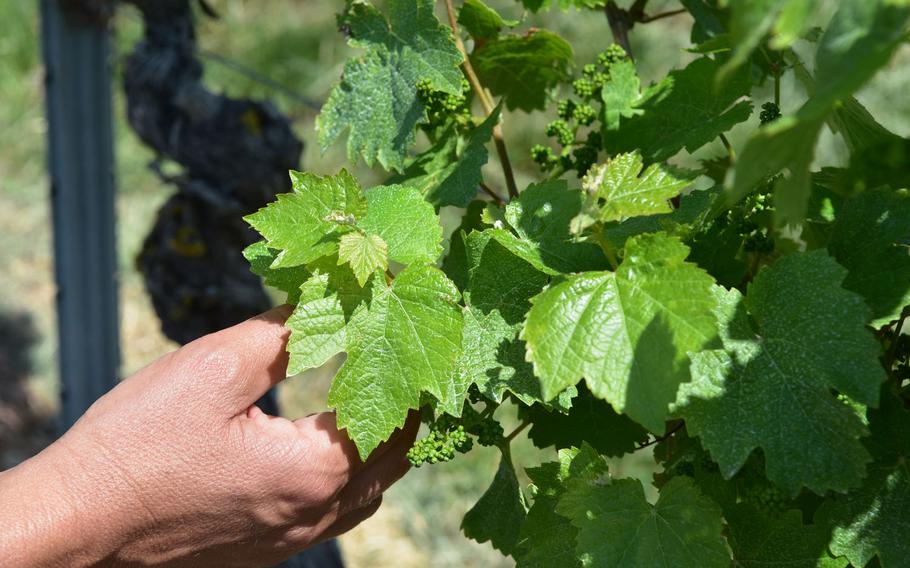 Young grapes begin to show in the vineyards in the Zell valley in Rheinland-Pfalz. It's the only area in Germany that combines two-wine growing regions - Palatine and Rheinhessen - and boasts more than a dozen vineyards. (Jennifer H. Svan/Stars and Stripes) 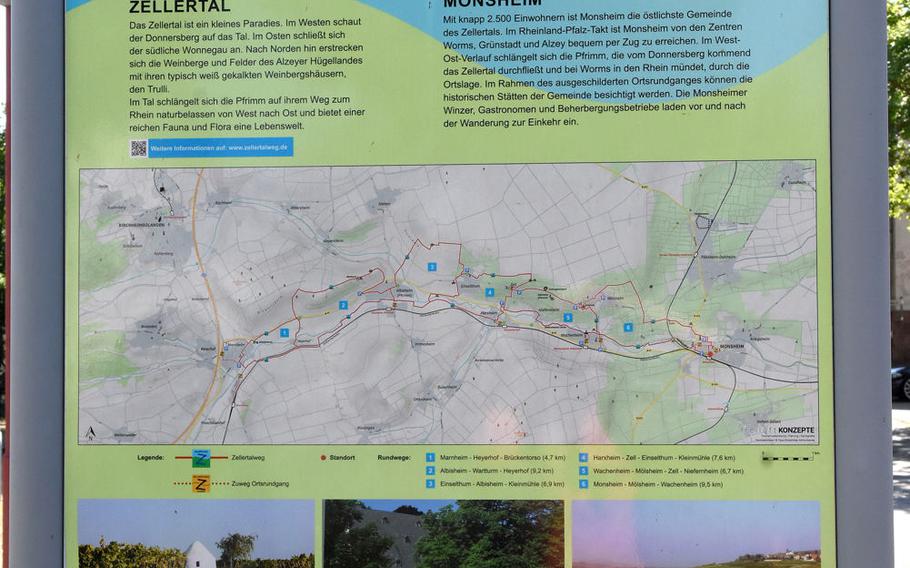 A sign posted in Monsheim, Germany, shows the route of the Zellertalweg, a series of connecting trails that winds 24 miles through the Zell wine-growing region in Rheinland-Pfalz. (Jennifer H. Svan/Stars and Stripes) A hut along the Zellertalweg trail in the Zell valley advertises a local wine delivery service. Call the number and wine will be delivered in minutes. (Jennifer H. Svan/Stars and Stripes)

Lying on a wooden bench in a park with a panoramic view of the Rhine valley, I closed my eyes and dozed off.

A friend and I, along with my 9-year-old son, had found the best rest spot in the Zellertal, or Zell valley, nestled at the northern end of the Palatine wine region and less than an hour’s drive from Kaiserslautern.

After hiking through vineyards under a withering sun and sharing a bottle of local wine — grape juice for my son — I was too drowsy to take in the views or care about napping in public.

The Zellertal connects the region between Worms in the east and Donnersberg in the Palatinate, and is the only valley in Germany that combines two wine-growing regions, the Palatine and Rheinhessen. It hosts more than a dozen vineyards.

The bench where we stopped to rest was on the outskirts of Moelsheim, one of a string of quaint wine villages along the Zellertalweg, a series of connecting trails that traverse the valley for 24 miles through the hilly vineyards and on flatter ground along the Pfrimm, a tributary of the Rhine River.

The well-marked trail, which opened in March 2016, can be divided into six stages, with the longest circuit about six miles. We started our route at Monsheim, considered the eastern gateway to the Zellertal, and hiked part of a 5.9-mile circuit that cuts through the vineyards between Monsheim and Moelsheim before circling back along the Pfrimm River past Wachenheim.

The views were spectacular, but it was the unexpected that made the hike memorable — things like dialing a number for a local winery that was posted on the side of a hut on the trail, and having a bottle of wine, grape juice and bubbly water delivered to where we were in less than 10 minutes for under 20 euros (about $23).

In the center of Moelsheim, we found a Kneipp “arm basin” — a trough of cold water that passersby can submerge their arms in, said to be restorative and energizing. The winner of our contest to see who could keep their forearms in the icy water the longest, toughed it out for more than five minutes.

Although it was closed the day we went, we learned that, at the bench with a view — officially called a “wine rest”— there’s a stand, on Sundays and public holidays, that serves Palatine and Rheinhessen wines from the Zell valley. It’s open on those days until October.

We ended our day back at Monsheim, where we had parked for free at the lot next to the train station. For those who don’t want to drive, there are train and bus stations along the Zellertalweg.

DIRECTIONS: The eastern side of the Zellertalweg can be accessed at Monsheim, a village near Worms and less than an hour’s drive from Kaiserslautern. There is parking next to the train station. GPS coordinates for the station: Germany, Rhineland-Palatinate, Monsheim, GPS: 49.6335,8.2082.

FOOD: There are numerous restaurants and wineries in villages along the trail.