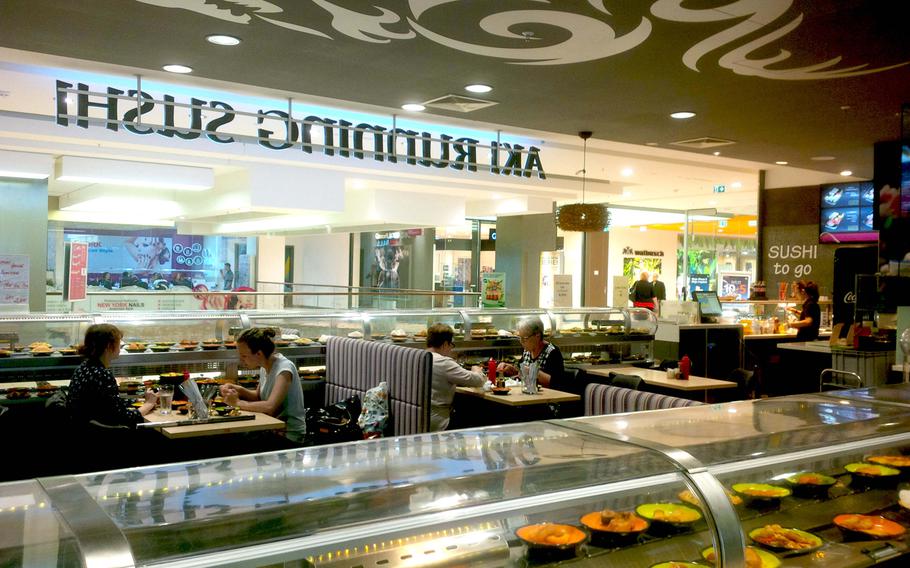 Conveyer sushi at Aki Running Sushi at K in Lautern in Kaiserslautern, Germany. For 8.90 euros ($10.50), you can gorge yourself on raw fish for 30 minutes. (Will Morris/Stars and Stripes)

Conveyer sushi at Aki Running Sushi at K in Lautern in Kaiserslautern, Germany. For 8.90 euros ($10.50), you can gorge yourself on raw fish for 30 minutes. (Will Morris/Stars and Stripes) Not all sushi is raw. Two classic options, cooked shrimp and cooked octopus, on offer at Aki Running Sushi, an all-you-can-eat sushi restaurant at K in Lautern in Kaiserslautern, Germany. (Will Morris/Stars and Stripes) A piece of salmon sushi as prepared by Aki Running Sushi. The restaurant, located at the mall in Kaiserslautern, Germany, offers a 30-minute all-you-can-eat special. (Will Morris/Stars and Stripes)

When I stepped into Aki Running Sushi, which is located at the K in Lautern, I had no idea what to expect. I’ve eaten sushi in cities all over the world, including Tokyo and Beirut, and I’ve even had kosher sushi in Jerusalem, but the thought of going to a mall and paying a flat fee to eat as much sushi as possible in a half-hour seemed like some form of culinary sacrilege or torture.

In reality, it wasn’t that bad, but just barely.

At a sushi bar you sit in front of a chef and watch as each piece is created in front of you like a work of art.

At sushi-go-rounds, the chef places sushi and other dishes on color-coded plates on a long conveyor belt that runs down the entire counter of the restaurant. Customers “order” by selecting sushi according to what they want and the color of the plate. The plate’s color corresponds to a pricing chart on the menu or posted to a wall. It might sound odd, but with lots of other people, it’s actually really fun.

Aki Running Sushi is a third type of sushi place, a “combat sushi” joint, if you will. Each patron sits next to a double-decker conveyor belt. A waitress comes over and offers you the option of a half-hour or a full-hour feeding session. Then she tells you the time you’re supposed to stop eating and slaps your check down on the table.

She should just fire a starter pistol.

The first thing you’ll notice after the waitress disappears is that there are good pieces of sushi on the conveyor belt, but they are few and far between. The second thing you realize is that everyone is looking out for the same pieces as you, and when someone gets a piece you are eyeing, you have to resist the urge to stand up and start swinging.

The last thing you’ll probably notice is that the belt moves awfully slowly, vastly diminishing the time you have to stuff things in your mouth. Not being a sucker, I solved the problem by grabbing several plates at once. Momma didn’t raise no fool.

As for the food itself, it’s OK. The usual suspects — your imitation crab rolls, your cooked sweet shrimp, your octopus, your salmon — are all there. If you have ever had sushi from the deli section of a grocery store, it’s about the same quality. It all hits the spot if you are craving sushi; just don’t expect anything fancy. But then again, it’s an all-you-can eat place, so why would you?