Barcis, Italy, offers uncrowded hiking trails and scenery at the foot of the Dolomites 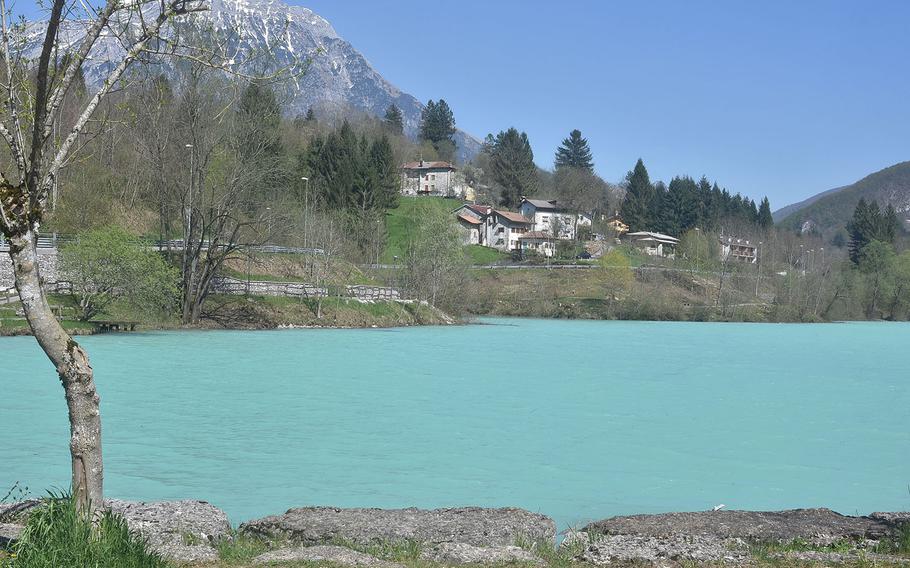 Buy Photo
Lake Barcis, a mountain lake about a half hour's drive from Aviano Air Base, is known for its turquoise-hued water. (Kent Harris/Stars and Stripes)

Buy Photo
Lake Barcis, a mountain lake about a half hour's drive from Aviano Air Base, is known for its turquoise-hued water. (Kent Harris/Stars and Stripes) 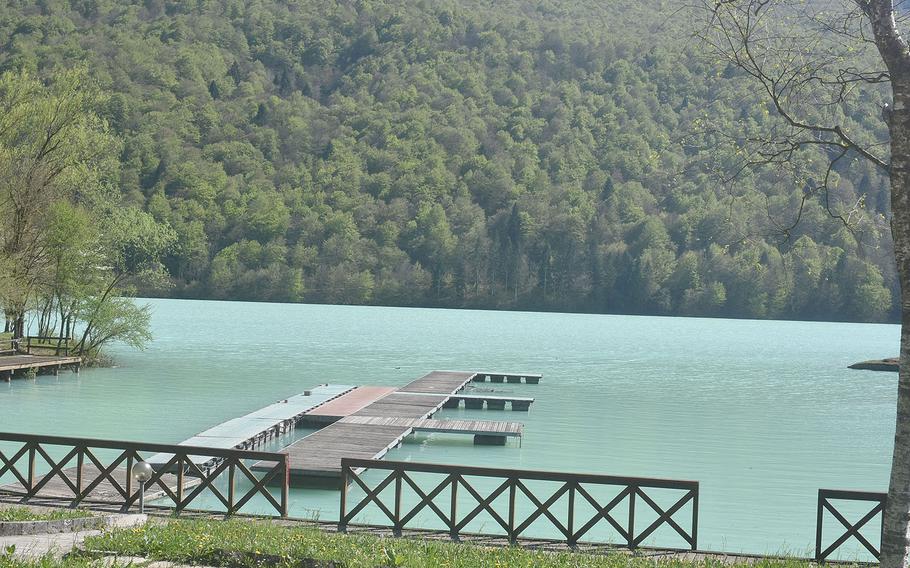 Buy Photo
There are a lot more trees around Lake Barcis than boats for most of the year. And the handful of piers around the lake are usually off-limits to visitors. (Kent Harris/Stars and Stripes) Buy Photo
It's not hard to find wildlife such as this swan during a trip to Lake Barcis. This guy was a bit aggressive in either searching for food or defending its territory. (Kent Harris/Stars and Stripes) Buy Photo
Ducks swim among the debris that lines the shores of Lake Barcis. Much appears to come from the surrounding trees, but combined with the murky water, it makes a swim a bit uninviting. (Kent Harris/Stars and Stripes) 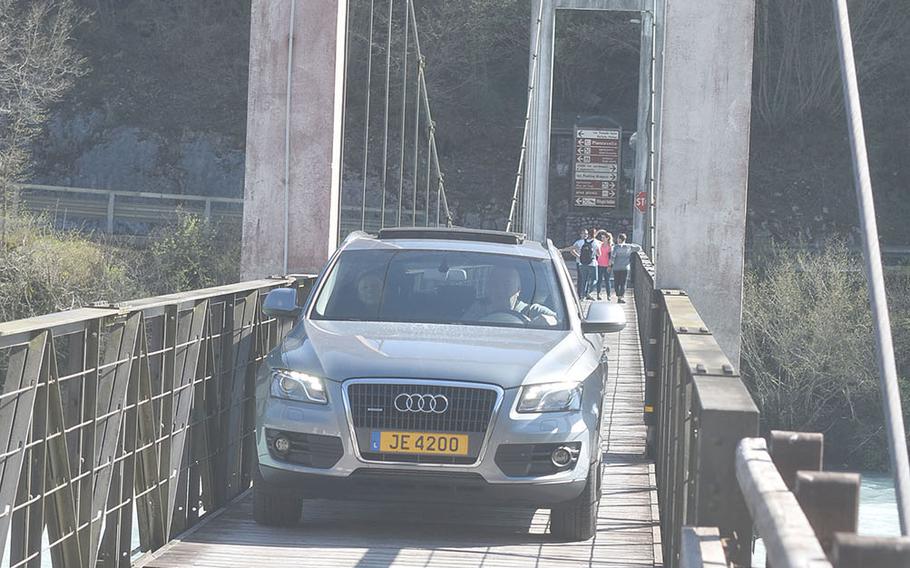 Buy Photo
This European-built car didn't have a lot of trouble navigating one of the narrow bridges around Lake Barcis. But many wider American-made cars would. (Kent Harris/Stars and Stripes) Buy Photo
Other than the wind creating some waves, much of Lake Barcis is fairly placid. That's not the case where the Cellina and Pentina rivers meet at the edge of the lake. (Kent Harris/Stars and Stripes) Buy Photo
The bell tower of the St. John the Baptist Church in Barcis looms over the rest of the town, which features a few shops, a few restaurants and other businesses targeting local residents. (Kent Harris/Stars and Stripes) 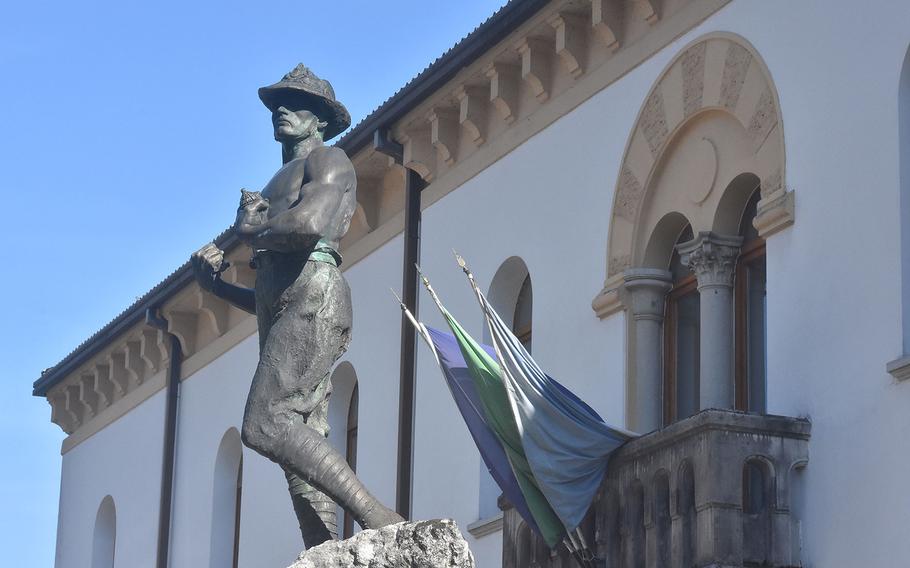 Buy Photo
Like most Italian towns of any size, Barcis has a memorial for all the men from the town who died in the world wars. (Kent Harris/Stars and Stripes) 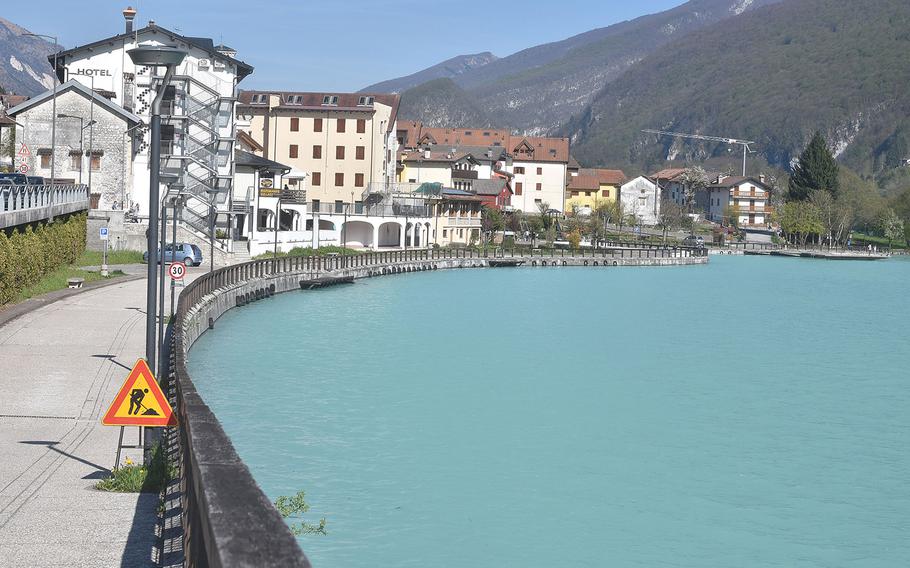 Buy Photo
Even during the busiest time of the year, the town of Barcis doesn't merit a lot of time from tourists. Only a few restaurants and shops would be of interest. But the lake it straddles is a definite attraction no matter the season. (Kent Harris/Stars and Stripes)

Spring has sprung in Northern Italy, and that means the mountain bikes and hiking boots have come out of storage.

For those in shape — or those who want to get in shape quickly (not recommended) — the Dolomites north and east of Aviano Air Base beckon. There are multiple spots that one could use as a base for such endeavors. But one of the prettiest is well-known to most of those based at Aviano: Lake Barcis.

Barcis, known for its turquoise-hued waters, is more than worth a visit in itself. There are almost two dozen marked hiking trails further up into the mountains and a handful of suggested mountain bike trails.

But if you’re into relaxation mode and would prefer a casual stroll along a pretty mountain lake, Barcis is hard to beat. Visit right now, and there’s hardly anyone else there. That changes in the summer, but even then, many Italians prefer to head to the beach than the mountains.

Don’t bother trying to get onto the lake when it’s not summer. Just about all the recreation services are closed. But the lake itself is probably best enjoyed from its shores anyway.

The lake is artificially formed and is the result of putting a dam near the convergence of two fast-flowing rivers — the Cellina and Pentina. There is some boating. And fishing. And swimming. But those seem like afterthoughts for much of the year.

It’s possible to walk all the way around the lake, but that would involve walking along roads that diverge from the water a bit on the south end. The town is on the north end, and there are good paths along almost all of the northern edge. It’s easy to spend a few hours walking along those paths. Numerous benches and tables are set up for picnickers, and there are several small playgrounds for kids. During much of the year, it’s possible to combine a trip to Barcis with the mountain resort town of Piancavallo, which is closer to Aviano. There’s a windy mountain road connecting them. To get to that road, though, you’ll have to navigate one of two bridges that span the lake. Both are narrow, but the one on the western end is not suitable for large vehicles.

DIRECTIONS: Lake Barcis is located in the Dolomite mountains, about a half-hour drive north of Aviano Air Base. The easiest way to get there from Aviano is to go through the industrial park and take the SR251 toward Montreale and head up the mountain to Barcis. Alternatively, there’s a small road (closed for part of the year due to snow) that connects Barcis to Piancavallo, which is easily accessible from Aviano.

TIMES: As long as the sun is up (and preferably out in force), it’s a good time to visit Barcis. Most shops take the long traditional Italian lunch off, and some are closed on Monday and Wednesday afternoons.

COSTS: It costs 60 euro cents an hour to park in one of the several lots around the town. Other than that, pack a picnic lunch, and a trip to Barcis can be very inexpensive.

FOOD: There are a handful of restaurants in the town. Many serve basics: sandwiches and snacks. There’s a wine bar and a few more upscale restaurants as well.