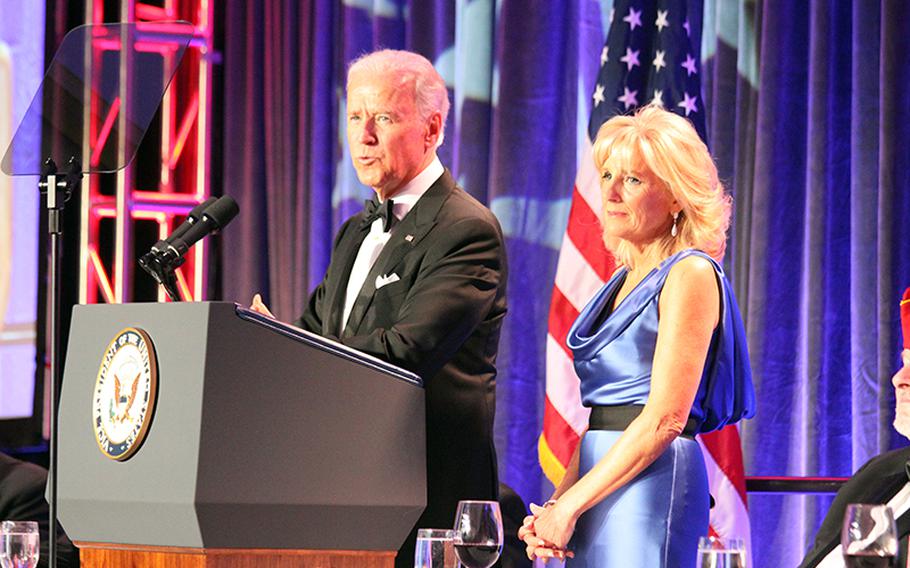 Vice President Joe Biden, along with his wife Dr. Jill Biden, address the audience gathered at the Salute to Heroes Inaugural Ball in Washington, on Monday, Jan. 21, 2013. (Amanda L. Boston/Stars and Stripes)

WASHINGTON -- While Pentagon leaders and the newest generation of war veterans were honored at the Commander in Chief inaugural ball Monday night, across the street veterans advocates hosted a celebration designed to highlight the heroism of past and present conflicts.

Twenty five of the 79 living Medal of Honor recipients attended the Salute to Heroes inaugural ball, the capstone of a weekend of celebrations dedicated to their small fraternity of troops. The event, sponsored by the American Legion, dates back to 1953, and in recent years has been designed to highlight not only those men’s stories of battlefield valor but also the service and sacrifice of troops overseas.

Earlier in the weekend, the Veterans of Foreign Wars held a reception for the men and honoring the Congressional Medal of Honor Society. On Sunday morning, AMVETS held a brunch for the group with Veterans Affairs Secretary Eric Shinseki as a guest of honor.

A dozen other veterans groups co-sponsored the festivities and paid tribute to the men. Organizers said they worry that despite the public’s appreciation for returning troops, too few Americans are aware of the extraordinary heroism that troops in every armed conflict have displayed.

“I think we just don’t hear enough about them,” said James Koutz, national commander of the American Legion. “If we can keep telling their stories, the public will hear more, and they’ll know more about the military.”

The celebration had all the glamour and glitz of the other inaugural events, but interspersed among the ball gowns and tuxedoes were the light-blue silk ribbons holding the military’s highest honor. Organizers traded a pop star performance for an address from NBC news anchor Tom Brokaw, who spoke of the historic weight and inspirational message of military service.

The Medal of Honor recipients said they understand the importance of sharing their stories, but also acknowledged that it isn’t an easy task.

“We don’t like to brag about ourselves, because we’re basically victims of circumstance,” said Alfred Rascon, who was awarded the medal for sacrificing his own body to shield a wounded soldier in Vietnam from multiple grenade blasts. “It’s not about me. It’s about all of our soldiers. I felt like I just did my job.”

Sgt. 1st Class Leroy Petry, who lost his right arm in Afghanistan while tossing a grenade away from his wounded comrades, said he prefers to talk about the other medal recipients, many of whom have not gotten the same recent publicity for their heroism as he has.

But he also added that he feels pride when he gets to discuss his fellow soldiers and their bravery when people ask about his award.

“The more I share their story, the lighter this medal gets on me,” he said.

President Barack Obama did not visit the Medal of Honor ball in 2009 or this year, making him the first commander in chief in five decades to miss the event. The move irritated some members of the crowd, who had hoped for a different outcome this time.

But Vice President Joe Biden did speak at the event, calling it a humbling experience to be standing before such distinguished war heroes.

He called the current generation of troops “the finest warriors the world has ever seen” and credited that to the service of the troops who came before them. He also promised that the current administration and future presidents would not forget their sacrifices.

“The entire country owes you,” he said. “Where your service ends, our obligation begins.