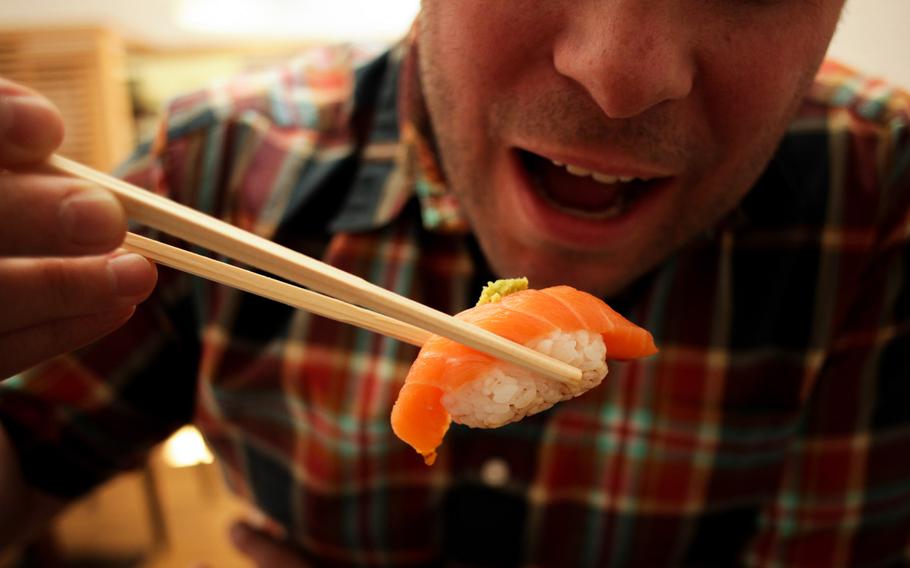 Buy Photo
Stars and Stripes photographer Joshua L. DeMotts gets ready to devour a piece of salmon nigiri sushi at Ayame, a Japanese restaurant in Kaiserslautern. (Matt Millham/Stars and Stripes) 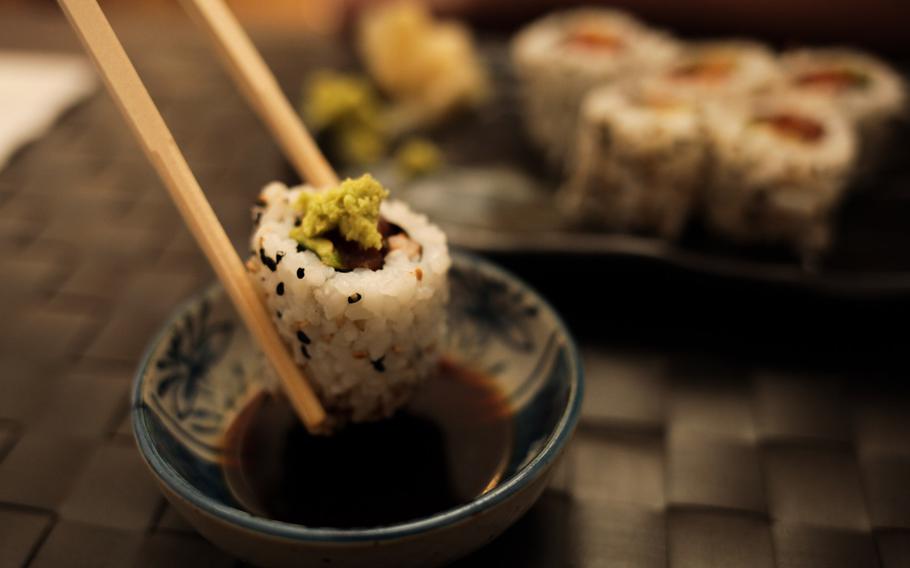 Buy Photo
A diner dips a piece of uramaki sushi with spicy tuna, avocado, cucumber and sesame into a tiny bowl of soy sauce at Ayami in Kaiserslautern, Germany. (Matt Millham/Stars and Stripes) Buy Photo
A plate of okonomiyaki, a type of savory Japanese pancake, with pork, kimchi and cheese, is an out-of-the-ordinary choice at Ayame Japanese restaurant in Kaiserslautern. (Matt Millham/Stars and Stripes) Buy Photo
The entrance to Ayame Japanese restaurant, located inside Kaiserslautern's Alcatraz Hotel, is difficult to find but worth the search. (Matt Millham/Stars and Stripes)

When it comes to finding something new to recommend to readers in Kaiserslautern, it sometimes seems there can’t be anything left worth mentioning.

With so many Americans swarming over this little city, it’s all but guaranteed that they’ve already found all the good restaurants, coffee shops and bars. And if they’ve found them, then it’s likely that they’ve recommended them to friends.

Inevitably, that knowledge should become part of the collective consciousness of the area’s expat community, which of course is stored in an underground bunker at Ramstein Air Base, where it’s safe from the prying eyes of German intelligence.

So imagine my surprise when I stumbled on a Japanese restaurant near the heart of downtown that nobody I know had heard about.

And that’s a real shame, because Ayame might be the best local sushi joint you’ve never tried.

Given that it’s buried deep in the bowels of a former prison, it’s safe to say not a lot of people just happen across Ayame. Even knowing the address, my dining companions and I had to do a little exploring to find it.

Go through the main entrance of the Alcatraz Hotel, bang an immediate right, walk to the end of the hall and take another right, walk down the hall, and you’ll find the cozy restaurant through a little door on the right.

The place is small, with seating for maybe 20 people. The kitchen sits at one end, open to the dining area, allowing you to watch the cooks prepare your meal.

Unlike Kahori, a popular American-friendly haunt that mass-produces sushi and sashimi for its scores of all-you-can-eat patrons, Ayame is a small-scale operation where you order by portion. The biggest difference between Ayame and its local competition, though, is quality.

While I’ve never had a reason to badmouth Kahori, it doesn’t give me a reason to gush. Ayame, though, served up the freshest, most flavorful sushi I’ve had in years, with moist, tender salmon and tuna that seem to melt in your mouth. The owners, a Japanese couple, recently returned from a trip back to their homeland, where they picked up some new techniques. Safe to say, they’re doing it right.

If you’re feeling brave, try their okonomiyaki, a savory Japanese spin on the pancake that is nothing like any pancake Fanny Farmer ever made (think shrimp, pork, kimchi and cheese). Their version comes from their native Osaka. It’s a somewhat decadent, eggy, sauce-covered departure from everything else on the menu.

The only downside, aside from needing a bigger stomach to enjoy everything Ayame offers, is that good food like this always seems to cost more. But in the end, it’s worth it.