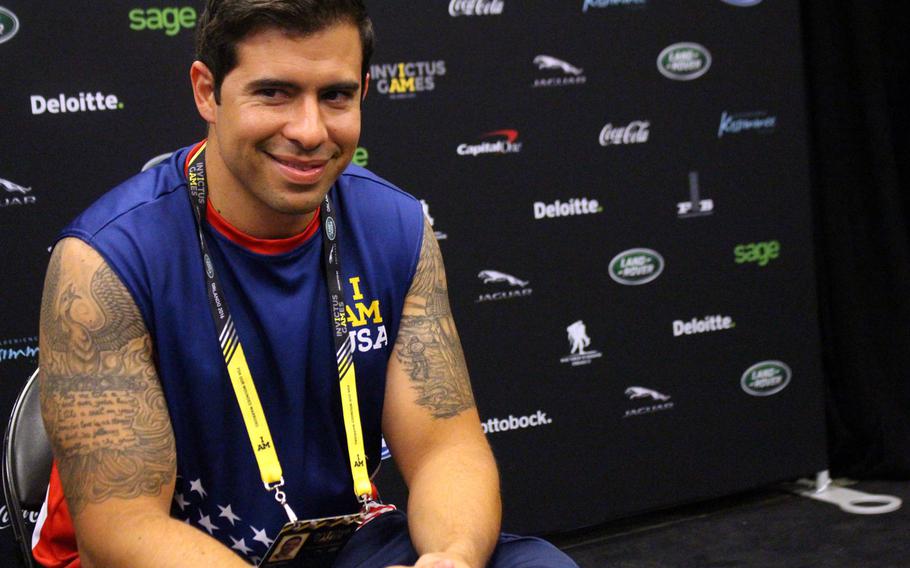 U.S. Air Force Staff Sgt. August O'Niell smiles as he recalls a story about his friends called the "Pineapple's." O'Niell along with six other servicemen formed the "Pineapple" group as a means for support. (Ken-Yon Hardy/Stars and Stripes)

U.S. Air Force Staff Sgt. August O'Niell smiles as he recalls a story about his friends called the "Pineapple's." O'Niell along with six other servicemen formed the "Pineapple" group as a means for support. (Ken-Yon Hardy/Stars and Stripes) 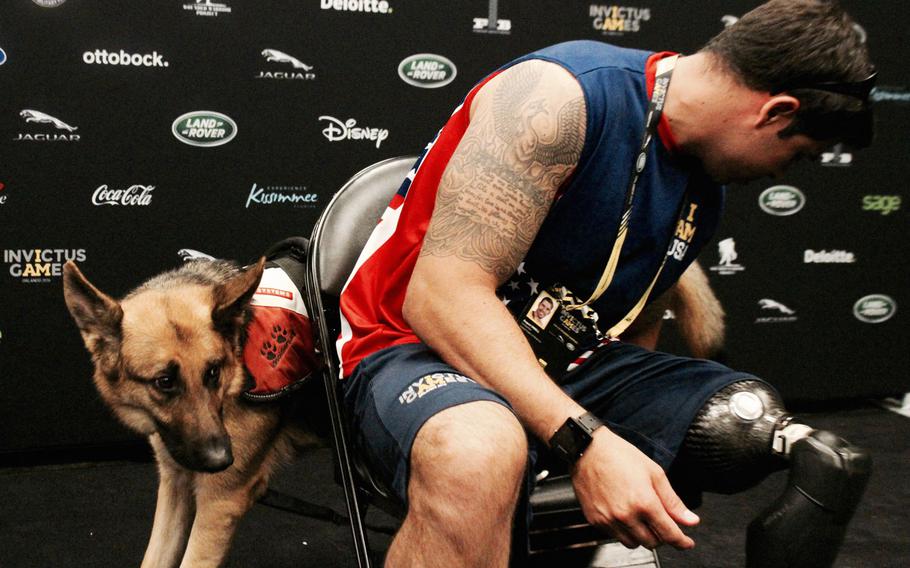 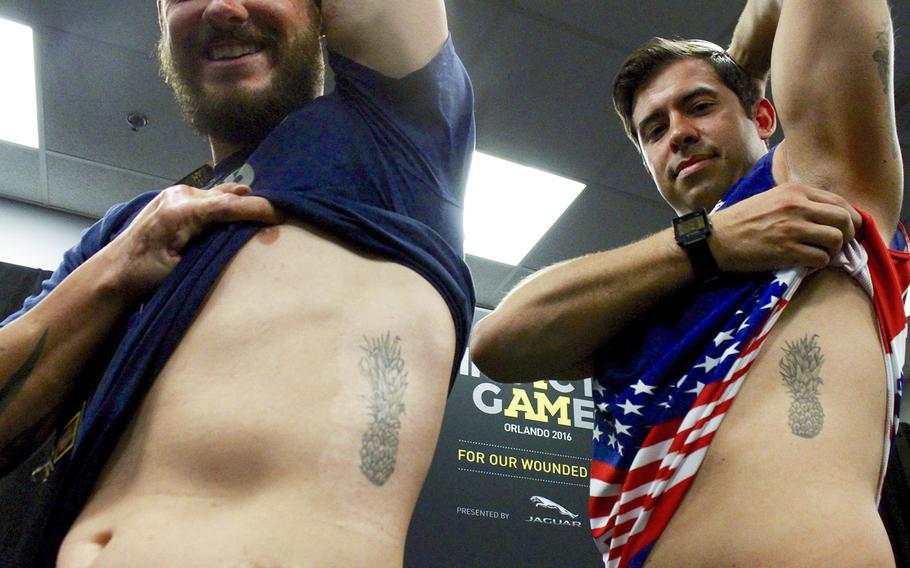 U.S. Air Force Tech Sgt. Leonard Anderson and Staff Sgt. August O'Niell show off their "Pineapple" tattoos. The two, along with five other wounded servicemen, formed the "Pineapple" group as a means for support. (Ken-Yon Hardy/Stars and Stripes) 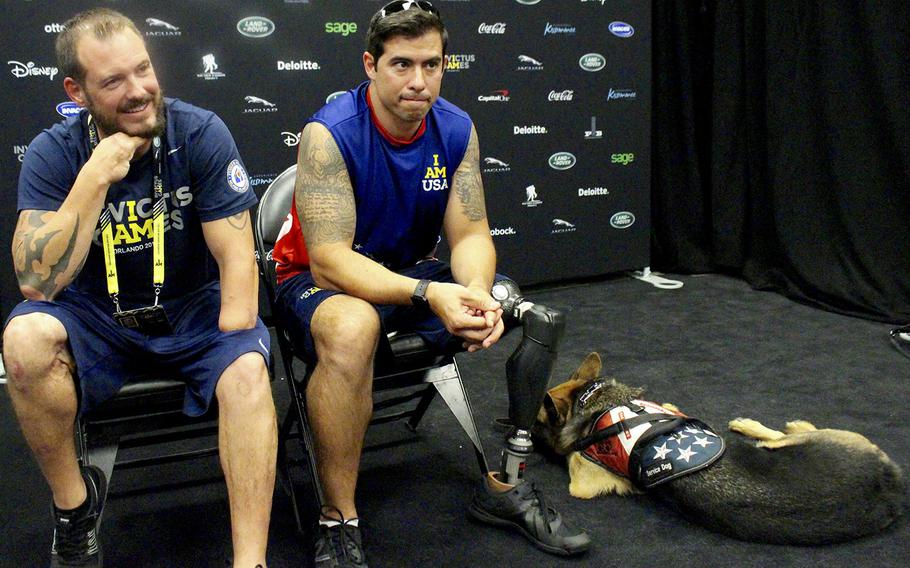 At the 2016 Invictus Game in Orlando, Fla., U.S. Air Force Tech Sgt. Leonard Anderson, left, and Staff Sgt. August O'Niell talk about the importance of helping each other. The two San Antonio residents, along with five other wounded servicemen, formed a group called "Pineapples" as a means for support. (Ken-Yon Hardy/Stars and Stripes) 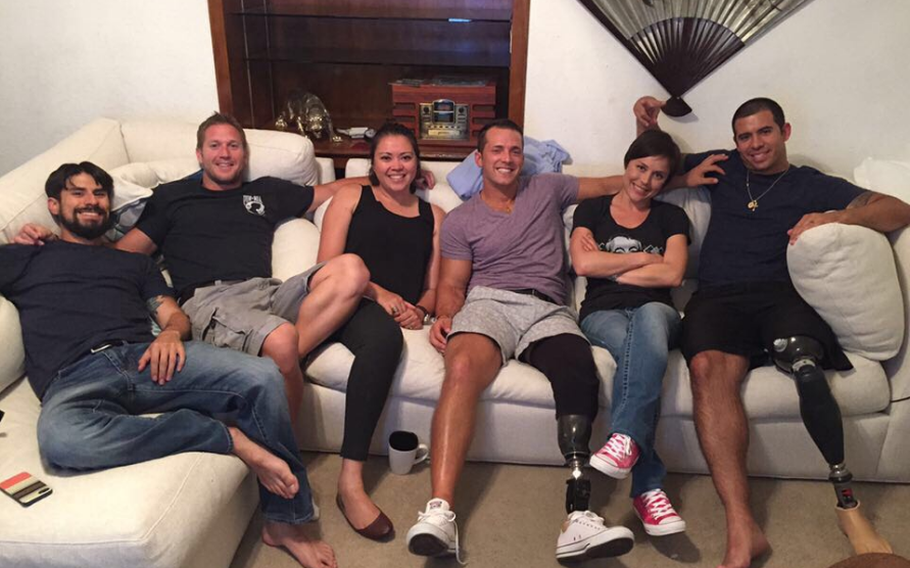 ORLANDO, Fla. — They didn’t know each other when one was blown up and the other was shot a year apart in southern Afghanistan.

By the time they met at a wounded warrior competition, retired Air Force Tech Sgt. Leonard Anderson was missing one arm below the elbow and all but one finger on his other hand. Air Force Staff Sgt. August O'Niell had endured at least a dozen surgeries.

Their lives have intertwined ever since.

They train and compete together. Anderson was there for O'Niell’s leg amputation and again when his daughter was born. O'Niell was there when Anderson, missing his hands, had no choice but to retire from the Air Force.

And when Anderson prepares for the swimming finals at the Invictus Games on Wednesday, his buddy will be there to help him to pull on his Speedo.

Their friendship is the story of these warrior games, where the fierce determination needed to get here comes with a disarming vulnerability. That’s a tough pill to swallow for these guys, but it forges deep friendships and a camaraderie among competitors like none other in the world.

“Me and him have gotten really close,” Anderson said Monday at the ESPN Wide World of Sports Complex at Disney World, where the games for wounded and ill warriors are taking place. “I’ve had surgeries over the years, and he’s had to basically bathe me.”

“You gotta get real close,” O'Niell said with a laugh.

The two men are part of a bigger support group among the Air Force team that developed through these competitions. Four were combat-wounded, two survived cancer and one had a motorcycle accident; they bonded over the resolve that drew each of them to adaptive sports.

The friendship evolved, solidifying three years ago during games in Hawaii, when they started doing things together and looking after each other. After sharing a pineapple at a luau, the tight circle dubbed themselves “The Pineapples.”

“We have had a running group text conversation for three years now that has never had an empty day,” O'Niell said. “All of us have pushed through and are now branching out into the world after our injuries or illnesses and are living — not just surviving. ... And we use each other to do that. If we ever have rough days, we can turn to each other or use the group message to just talk to each other. It’s a group of friends I would never change,” he said.

O'Niell was a pararescue airman in the southern Helmand province of Afghanistan, when in July 2011, just days after he’d signed up to re-enlist, his helicopter took fire.

A bullet ricocheted off the door and shattered his left knee, then exited and continued into his right calf, breaking his tibia.

He was flown to Kandahar, then Bagram, and he insisted that his re-enlistment paperwork was in order before he allowed himself to be evacuated to Landstuhl Regional Medical Center in Germany. There, his brother, a combat rescue officer, was waiting for him and was able to swear O'Niell in at his bedside before he was transferred to the United States.

O'Niell spent a few months in the hospital and returned frequently for knee surgeries. He had taken up seated volleyball and swimming when he went in for a knee replacement in 2014.

But surgeons found too much scar tissue. They said they could replace the knee and stop his pain, but he’d never have the use of it he wanted. So he told them cut it off.

“Great decision,” he said. “I was just done having to deal with pain 24 hours a day and not being able to sleep more than two hours a night,” and walking with a cane or crutches.

Adjusting to not having a leg was challenging. Adjusting to how much he had changed took him more by surprise. Dark days became darker; depression was debilitating at times.

Things were harder than they used to be. Getting out of the house became a challenge. It was easier to sit on the sofa and watch TV than go through the steps to put on his artificial leg — washing the liner, applying alcohol. The lazy days, he said, were more depressing than getting out.

“Being injured has brought a whole new mental aspect of life,” said O'Niell, 31. “Things are different. You have to find a new normal. That’s kind of what everybody here is preaching — finding a new normal.”

The games, he said, have given him reason to push harder, to get out and train. He and Anderson live in San Antonio, Texas. They trained together for the Invictus Games and pushed each other.

“I am going to keep pushing for as long as I am able to,” said O'Niell, who is competing in seated volleyball. “I am not going to quit what I love to do just because I have an injury.”

The same holds true for his friends. He won’t let them stop either. “I am going to be the person to push my friends to continue doing what they love and continue pushing forward in their lives, and I hope they do the same for me.”

Anderson stepped on a roadside bomb in the southern Kandahar province of Afghanistan in July 2012. He was a dog handler on a mission into a nearby village.

The blast destroyed his hands, shredded his legs and tore through his femoral artery, nearly killing him.

His left hand was so badly mangled that he elected to have it amputated below the elbow. He lost all but one finger on his right hand and it has very little function.

There was so much muscle damage to his legs that the doctors treated the injuries like burns. He lost feeling in about 50 percent of his legs, where they are patched, and he has a problem with lactic acid buildup. But he can use them.

He had a vein taken from his shoulder to put in his left leg, leaving him with limited circulation. Sometimes he gets so cold he can’t stop shivering. Other times, he sweats uncontrollably.

But none of that stopped him from hopping up to stand next O'Niell as they pulled up their shirts to show off the pineapple tattoos on their chests, under their left arms.

Every member of the Pineapples has one. And they all used the same template. It’s like a branding, a group of survivors who won’t quit.

They are exclusive, but they’ve been known to agree on a new member. They’ve drawn up a list of criteria for passing on the template, Anderson said. “I mean, ultimately, you gotta fit — you know, mentally.”

“It’s not that we exclude anyone,” O'Niell said. “It’s not like we just sit in our little group and we don’t talk to anyone else. It’s just like, we know when it comes to serious stuff, this is who we go to.”

The criteria: They all have to agree that the person is a Pineapple. And if you are going to get the tattoo, you have to get the template from someone who has one and he has to go with you. “No making up your own pineapple,” O'Niell said.

They’ve also come up with a puzzle box to house the template, said Anderson, 32. To get the tattoo, you have to figure out the puzzle. “If it takes a year, then it takes you a year.”

But the big thing is the mental fit. Anderson, who said he wakes up every day to a body so stiff it hurts, made it into the finals in the swimming competition, where he’s up against Paralympic competitors.

He has two young children who live with their mother in Illinois, and his face washed over in pain when he spoke of them not being here to cheer him on.

“I want the kids to look up to me and understand all of this,” he said. He wanted them to understand what it means to be not just a combat vet, but a wounded competitor. “I want to be extraordinary to my kids.”

“It’s not just about competing against each other,” O'Niell said. “It’s what the competition and the training and the camaraderie does for us.”

It’s also about what being injured has taught them, Anderson said.

“Guys like us, we are not good at being vulnerable and needing someone,” he said. “And that’s one of the big things we learn through a lot of this ... you really don’t have a choice.”

So when he gets his patched-up body out of bed Wednesday and focuses his mind on the competition, he will turn to O'Niell and not even ask the question.