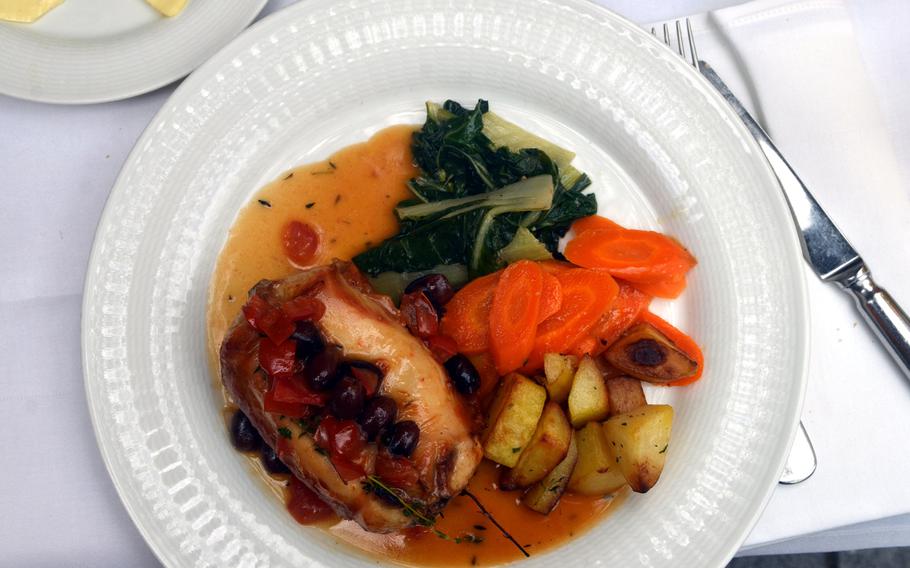 Buy Photo
A rack of rabbit with white wine sauce, black olives and thyme at Gregorelli's in Frankfurt, Germany. The entree also came with spinach, carrots and roasted potatoes. (David Edge/Stars and Stripes)

There are plenty of Italian restaurants scattered around Frankfurt, but oddly, not too many in the city’s central area. So if you get a sudden craving for some Italian after touring the city, Gregorelli’s would be a prime candidate.

The upscale restaurant, about 30 minutes from the Army’s Hainerberg area in the heart of the Frankfurt shopping district, appeared to be a popular choice for locals and visitors alike.

The drink menu is extensive, with more than 20 wines from all over Italy. The beer selections are mostly German but there are a few Italian ones to choose from as well.

Because of the coronavirus restrictions imposed by the German state of Hessen, seating was outside-only when I went there for lunch with a friend in June.

We opted not to get appetizers, but the bread that was brought to our table was hard.

I ordered the rack of rabbit in white wine sauce with black olives and thyme. My plate also came with carrots, spinach and roasted potatoes. The sides were all good, but I couldn’t eat the rabbit because it was undercooked. The server did offer to replace my food, but I declined because once I saw the blood coming out, I lost my appetite.

My companion ordered some excellent lamb chops, which came with the same sides that were on my plate. The chops were seared on the outside, medium-rare within and well-seasoned with rosemary, garlic, salt and pepper.

The food at Gregorelli’s is a little pricey, like others of its class in the city center. Our meals and wine came to 65 euros, though it was presented by servers who were very attentive, without being annoying. I could have used a little more salt on the food that I did eat, but I usually feel that way when I’m eating in Germany.

While the menu selection was impressive, I have no plans to eat at Gregorelli’s again. Maybe there’s a pasta dish or two among the dozens that I’d like, but the undercooked rabbit — and trying to charge me for it — means I’ll be looking elsewhere next time I’m downtown in the city.

Prices: Starters were 8 to 14 euros, main courses were 15 to 35 euros, and desserts were around 7 euros. Credit cards accepted.

Menu: German with English description under each item

Information and to reserve: www.gregorellis.de. The website is in German.