As Venezuela crisis deepens, military leaders say ‘all options are on the table’ 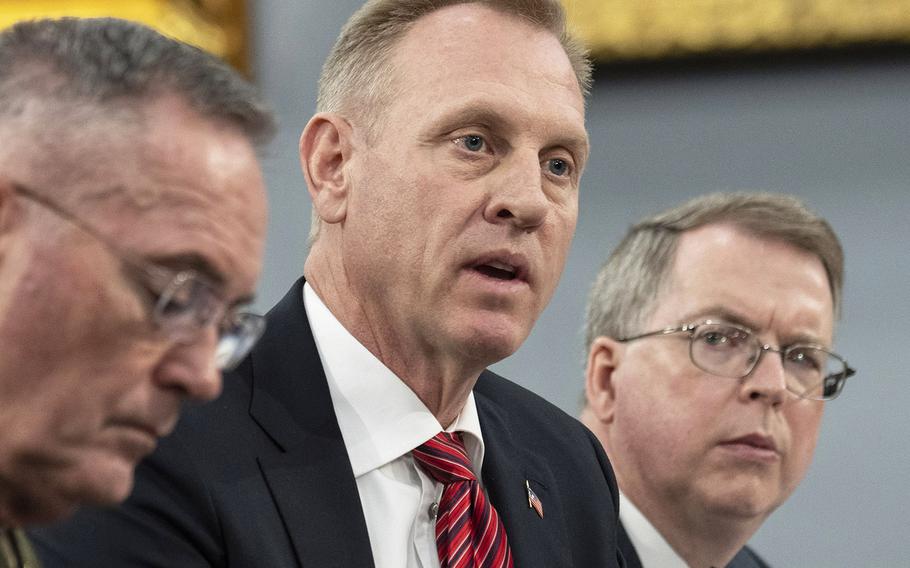 Buy Photo
Acting Secretary of Defense Patrick Shanahan testifies at a House Appropriations subcommittee hearing on the DOD budget on Capitol Hill in Washington on May 1, 2019. With him are Chairman of the Joint Chiefs of Staff Gen. Joseph Dunford, left, and DOD Comptroller David Norquist. (Joe Gromelski/Stars and Stripes)

Buy Photo
Acting Secretary of Defense Patrick Shanahan testifies at a House Appropriations subcommittee hearing on the DOD budget on Capitol Hill in Washington on May 1, 2019. With him are Chairman of the Joint Chiefs of Staff Gen. Joseph Dunford, left, and DOD Comptroller David Norquist. (Joe Gromelski/Stars and Stripes) 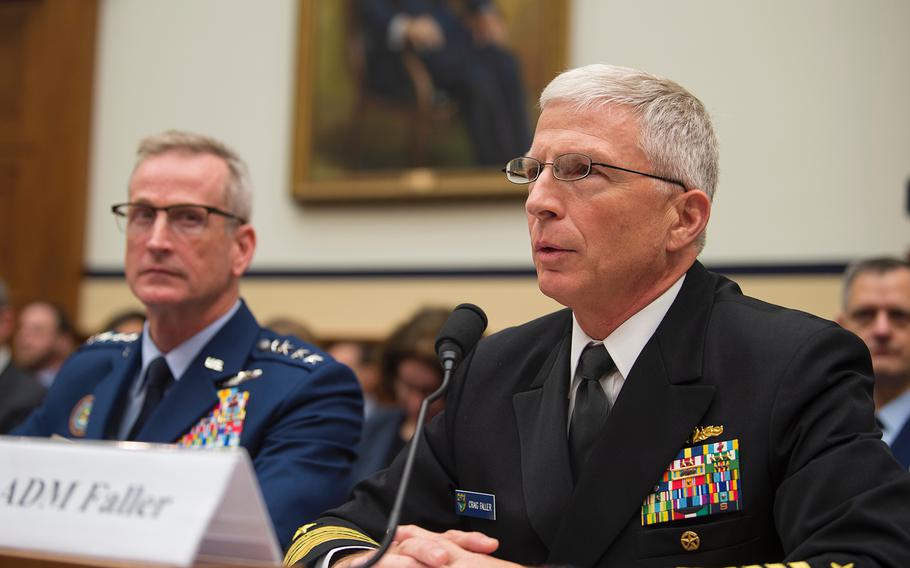 WASHINGTON — Pentagon leaders on Wednesday delivered a message to House lawmakers that U.S. military intervention is possible in Venezuela as the crisis in the South American country intensifies.

Acting Defense Secretary Pat Shanahan on Wednesday also made a last-minute decision to cancel a planned trip to Europe, citing the need to monitor the conditions in Venezuela, among other concerns.

Remaining in Washington would allow Shanahan to “coordinate with National Security Council and the State Department in Venezuela” better and also to work with the Department for Homeland Security on military support along the U.S.-Mexico border, Army Lt. Col. Joe Buccino, the acting secretary’s spokesman, said in a statement.

“It’s extraordinarily fluid. It’s almost day-to-day,” Shanahan said of the Venezuela situation during a congressional hearing. “When people say all options are on the table, they really are.”

On Tuesday, Venezuelan opposition leader Juan Guaido called for demonstrators to take to the streets to demand for the ouster of the government of President Nicolas Maduro. The demand was followed by violent encounters in the streets in the country’s capital city of Caracas between troops and demonstrators. By night’s end, Maduro claimed to have quashed an attempted coup.

Shanahan’s Capitol Hill testimony mirrored comments Wednesday by Secretary of State Mike Pompeo, who told Fox Business Network that “military action is possible” in Venezuela. Shanahan was slated to meet later Wednesday with Pompeo, Marine Gen. Joseph Dunford, chairman of the Joint Chiefs of Staff, and others on the Venezuela crisis.

Dunford, who also testified in the House alongside Shanahan on Wednesday, said the U.S. military was closely monitoring the ongoing situation.

“The president [Donald Trump] has made it clear that all options are on the table,” Dunford said, as he testified about the Pentagon’s fiscal year 2020 budget request to the House Appropriations Committee subpanel on defense issues. “The situation is a little bit unclear today from our perspective between Maduro and Guaido — Guaido being the legitimate member of the government. We’re doing what we can now to collect intelligence to make sure we have good visibility on what’s happening down in Venezuela and be prepared to support the president should he require more from the U.S. military.”

The comments came a day after Trump wrote on Twitter that he was closely monitoring the situation in Venezuela. On Tuesday, Trump and Vice President Mike Pence said the U.S. stands with the people of the embattled country.

Before Shanahan’s reversal on travel plans, he had been set for a trip across the Atlantic Ocean to attend change-of-command ceremonies for U.S. European Command on Thursday and NATO’s supreme commander on Friday — positions Air Force Gen. Tod Wolters will assume from retiring Army Gen. Curtis Scaparrotti.

Shanahan said that in terms of Venezuela, top leaders have done exhaustive planning and there’s not a scenario for which they don’t have a contingency plan. They are also working closely with Colombia and Brazil, taking a regional approach, he added.

“We’ve got the Cubans there, the Russians, the Chinese. Many dimensions … this is not a timetable we control,” Shanahan told House lawmakers. “To the degree we can respond, alter our tactics and take advantage of the situation, we will.”

Not far from Wednesday’s House Appropriations Committee subpanel hearing, another congressional panel also was raising questions about the military’s potential role in Venezuela.

Rep. Adam Smith, D-Wash., chairman of the House Armed Services Committee, told military leaders for U.S. Northern and Southern Commands for a hearing before his panel that there have to be limits to the roles that the military could play in Venezuela.

Adm. Craig S. Faller, commander of U.S. Southern Command, told Smith that the military continues to work with its regional partners and to support diplomacy efforts. He also said they are evaluating the potential evacuation of Americans in the face of increasing danger.

“Our leadership’s been clear, it has to be … a democratic transition,” Faller said, waving off Smith’s concerns. “We are in total support of diplomacy and we stand ready to support that effort.”