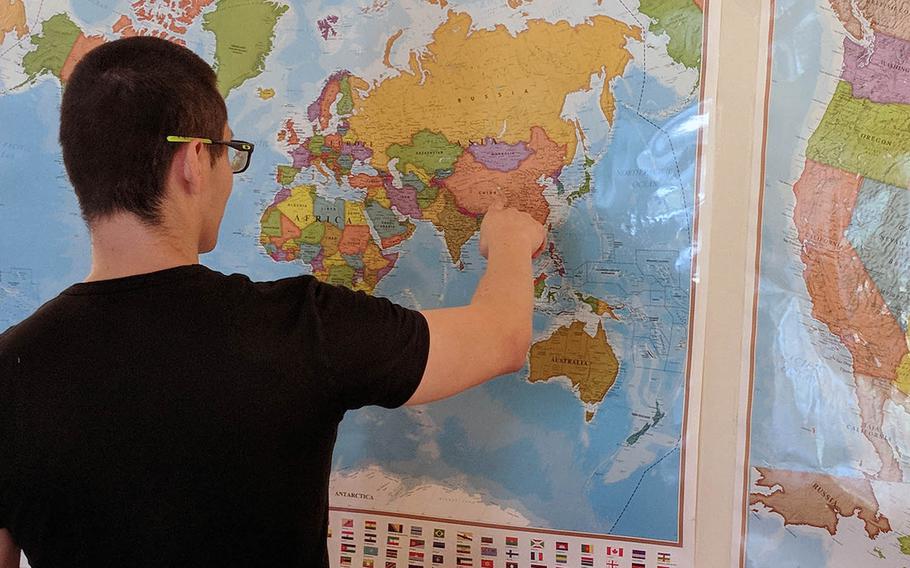 Luo Shu, a Chinese-born recruit into the U.S. Army, points to a map of the world hanging in his sparse apartment. Luo was arrested for deportation after his military contract expired because of an administration error, but the Army recently reinstated him. (Dianna Cahn/Stars and Stripes)

For the past 2½ years, the American system has tripped him up with obstacle after obstacle.

The China native, 29, signed a contract to join the U.S. Army – recruited for his knowledge and language skills – and then the rules changed. The military instituted new security screenings for foreign recruits that put Luo on a waiting list that was several years long, delaying his ship-out date again and again.

Then the Army neglected to extend his contract. It expired, along with his legal status in the U.S, and he was arrested this month by immigration authorities for deportation.

Knowing it meant he would be sent back to China, where he feared being prosecuted as a traitor, he held steadfastly to the belief that in America, right would prevail.

“I have to wait for justice,” he said earlier this week.

On Wednesday, after Stars and Stripes wrote about Luo and pressed the military for an explanation, that faith prevailed. Luo got a call informing him that the Army planned to reinstate him.

Marking time Since his son was born over three years ago, Luo has marked the passage of time with the boy’s adventure into childhood.

His son, whose name he wants to protect, was an infant when Luo began talking with Army recruiters in the fall of 2015. Luo had come to the U.S. on a student visa to earn a graduate degree in statistics at George Washington University. After graduating, he was a promising candidate for a military program for foreigners with language or medical skills that the Army lacked.

Luo was accepted into the Military Accessions for Vital National Interest, or MAVNI, and signed an Army contract in January 2016, as his son turned 1.

He knew he would never again be viewed as a loyal citizen in China. But he was OK with that. He liked the United States and its warm, outspoken people, and he was excited that the MAVNI program promised him expedited citizenship.

His wife, also a Chinese immigrant in the U.S. on a student visa, liked it here, too. Their son is American. And he wanted to serve.

“I’d like to (make) some contribution to this nation,” he said. “I’d like to make my son proud of me. Serving earns a lot of honor.”

He imagined a timeline in which he would ship out within six months, go through basic training and swear in as a new U.S. citizen by the end of his first year.

Instead, the military instituted new security clearance screenings for MAVNI recruits in summer 2016. Those screenings added to an already overwhelmed system, creating a backlog that will take years to clear. Luo, along with nearly 1,500 new MAVNI recruits, was stuck waiting.

In early 2017, as his son turned 2, Luo’s contract was extended for another year.

But his background checks were not complete. Each day, he’d work out, take his toddler to the playground and check to see whether anything had changed.

With the backlog creating havoc, the pilot program stopped recruiting and was not renewed – leaving about 10,000 MAVNI soldiers serving – and those waiting with signed contracts. Folks like Luo were advancing at a snail’s pace as the occasional screening was completed. With more than 1,400 MAVNI commitments set to expire, Congress pushed through a measure to allow the Secretary of Defense to extend their contracts for a third year.

Then Luo learned that he had been left off the list of people whose contracts were extended. He’d ticked the “Opt In” box to be included, but Army processing had put him on the “Opt Out” list.

Luo urged the Army to restore his contract, but he was told that he would have to appeal to the military records corrections board. He said he was told it would take at least a year. He applied for asylum. That too, could take a year or more.

He hired attorney Margaret Stock, a retired Army lieutenant colonel who was instrumental in creating the MAVNI program and ran it for several years, to represent him for a nominal fee. But the military machine was not swayed.

Last week, Luo got a notice from the Department of Homeland Security to come down to the Security Investigations office in Newark, N.J., where he was arrested for failing to maintain his visa status and remaining in the United States without proper authorization. He was sent home and ordered to appear in court in July to begin deportation proceedings.

“I never imagined I would get dragged down to this,” he said in an interview with Stars and Stripes on Tuesday.

Still, he had hope.

“I wait for justice,” he said. “I haven’t done anything wrong.”

Lessons from his fatherLuo grew up under China’s “one-child policy,” an only son to parents he described as calm and generous and who supported education. Both worked as nonteaching staff at a local college in his hometown and, like their neighbors, they were able to buy an apartment through the university.

It was a comfortable community where people knew each other’s names, he said. His parents took him to the playground and instilled in him a strong sense of learning. He was also surrounded by family. Despite the policy, his mother’s parents paid to have several children and Luo grew up with cousins. The extended family, including his grandparents, uncles and aunts and cousins, would get together every Sunday, on holidays and special occasions.

His father, an educated man with a major in physics, always took time to answer his son’s questions, Luo said. He taught him “the system behind things.”

For Luo, statistics was a natural progression – finding the hidden pattern behind the data.

His father also taught him about the world, buying Luo a globe when he was young.

But information was limited in China, and Luo grew curious.

Coming to the United States to study was not only a great adventure, but fed his appetite for knowledge about the world. Though it was difficult to leave his family, he said, America did not disappoint.

He found that people were helpful in his quest to navigate the cultural divide. He had to learn that no one in the United States knew what a W.C. was (a water closet, meaning a bathroom) and that there is an unspoken rule in Washington that if you plan to stand still on an escalator, stay to the right.

He said a nice woman in the supermarket taught him what “credit or debit?” was all about, since everyone pays with their phone in China.

Soon, he was ensconced. His English improved and he became a Golden State Warriors fan.

Mostly, he learned that people are open and free to say what they believe. And that museums are full historical accounts of people expressing themselves and demanding change.

This was the life he wanted to live.

After he was arrested, and deportation proceedings began, Luo could only shake his head.

“The people are nice, but the government doesn’t want me here,” he said.

Until he is naturalized, he can’t go to China to visit his family. He misses them so much.

The news The most recent conversation with a Stars and Stripes reporter took place in Luo’s apartment in central New Jersey. The apartment is sparsely furnished with a sofa, a chair, a table and a pile of toys.

For the past three weeks, Luo has puttered around the flat alone. His wife is traveling on a research project for her degree. Because Luo has no immigration status, he cannot get a driver’s license or legally work. With his limited mobility and unpredictable status, he and his wife felt it was best if she took their son with her.

Each afternoon, they talk using FaceTime. It reminds him of the void he feels and the uncertainty he’s been living with.

If Luo gets deported to China, he is certain that he will face persecution.

Human Rights Watch described in its 2017 World Report a “broad and sustained offensive on human rights” under the current Chinese regime. The report says pro-democracy activists are arrested and detained without representation, sometimes incommunicado, for months and tortured to extract confessions. It also accused China of tightening controls on the flow of information, being one of the “strictest online censorship regimes in the world,” with growing ideological control over education and mass media. Meanwhile, its rivalry with the west appears to be growing.

Luo grasps the irony. He swore allegiance to the United States, but when his contract expired, through no fault of his own, he was no longer viewed as the military’s concern.

Yet if he was sent back to China, he would be viewed as a traitor for signing on with the U.S. military.

“It’s crazy,” said Stock, his attorney, noting that that government was doing harm to national security by turning its back on the MAVNI program, which was created to help fill voids in understanding issues of national security.

“It’s also handing the Chinese a talking point,” she said. “‘Don’t join the U.S. government – look how they will treat you.’”

Luo was fearful – and frustrated. The plan had been to join the Army and naturalize, and his wife would be able to stay here. He was building a better life for his family. Then it turned into a mess, he said.

He couldn’t help but wonder if, instead, he’d signed away his future. Still, he’d stay as long as he could, hoping right would triumph.

Midway through this conversation, Luo’s phone rang. The caller identification said “Madame Stock.” She had news.

“They are not going to try to deport you after all,” she said.

‘Followed procedures’ Stock said she was first notified by Immigration and Customs Enforcement, or ICE, in a telephone call that they would not pursue deportation proceedings after all.

The next day, he got a call from the office of Sen. Cory Booker, D-N.J., telling him that the Army had changed his status. They still have not received anything in writing.

Last week, a Defense Department spokeswoman declined to comment saying that the MAVNI program is facing litigation – which is not relevant to Luo - and therefore it would not discuss a MAVNI case. She said that he was no longer under contract with the military, so it was an ICE issue.

On Thursday, the spokeswoman confirmed that Luo was being reinstated.

Luo “followed the procedures that he was given by the Army Recruiting Command,” Maj. Carla Gleason said. “He petitioned the Board of Military Corrections and his request was approved to reinstate him in the Delayed Entry Program.”

Stock, still cynical, said the decision was a good sign. She said there were three or four other MAVNIs who like Luo, had been left off the list, and were receiving similar reinstatements.

“I think it is good news,” she said. “It shows the power of the press because they weren’t going to do anything until it hit the news media.”

Luo, however, had no such withholdings. To him, this was simply vindication of right. And of his absolute faith in American democracy.

“You see?” Luo said with a big smile. “In the U.S. if you experience injustice, you get people behind you. I am a nobody here. I don’t have influential friends. I don’t have family here. Still, the system makes justice for me.”