Amid global worries over the coronavirus pandemic, some London attractions continue to receive visitors 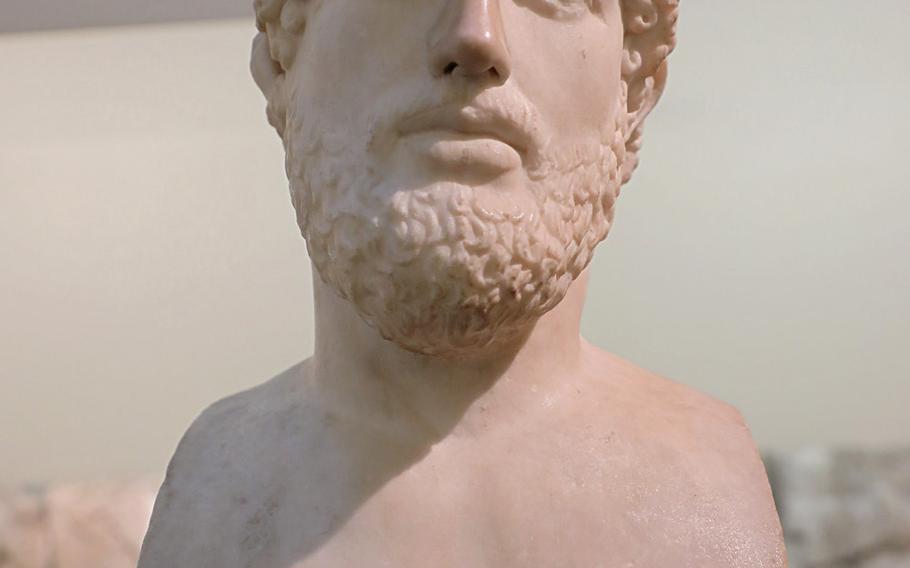 A second-century Roman copy of a Greek bust of Pericles, an Athenian statesman and general, at The British Museum in London. (Christopher Dennis/Stars and Stripes)

A second-century Roman copy of a Greek bust of Pericles, an Athenian statesman and general, at The British Museum in London. (Christopher Dennis/Stars and Stripes) Blue glazed shabtis, or mummiform figurines about 2 inches to a foot tall, of the high priests of Amun and members of their families at the British Museum in London, England. (Christopher Dennis/Stars and Stripes) The entrance to the British Museum in London, England. The museum has more than 60 exhibits that are free to enter but it temporarily closed its doors on Weds., March 18, 2020, because of the coronavirus. (Christopher Dennis/Stars and Stripes) 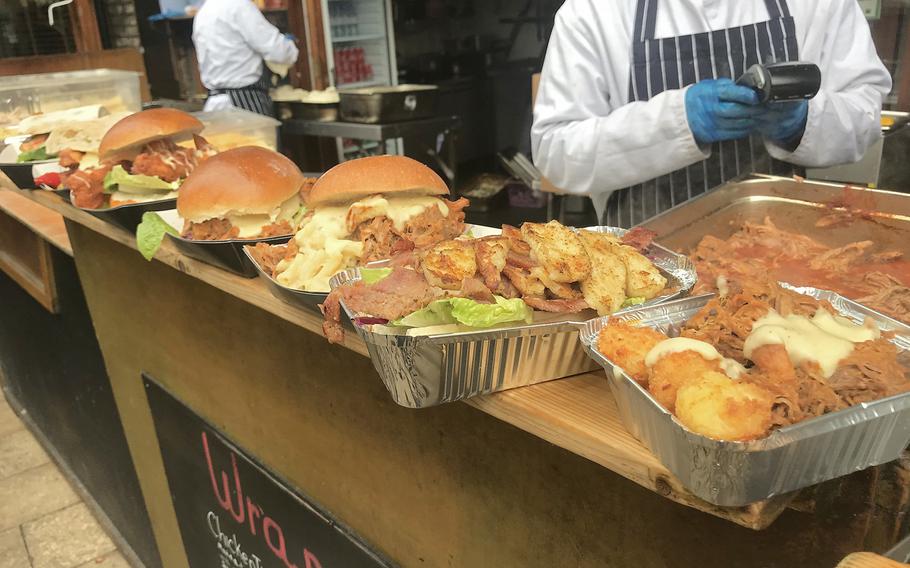 Some of the dishes found at Hash in Borough Market, south of the River Thames in London, England, near London Bridge station. The market was open as of mid-March during the coronavirus emergency, but communal seating has been removed, some workers are teleworking, and public events have been canceled. (Christopher Dennis/Stars and Stripes) A huge dish of paella awaits customers in Borough Market in south London. The market, located near London Bridge Tube station, is easily accessible by public transportation and foot. (Christopher Dennis/Stars and Stripes) The Monument, at the junction of Monument Street and Fish Street Hill in the City of London, is dedicated to the great fire of London of 1666 that burned for three days and destroyed much of the city. (Christopher Dennis/Stars and Stripes)

In times of coronavirus self-isolation when government officials are advising against nonessential travel and military leaders have restricted what service members can do off-base, a trip to London may seem out of the question.

But the coronavirus will pass, and even while it’s on top of us, many of London’s best attractions have tried to remain open to the public. Check the rules imposed by the British government and your chain of command, and be sure to wash your hands frequently and stand back from the next person gazing at that classic painting if you go. If you feel sick, stay home.

Air Force Col. Kurt. A Wendt, commander of the 501st Combat Support Wing, on Tuesday restricted travel inside the M25 — the ring road around London — for active duty members and civilians in the U.K. except for official duty, which pretty much rules out any day trips to London in the immediate future. In a video message, he “strongly encouraged our civilian family members to comply as well.”

When you can go, the perennial problem with London is that a visit usually comes with a big price tag. A round-trip train ticket from Mildenhall or nearby Bury St. Edmunds, for instance, is a whopping 43 pounds, or around $56.

But there are ways around that. I drive an hour and 20 minutes from Mildenhall to the London Underground station at Epping, east of London, park the car, hop on the Tube and ride into the city center. Transport for London has introduced enhanced cleaning methods for trains and buses during the coronavirus emergency.

An Oyster card, which will set you back 5 pounds, allows you to ride all public transportation in London and its suburbs, and can be purchased online or bought at train stations or visitor centers. You can add money to Oyster cards at refill stations located at the entrances to Tube stations. They take credit cards or cash.

Travelcards are another option for getting around. An off-peak pass covering zones 1 to 6 that you can start using after 9:30 a.m. costs 13.50 pounds. Epping is in Zone 6, and the places I wanted to go to are in Zone 1. Taking this option would have saved me another 3 pounds, but I got to Epping way before 9:30.

First, I headed to the British Museum, a 45-minute tube ride away. The museum has more than 60 galleries that are free to visit, with exhibits that will take you from Africa to ancient Greece, Syria and Egypt, and allow you to view the works of artists like French modernist painter Edouard Manet and post-impressionist Paul Cezanne.

The museum was open until mid-March but temporarily closed its doors on Wednesday.

After strolling around in the museum for several hours, I’d built up an appetite. I could have had a bite to eat at one of several cafes, a coffee lounge or two food trucks outside that offer reasonably priced meals. But I wanted to see a bit more of London, so I took a 20-minute Tube ride for 2.40 pounds that came off my Oyster card, got off at London Bridge station and walked to Borough Market (boroughmarket.org.uk), on the south bank of the Thames. The food choices at the market were dizzying — everything from gumbo or pulled pork topped with mac and cheese, tapas, Taiwanese cuisine or a plain old sandwich to choose from. Prices range from 8 pounds for a bowl of seafood with rice to 5 pounds for a sandwich. The market was still open as of March 18, but communal seating has been removed, some employees are teleworking, and public events have been canceled.

After lunch, I headed to Monument station and the Sky Garden, a public indoor garden with a 360-degree view of London. Entry is free, but you need to book an entry ticket online (skygarden.london) several weeks in advance.

Sky Garden is “working to continue our operations as normal, with the implementation of additional cleaning and disinfection measures” during the coronavirus pandemic, it says on its website. Check with them and the British Museum to see if they’re open if you decide to go.

After the Sky Garden, I jumped on a Central Line tube train at Bank station and headed to Epping to get my car and drive home. The trip cost me 14.40 pounds in gas, 5 pounds for the Oyster card, 11.40 pounds for all my trips on the Tube, 7 pounds for lunch, and 6 pounds for parking, totaling just under 44 pounds for the day. That’s about the same as a round-trip rail ticket, but a much better way to spend the day than just sitting on a train — and they may stop running anyway if passenger numbers continue to fall during the coronavirus emergency.