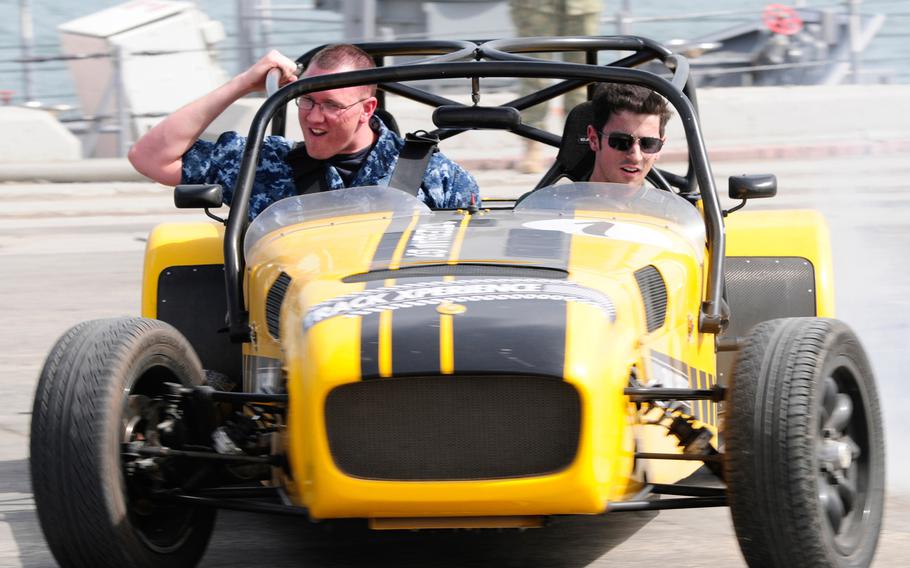 A sailor assigned to USS Typhoon takes a ride in a Caterham sports car April 17, 2013, with American F1 driver Alexander Rossi of Caterham Racing. Rossi spent the day with U.S. Navy units in Bahrain and will be racing at the Formula One Gulf Air Bahrain Grand Prix 2013, April 19. (Bryan Blair/U.S. Navy)

With the Formula 1 Grand Prix happening this weekend in Bahrain, a few sailors in Bahrain got a sneak preview of the event when F1 driver Alexander Rossi of Caterham Racing visited the sailors.

This is a preview of content that is only to Stars and Stripes Tablet Edition subscribers. To subscribe, please download our iPad app. Subscribers enjoy first access to the latest Stripes feature stories, exclusive photo galleries and more. The Stars and Stripes app is free to download from the Apple App Store. Tablet Edition subscriptions are regularly$3.99 a month. Taking advantage of our special introductory offer will give new subscribers up to four months for the price of one.