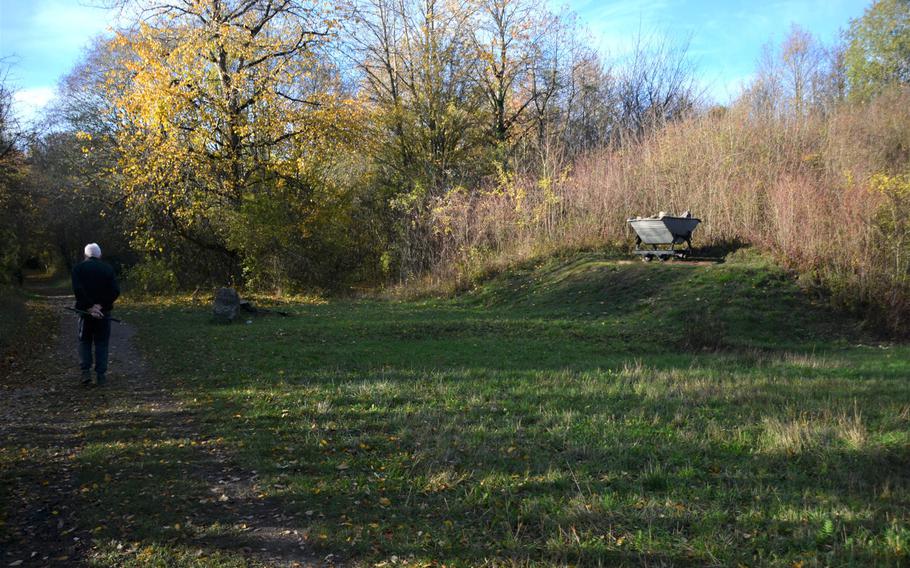 Buy Photo
Edgar Becker, 85, passes an old rail car that used to carry limestone to steelmills in Saarland during World War II, on the Alter Grenzweg near Berus, Germany. The Germans destroyed the train tracks that ran along the trail as the war drew to a close and the trail was turned into a hiking path years later. (Karin Zeitvogel/Stars and Stripes)

Buy Photo
Edgar Becker, 85, passes an old rail car that used to carry limestone to steelmills in Saarland during World War II, on the Alter Grenzweg near Berus, Germany. The Germans destroyed the train tracks that ran along the trail as the war drew to a close and the trail was turned into a hiking path years later. (Karin Zeitvogel/Stars and Stripes) 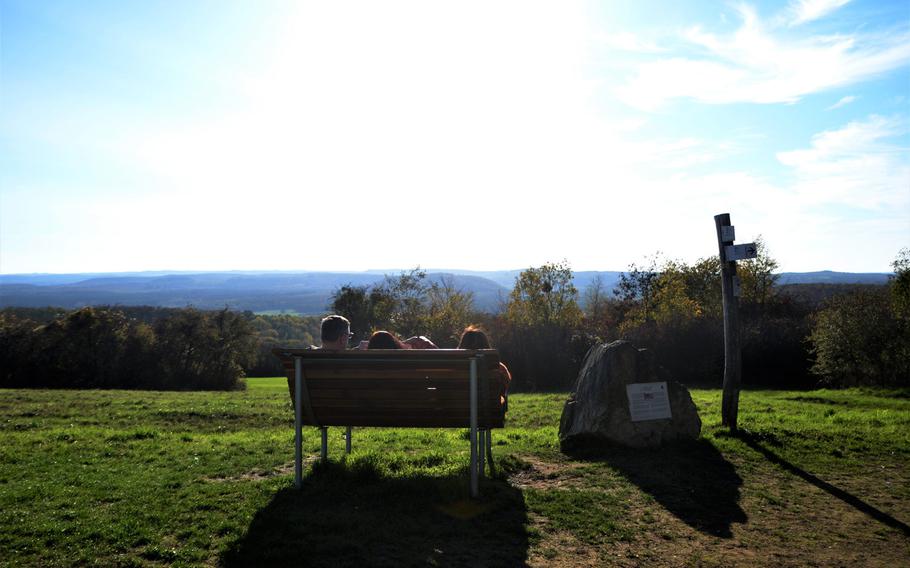 Buy Photo
A family relaxes on a sunbathing bench looking toward France, near the trailhead of the Alte Grenzweg in Berus, Germany on Oct. 30, 2020. The lightly trafficked 4.2-mile loop of the trail that crisscrosses in and out of France is ideal for those seeking fresh air and exercise as Germany and France toughen up coronavirus restrictions. (Karin Zeitvogel/Stars and Stripes) Buy Photo
Edgar Becker, 85, makes his way down a steep, slippery part of the Grenzweg hiking trail, which begins and ends in Berus, Germany. The lightly trafficked trail crisscrosses the French-German border and is ideal for getting fresh air and exercise while keeping away from others during the coronavirus pandemic. (Karin Zeitvogel/Stars and Stripes) 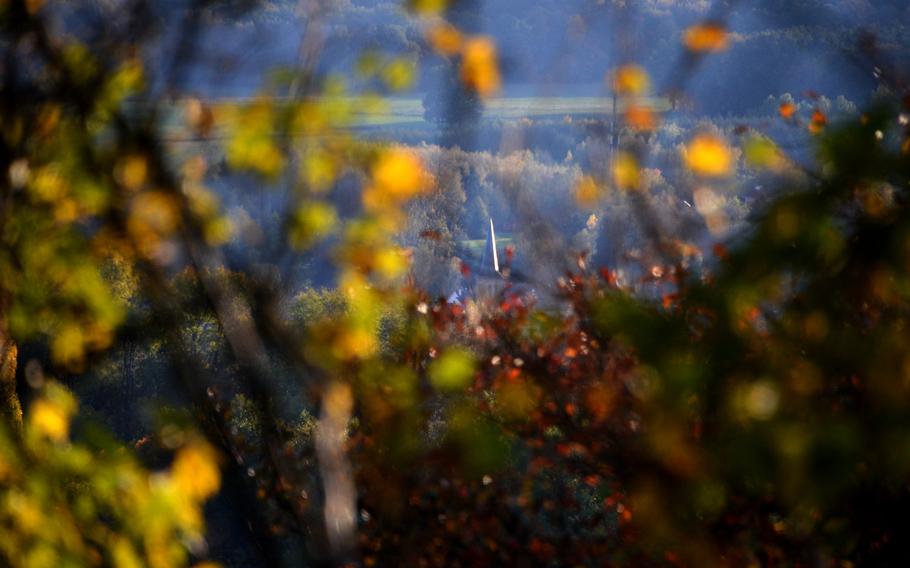 Buy Photo
The spire of the Catholic church in the French village of Merten is seen from the German part of a 4.2-mile trail that crisscrosses the French-German border after setting out from Berus, Germany. The spire survived when the church was bombed during World War II, and a new building was reconstructed around it, according to 85-year-old Edgar Becker, who has walked the trail for years. (Karin Zeitvogel/Stars and Stripes) Buy Photo
A monument to Europe in Berus, Germany, lies just above the starting point of a 4.2-mile trail that crisscrosses in and out of France as it passes across farmland and through forests. The lightly trafficked trail is ideal for getting exercise as coronavirus cases rise in Germany, although looking through the telescope on the monument is ill-advised. (Karin Zeitvogel/Stars and Stripes) Buy Photo
The village of Berus, Germany, lies just below the starting point of the 4.2-mile long hiking trail that crisscrosses in and out of France as it makes its way across farmland and through woods. The Alter Grenzweg, which is also called by its French name, Chemin de la Frontiere, is non-technical and well signposted. (Karin Zeitvogel/Stars and Stripes) Buy Photo
A couple on mountain bikes rides back to the starting point of the Alter Grenzweg trail in Berus, Germany. The lightly trafficked trail crisscrosses in and out of France. (Karin Zeitvogel/Stars and Stripes) 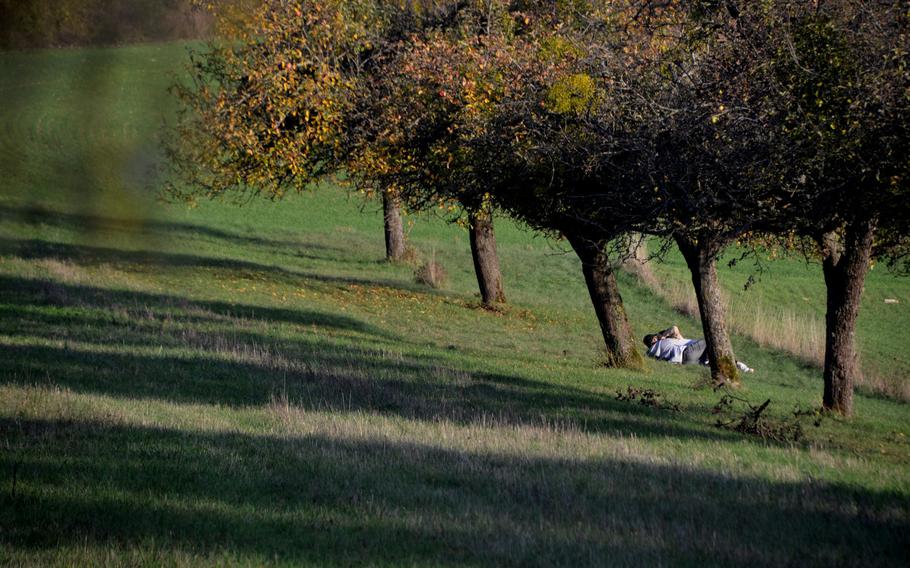 Buy Photo
A couple shares a moment under trees near the Alter Grenzweg trail that crisscrosses the German-French border near the town of Berus, Germany. Most people who were walking the lightly trafficked trail on Oct. 30, 2020 respected social distancing rules. (Karin Zeitvogel/Stars and Stripes) Buy Photo
A woman walks a safe distance behind a couple on a path that leads to France from the Alter Grenzweg trail, which crosses in and out of France, and starts and ends in Berus, Germany, on Oct. 30, 2020. French people who use the lightly trafficked trail have to complete an online form that said what time they left home, and carry it with them on the trail, to comply with tough coronavirus restrictions that went into effect in France on Oct. 29. (Karin Zeitvogel/Stars and Stripes) 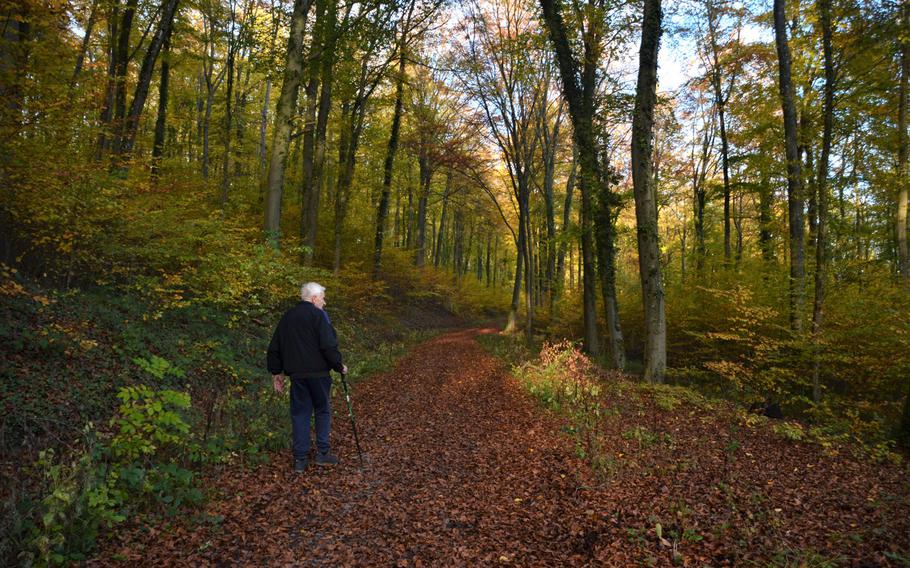 Buy Photo
Edgar Becker, 85, walks through a wooded part of the Alter Grenzweg hiking trail on Oct. 30, 2020. The lightly trafficked trail crisscrosses in and out of France from its starting point in Berus, Germany. (Karin Zeitvogel/Stars and Stripes)

Hiking the Alter Grenzweg trail near the southwestern German village of Berus, it’s hard to imagine that this border area was disputed for decades by the Germans and French and saw fierce fighting in World War II.

Gen. George Patton’s Third Army crossed the Saar River near this spot. Some nearby villages and the city of Saarlouis — known during the war as Saarlautern — around 5 miles away, were destroyed by allied bombs in 1944.

Today, the trail offers fresh air, the opportunity to get exercise without running into a lot of people, and expansive views of France.

It was for those reasons and the resurging coronavirus, which ruled out going to an exhibition in Saarlouis of the works of Robert Capa, the only photographer to land with the first wave of U.S. forces on Omaha Beach on D-Day, that I came to the trail.

It was a rare sunny October day, although I was told by 85-year-old Edgar Becker, who ended up accompanying me on a 4.2-mile loop of the trail after I asked him where it started, that sun and warmth are not uncommon in Berus. The village of around 2,000 has a microclimate that makes it the warmest place in Saarland, he said.

Becker, a widower since 2016, has walked and run the trail for years. That’s one of the reasons, he said, that he’s made it to 85 in such good shape.

Called the Chemin de la Frontiere in French, the trail starts just below the 50-foot-high Europe monument, made of two parallel concrete slabs, pierced at the top by metal poles. Dedicated 50 years ago, the monument symbolizes how “nationalist hostility” between Germany and France has been replaced with friendship, a plaque at its base reads.

There are binoculars on the viewing platform but I didn’t use them after seeing a handful of people, some maskless, pressing their faces against them to get a close-up look at the surrounding scenery. On a clear day, you get spectacular views from the trail without the binoculars.

Becker and I headed downhill, past an old rail car that used to carry limestone from nearby quarries, along narrow-gauge rail tracks to steel mills in Saarlouis. The region was once highly industrialized and had a plentiful supply of limestone to make steel.

We took a fork to the right and headed uphill through a wooded section until we came to open farmland and another structure on the trail, a cross of Lorraine. Charles de Gaulle, who led the Free French Forces during WWII and later became president of France, made the double-barred cross a symbol of resistance against the Nazis. It featured on the flags of Free French warships, the fuselages of their aircraft, and on the Order of Liberation medal, which was awarded to heroes of the liberation of France.

Becker and I stopped to chat with a mother and daughter who were taking the fork to the right, back to Bervilliers-en-Moselle, after getting the hour of exercise they were allowed under French coronavirus rules that had come into force a day earlier.

The French had to fill in a form, available on the internet, with the time they left home and their reason for being outdoors, and carry it with them, they said. Failure to do so could result in a fine of around $150 if a gendarme happened to check them. And yes, there were gendarmes out checking, the women said.

Becker and I turned left and stayed in Germany. As we walked across more farmland and back into the woods, roaming messages on my phone told me we were crisscrossing in and out of France. Observation told me there were no gendarmes.

As we made our way down a steep, leaf-covered slope, before turning left to head back toward the monument, I asked Becker about his memories of WWII, which ended when he was 9.

He and his family were evacuated to a town near Nuremberg, he told me. In 1944, he remembered being on a train with his grandfather when they stopped in the middle of a forest and were told to take cover as American planes flew overhead.

“Right after the Americans, some crows flew by and my grandfather quipped, ‘Those are Hitler’s planes.’ ”

The joke earned the grandfather a summons to the local police station, where, happily, he knew many of the officials, Becker said.

“ ‘Jakob,” the chief of police told him, ‘You can’t say that kind of thing. Be careful,’ ” Becker said his grandfather was told by the exasperated official, who let him go with a slap on the wrist.

Maybe a French gendarme would have done the same, but I’ll wait until virus restrictions have been lifted before I take one of the other branches of the Alter Grenzweg and dip into France.

DIRECTIONS: Putting Orannastrasse 20, 66802 Ueberherrn (the town just below Berus) in your GPS will take you to the monument. From there, the trail is a few yards downhill to the right. There’s a smaller lot a bit farther up the road on the right. The Alter Grenzweg is an hour from Kaiserslautern or Baumholder, 45 minutes from Ramstein and 90 minutes from Spangdahlem.

FOOD: There are snack bars, cafes, restaurants and supermarkets in the town of Ueberherrn, and the Margaretenhof in Berus offers a full menu and cafe service — but takeout only until the end of November, at least.

INFORMATION: The Alter Grenzweg can be found on the All Trails app at alltrails.com/mobile