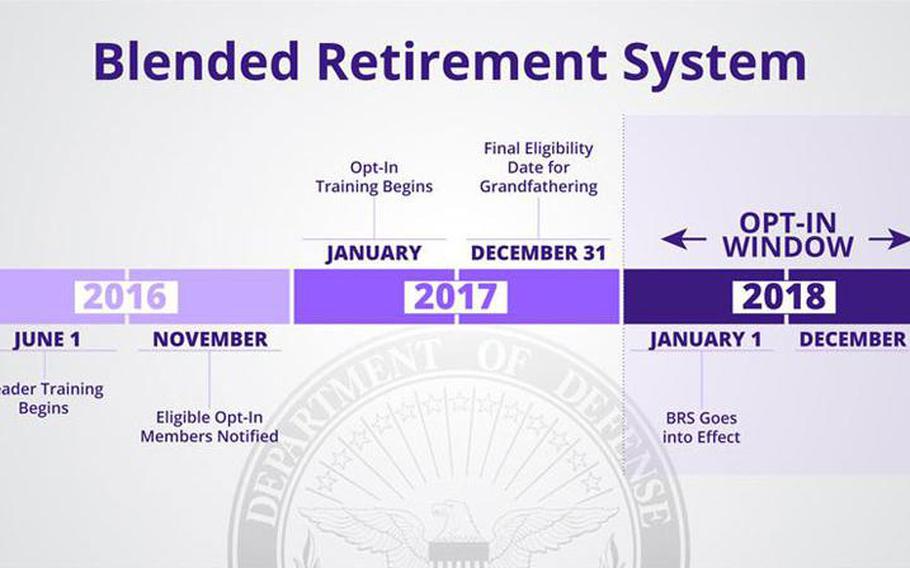 More than 740,000 currently serving active-duty members and 176,000 drilling Reserve and National Guard personnel are expected to opt in to the new Blended Retirement System when the choice becomes available in 2018 to military members with fewer than 12 years of service.

The opt-in estimates are the product of a “dynamic retention” computer model developed by RAND Corp. and used to predict how personnel will react to a new retirement choice. The BRS was designed by the Military Compensation and Retirement Modernization Commission and approved by Congress last year after lawmakers tweaked a few features.

The number of current members who will opt to leave their “High-3” retirement plan with its higher lifetime value for the near-term rewards and flexible features of the BRS is important to Department of Defense Board of Actuaries.

The three-member board is responsible for ensuring the Defense Department’s Military Retirement Fund is properly valued and actuarially sound. It held its annual meeting July 15 and accepted RAND’s estimate that a total of 916,754 active and reserve component members will opt into the BRS starting 16 months from now. That estimate is roughly half of the 1.8 million active-duty, Guard and Reserve members eligible to make the choice.

A transcript of that July meeting, however, shows the board and department actuaries embraced RAND’s numbers only reluctantly, as flawed approximations but also the best available. To understand why the number experts grumbled, we first need to review major features of the BRS.

The new plan is called blended because it combines an immediate but also smaller annuity after 20 or more years of service with a Thrift Savings Plan enhanced by government matching of member contributions of up to 4 percent of basic pay plus an automatic 1 percent government contribution for all BRS participants, whether they contribute or not to a TSP.

This 401(k)-like nest egg toward retirement is a portable benefit on leaving service. Veterans can roll the account into an employer 401(k) or continue to make contributions whether they served two years or 40 years in the military. Because this feature will benefit the great majority of members who leave service short of retirement eligibility at 20 years, the blended plan is expected to be a popular option, particularly with younger folks on their first or second enlistment and officers completing initial service obligation.

Committed careerists, however, are likely to stick with High-3 retirement, which will pay 20 percent more in lifetime annuities if full careers are a realistic goal.

The blended plan has two other features High-3 doesn’t.

By current law, BRS participants are to receive a one-time “continuation payment” at the 12-year mark that, at a minimum, must equal 2½ months of basic pay for active-duty members who agree to serve four more years or one-half month of active pay for reserve component personnel who make the same deal.

DOD pay officials wanted the continuation payment to be used solely as a retention tool. So they asked Congress this year to lift all restrictions on amounts paid, when paid and to whom. Both the House and Senate declined to grant such flexibility in their separate versions of the fiscal 2017 defense authorization bill. But both chambers did vote to relax the timing of this feature so continuation pay can be offered from the eighth to 12th year of service in exchange for serving a minimum of three more years.

The last key feature of the BRS allows those who reach retirement to receive in a lump sum 25 percent or 50 percent of their pre-old-age retirement annuities. In other words, here would be cash to help buy a home, start a business or pay off debts in return for reducing military annuities by one-quarter or one-half until age 67.

What bothered the Board of Actuaries about the RAND forecasts for number of members who will opt for the BRS is that no one has calculated yet how attractive the lump-sum feature will be. Another term for the missing ingredient is “personal discount rate.” Without that rate, which the board characterizes as a policy decision, RAND was forced to assume that no BRS member would elect the lump-sum distribution.

Because many will, however, the actuaries know the BRS opt-in estimates and therefore, projected costs to properly fund the new military retirement option are not precise enough to be acceptable. The board so advised Defense Secretary Ash Carter in a mid-July letter providing the board’s annual status report on the Military Retirement Fund.

“Although we are unable to opine on the analytical model used to produce RAND’s opt-in assumptions, we have approved [the Office of Actuary’s] reliance on these assumptions, produced by that model, because we have no better basis for projecting opt-in behavior,” the board advised.

“However, the significant uncertainty surrounding the opt-in process (for example with respect to the financial training to be provided to servicemembers) and other aspects of the BRS means the opt-in and other assumptions are likely to change as more experience and information about the new system (e.g., the discount rate to be used for lump sums) become available.”

Members who enter service on or after Jan. 1, 2018, have no choice; the BRS will be their retirement plan. Another group with no choice is members with 12 or more years of service by Dec. 31, 2017. They will be grandfathered under current High-3 retirement.

Congress rejected not only the department’s idea to eliminate the minimum continuation payment but three other changes sought to the BRS to save an estimated $5.4 billion on retirement through fiscal 2021. DOD officials wanted TSP matching to start in the fifth year of service rather than the third year. That would have dampened the value of the plan substantially for participants after their first enlistment.

Officials also wanted TSP matching to continue until retirement rather than end at 26 years of service, as the law now requires. Lawmakers decided that change would have benefited primarily senior officers, and rejected it.

The DOD also asked to raise maximum government contributions to TSP under the blended plan from 5 percent basic pay to 6 percent. Congress balked at the added cost and also reasoned the match should stay at 5 percent for parity with federal civilian TSP participants. DOD officials argued it’s not parity to match 5 percent of federal salaries against 5 percent of basic pay, ignoring that military folks get a large portion of pay as allowances.