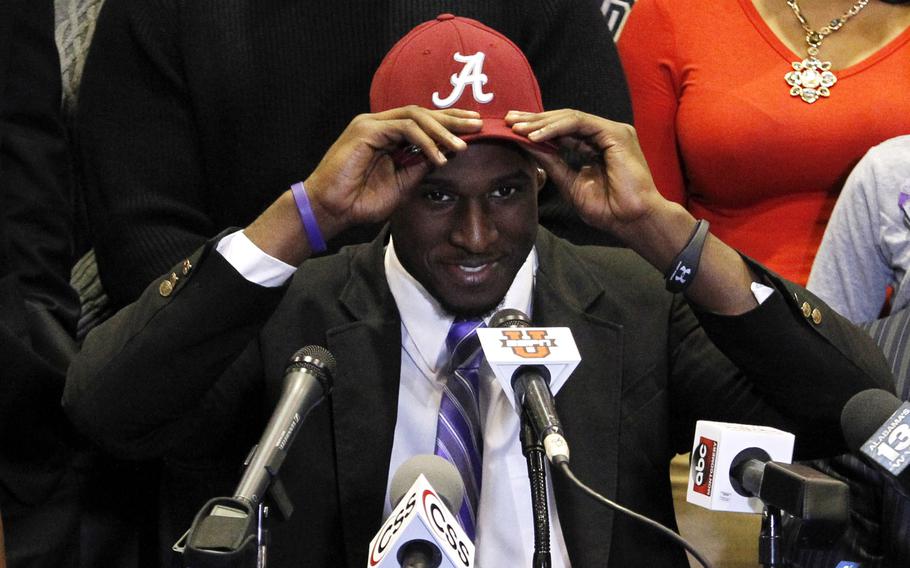 Rashaan Evans chooses Alabama as his destination to play college football Wednesday on national signing day in Auburn, Ala. (AP)

On signing day, Alabama is still No. 1.

A season without a national championship on the field didn't slow down coach Nick Saban on the recruiting trail. The five-star prospects flocked to Tuscaloosa, including one who went to high school at Auburn.

National signing day had coaches up at the crack of dawn and fax machines beeping on college campuses around the country -- though more and more recruits email their national letter of intent these days. Hats were donned, a few commitments were flipped and mostly the rich got richer: National champion Florida State, Ohio State, Stanford, Oklahoma and Notre Dame were among the programs that received high marks. And as usual, most of the Southeastern Conference got glittering grades from the experts. None better than Alabama.

The Crimson Tide sat atop the rankings for Rivals, Scout, 247sports and ESPN. Alabama signed six of 33 players given five-star ratings by Rivals, including Rashaan Evans, a linebacker from Auburn High School who didn't decide to roll with the Tide until Wednesday, passing joining his hometown Tigers. No other school had more than three five-stars.

"He kind of lapped the field," Tom Lemming of CBS Sports Network said about Saban.

This marks the third straight year and fifth time in the last six years Alabama has Rivals' top-ranked class. Ultimately, the strength of the class will be determined in a few years. Good luck topping the 2009 Alabama class with AJ McCarron, Trent Richardson, Eddie Lacy, D.J. Fluker and Dre Kirkpatrick. But when it comes to signing day grades, is Alabama's latest class Saban's best yet?

"Yes," said Mike Farrell, national recruiting analyst for Rivals.com. "They're competing against themselves, oftentimes. This is the highest point total we have ever had at Rivals. They broke the record last year and this year, they broke it again."

Other news and notes from signing day.

SARK ATTACK: Southern California's first signing day with Steve Sarkisian as coach could not have gone much better. Three of the highest-rated players that entered the day undecided picked the Trojans, starting with 360-pound offensive lineman Damien Mama from Bellflower, Calif.

Next up was Adoree' Jackson from Gardena, Calif. The five-star cornerback put his own spin on the pick-a-hat announcement ceremony by digging through a shopping bag for his choice. He pulled out a sports drink, a sneaker, some other stuff, before slapping on a USC hat. The theatrics fell a bit flat, but no doubt Trojans coaches and fans were entertained in the end.

"Growing up as a little kid, my favorite player was Reggie Bush," Jackson said.

Jackson was also considering UCLA, LSU and Florida. "Adoree' was the big surprise," Farrell said. "We had no idea what that kid was going to do."

The strong finish had USC ranked 10th in the nation by Rivals and Scout.

His father, who has said publicly he would rather have his son leave Michigan and go to Ohio State or Florida State, is now on board with that decision. McDowell's mother, Joya Crowe, wasn't at the announcement. She has said she had a bad experience at Michigan State and wants her son to go elsewhere.

Michigan was also in the mix for McDowell. Crowe's signature is not required on the letter of intent.

"Dad's willing to sign but they want mom on board," Farrell said.

Michigan State's official list of signees released Wednesday afternoon did not have McDowell's name on it.

Another bit of family drama was reportedly playing out in Oklahoma. Defensive end Deondre Clark of Oklahoma City was expected to sign with LSU, but now there's some uncertainty. Clark's family seems to be urging him to stay close to home and play for the Sooners, Farrell said.

ODDS AND ENDS: New Penn State coach James Franklin ended up signing a top-25 class that included five players who had been committed to Vanderbilt when Franklin was there. ... Franklin's departure crushed Vanderbilt's class, though new Commodores coach Derek Mason did manage to lure one stud recruit, defensive end Nifae Lealao from Sacramento, Calif., away from his old school, Stanford. ... Charlie Strong's first recruiting class was not quite up to the usual Texas top-10 standards. More like top-20. Strong's ties to SEC country, which the Longhorns hope will extend their reach in the near future, did help land defensive tackle Poona Ford from Hilton Head, S.C. Meanwhile, Texas A&M's class drew consensus top-10 grades.