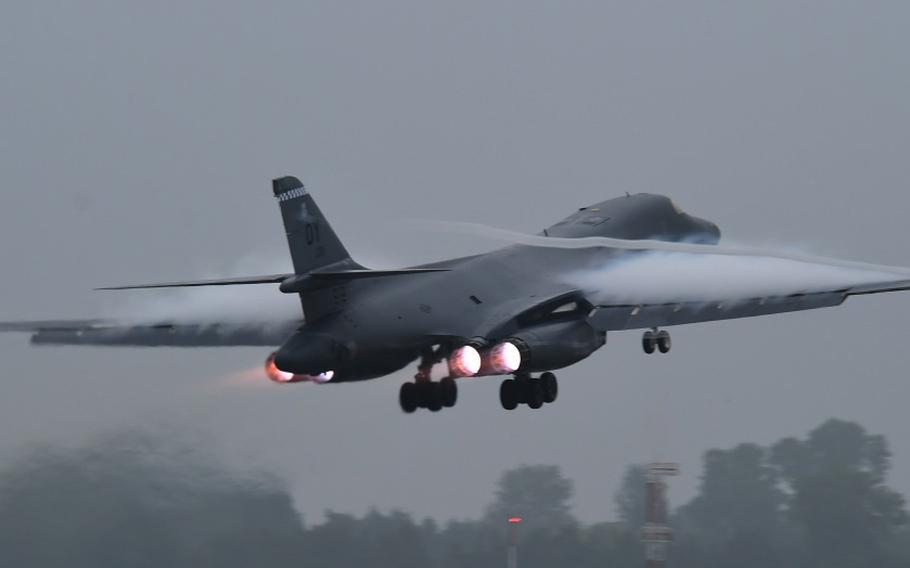 A U.S. Air Force B-1B Lancer takes off in support of an exercise in the Baltics from RAF Fairford, England, on June 2, 2018, shortly before a safety stand-down grounded the fleet. (Emily Copeland/Courtesy of the U.S. Air Force)

The Air Force’s B-1B Lancers have been cleared to resume flying after a safety stand-down that grounded the fleet on June 7 because of concerns about the plane’s ejection seat components, officials said.

Air Force Global Strike Command announced Tuesday that the B-1B would return to the skies sometime this week, despite an ongoing investigation into what caused an ejection seat to malfunction during an in-flight emergency on one of the bombers last month.

A B-1 was forced to make an emergency landing May 1 at Midland, Texas, about 150 miles west of where it’s assigned at Dyess Air Force Base in Abilene.

“We have high confidence that the fleet’s egress systems are capable and the fleet is ready to return to normal flight operations,” said Maj. Gen. Thomas Bussiere, 8th Air Force commander, in a statement Tuesday. Bussiere is responsible for the Air Force bomber force.

On June 8, a day after Gen. Robin Rand, Air Force Global Strike Command commander, ordered the safety stand-down, the Air Force revealed that during an investigation of the Midland incident, an issue with ejection seat components was discovered, prompting the fleet’s grounding.

The stand-down allowed the command time to thoroughly evaluate the egress components and determine potential risks before returning to flight, officials said Tuesday. The investigation is ongoing.

Secretary of the Air Force Heather Wilson revealed more details about the May 1 incident during a talk Monday at the Defense Communities summit in Washington, Air Force Times reported.

Wilson said an B-1 instructor pilot out training with a “brand-new crew” less than two years out of college experienced a fire in the wing, according to a transcript of her remarks, published Tuesday by Air Force Times.

“They go through their checklists,” she said. “They do everything they are supposed to do and they still have an indication that they have a fire.

“The next thing on the checklist is to eject from the airplane,” Wilson said, according to Air Force Times.

When the first crew member pulled the handle to eject, the cover came off the seat but nothing else happened, Wilson said.

“Within two seconds of knowing that had happened the aircraft commander says, ‘Cease ejection. We’ll try to land,’” Wilson was reported to have said.

The B-1’s four crew members landed safely and were not injured, Dyess officials said at the time. There were no munitions on the aircraft.