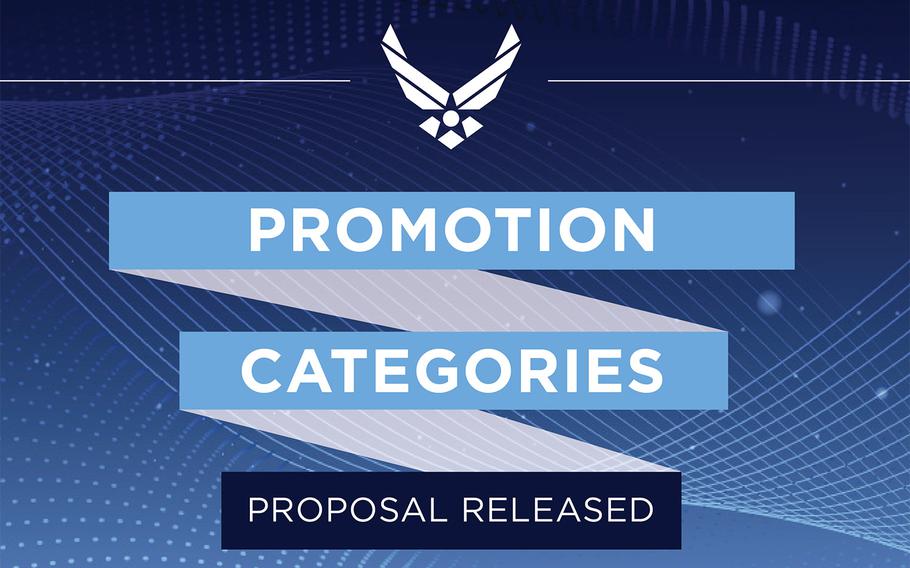 WASHINGTON – The Air Force is planning to overhaul its long-standing officer promotion system this year by dividing its largest category of officers into smaller, more specific groups, the service announced Friday.

The proposed changes would divide the promotion category known as Line of the Air Force, which includes some 87 percent of the service’s commissioned officers, into six categories from which officers would be selected for future promotions, said Lt. Gen. Brian Kelly, the service’s personnel chief. Air Force officials announced the proposed changes via a memorandum to top commanders sent Friday and they are seeking input from airmen on the proposal though their chains of command until July 31.

The changes are meant to “incentivize the right education, training and unique experiences which are going to be important to building the right bench of officers who have diverse experience and capabilities at all levels,” Kelly said. “They allow us more developmental agility to meet evolving mission needs, so that we don’t have this one-size-fits-all process. That agility ultimately lets us provide the best warfighters we can for the nation.”

The service hopes to approve the changes by Sept. 1, and they could be implemented by spring 2020, Kelly said.

The Air Force already has specialized promotion categories for officers such as lawyers, doctors, nurses and chaplains that would not be impacted by the proposed changes. But nearly every other officer specialty is lumped into the Line of the Air Force category, meaning pilots, public affairs officers, engineers and more than two dozen other career fields, all compete directly with each other for promotions within their ranks.

The system can at times produce too many officers at the lieutenant colonel or colonel level in one career field and not enough in another, outgoing Air Force Secretary Heather Wilson said earlier this month. It can also penalize certain officers who spend time away from the service pursuing an advanced degree, said Wilson, whose last day at the Pentagon is Friday.

Kelly detailed the six new categories and which officer career fields that each would include. They are:

Shon Manasco, the assistant secretary of the Air Force for manpower and reserve affairs, said the changes would better incentivize officers working in those fields to advance their skills outside the service. For example, he said, cyber officers could spend two or three years working at an academic institution or a private technology company.

“That’s a really big commitment to do that, but we know the benefits would accrue to that individual and to the force at large,” Manasco said. “But in the current design that would take them out of their traditional career path, and that may not always incentivize those airmen to seek out those opportunities” because it could negatively impact their chances to be promoted.

Kelly said the Air Force has spent 18 months studying the proposed changes, but the service does not want to implement them until it has a chance to hear from troops, who would be impacted by the proposal. He said Air Force leaders would send briefing teams to major installations and conduct virtual presentations to inform airmen about the potential changes.

“While these changes have been reviewed and discussed at leadership levels, we realize this would be a significant change for the officer corps,” the memorandum announcing the changes states. “Rather than make an immediate decision, we thought it best to share the draft with commanders first in order to engage in a dialogue with the officers assigned to you and solicit feedback before proceeding.”